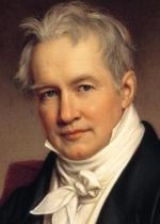 Overview
Friedrich Wilhelm Heinrich Alexander Freiherr von Humboldt ( September 14, 1769 – May 6, 1859) was a German naturalist and explorer, and the younger brother of the Prussian minister, philosopher and linguist
Linguistics
Linguistics is the scientific study of human language. Linguistics can be broadly broken into three categories or subfields of study: language form, language meaning, and language in context....
Wilhelm von Humboldt
Wilhelm von Humboldt
Friedrich Wilhelm Christian Karl Ferdinand Freiherr von Humboldt was a German philosopher, government functionary, diplomat, and founder of Humboldt Universität. He is especially remembered as a linguist who made important contributions to the philosophy of language and to the theory and practice...
(1767–1835). Humboldt's quantitative work on botanical
Botany
Botany, plant science, or plant biology is a branch of biology that involves the scientific study of plant life. Traditionally, botany also included the study of fungi, algae and viruses...
geography
Geography
Geography is the science that studies the lands, features, inhabitants, and phenomena of Earth. A literal translation would be "to describe or write about the Earth". The first person to use the word "geography" was Eratosthenes...
laid the foundation for the field of biogeography
Biogeography
Biogeography is the study of the distribution of species , organisms, and ecosystems in space and through geological time. Organisms and biological communities vary in a highly regular fashion along geographic gradients of latitude, elevation, isolation and habitat area...
.

Between 1799 and 1804, Humboldt travelled extensively in Latin America, exploring and describing it for the first time in a manner generally considered to be a modern scientific point of view.

Devoted from my earliest youth to the study of nature, feeling with enthusiasm the wild beauties of a country guarded by mountains and shaded by ancient forests, I experienced in my travels, enjoyments which have amply compensated for the privations inseparable from a laborious and often agitated life.

One of the noblest characteristics which distinguish modern civilization from that of remoter times is, that it has enlarged the mass of our conceptions, rendered us more capable of perceiving the connection between the physical and intellectual world, and thrown a more general interest over objects which heretofore occupied only a few scientific men, because those objects were contemplated separately, and from a narrower point of view.

The expression of vanity and self-love becomes less offensive, when it retains something of simplicity and frankness.

Our imagination is struck only by what is great; but the lover of natural philosophy should reflect equally on little things.

In order to ameliorate without commotion new institutions must be made, as it were, to rise out of those which the barbarism of centuries has consecrated. It will one day seem incredible that until the year 1826 there existed no law in the Great Antilles to prevent the sale of young infants and their separation from their parents, or to prohibit the degrading custom of marking the negroes with a hot iron, merely to enable these human cattle to be more easily recognized.

The most powerful influence exercised by the Arabs on general natural physics was that directed to the advances of chemistry; a science for which this race created a new era.(...) Besides making laudatory mention of that which we owe to the natural science of the Arabs in both the terrestrial and celestial spheres, we must likewise allude to their contributions in separate paths of intellectual development to the general mass of mathematical science.