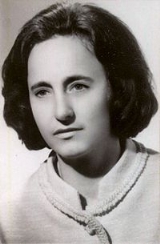 Encyclopedia
Elena Ceaușescu was the wife of Romania
Romania
Romania is a country located at the crossroads of Central and Southeastern Europe, on the Lower Danube, within and outside the Carpathian arch, bordering on the Black Sea...
's Communist leader Nicolae Ceaușescu
Nicolae Ceausescu
Nicolae Ceaușescu was a Romanian Communist politician. He was General Secretary of the Romanian Communist Party from 1965 to 1989, and as such was the country's second and last Communist leader...
, and Deputy Prime Minister
Deputy Prime Minister
A deputy prime minister or vice prime minister is, in some counties, a government minister who can take the position of acting prime minister when the prime minister is temporarily absent. The position is often likened to that of a vice president, but is significantly different, though both...
of Romania.

She was born Elena Petrescu into a peasant family in Petrești
Petresti, Dâmbovita
Petreşti is a commune in Dâmboviţa County, southern Romania with a population of 5,969 people. It is composed of seven villages: Coada Izvorului, Ghergheşti, Greci, Ioneşti, Petreşti, Potlogeni-Deal and Puntea de Greci....
commune
Communes of Romania
A commune is the lowest level of administrative subdivision in Romania. There are 2686 communes in Romania. The commune is the rural subdivision of a county .There is no clear restriction on the population of a commune, even though when a commune...
, Dâmboviţa County
Dâmbovita County
Dâmbovița ; also spelt Dîmbovița is a county of Romania, in Muntenia, with the capital city at Târgoviște.-Demographics:In 2002, it had a population of 541,763 and the population density was 134/km²...
, in the informal region of Wallachia
Wallachia
Wallachia or Walachia is a historical and geographical region of Romania. It is situated north of the Danube and south of the Southern Carpathians...
. Her family was supported by her father's job as a ploughman. Her records show she left school only with a good mark in needlework in primary school. After primary school, she moved along with her brother to Bucharest
Bucharest
Bucharest is the capital municipality, cultural, industrial, and financial centre of Romania. It is the largest city in Romania, located in the southeast of the country, at , and lies on the banks of the Dâmbovița River....
, where she worked as a laboratory assistant before getting a job at a textile factory. She joined the Romanian Communist Party
Romanian Communist Party
The Romanian Communist Party was a communist political party in Romania. Successor to the Bolshevik wing of the Socialist Party of Romania, it gave ideological endorsement to communist revolution and the disestablishment of Greater Romania. The PCR was a minor and illegal grouping for much of the...
in 1937 and met 21-year-old Nicolae Ceauşescu in 1939. Ceaușescu was instantly smitten by her; reportedly he never looked at another woman in a sexual way again. Their relationship was interrupted by Ceaușescu's frequent stints in prison, but they finally married on December 23, 1947.

After the Communists took power, Ceaușescu worked as a secretary in the Ministry of Foreign Affairs and was an unimportant figure until her husband became general secretary
General secretary
-International intergovernmental organizations:-International nongovernmental organizations:-Sports governing bodies:...
of the party. Ceaușescu was fluent in French
French language
French is a Romance language spoken as a first language in France, the Romandy region in Switzerland, Wallonia and Brussels in Belgium, Monaco, the regions of Quebec and Acadia in Canada, and by various communities elsewhere. Second-language speakers of French are distributed throughout many parts...
. Starting in July 1972, Elena Ceaușescu was given various offices at senior levels in the Romanian Communist Party
Romanian Communist Party
The Romanian Communist Party was a communist political party in Romania. Successor to the Bolshevik wing of the Socialist Party of Romania, it gave ideological endorsement to communist revolution and the disestablishment of Greater Romania. The PCR was a minor and illegal grouping for much of the...
. In June 1973 she became a member of the Politburo of the Romanian Communist Party, becoming the second most important and influential person after Ceauşescu himself. She was deeply involved in party administration alongside her husband, and was one of the few spouses of a Communist Party boss to become a power in her own right.

Ceaușescu frequently accompanied her husband on official visits abroad, and it was during the state visit to the People's Republic of China
People's Republic of China
China , officially the People's Republic of China , is the most populous country in the world, with over 1.3 billion citizens. Located in East Asia, the country covers approximately 9.6 million square kilometres...
in June 1971, where she noticed how Chairman Mao Zedong
Mao Zedong
Mao Zedong, also transliterated as Mao Tse-tung , and commonly referred to as Chairman Mao , was a Chinese Communist revolutionary, guerrilla warfare strategist, Marxist political philosopher, and leader of the Chinese Revolution...
's wife, Jiang Qing
Jiang Qing
Jiang Qing was the pseudonym that was used by Chinese leader Mao Zedong's last wife and major Communist Party of China power figure. She went by the stage name Lan Ping during her acting career, and was known by various other names during her life...
had her own position of real power in the state, that Elena's remarkable rise was inspired. In July 1971 she was elected a member of the Central Commission on Socio-Economic Forecasting, and in July 1972 she became a full member of the Romanian Communist Party Central Committee. She was elected a member of the Executive Committee in June 1973, after being proposed by Emil Bodnăraş
Emil Bodnaras
Emil Bodnăraş was an influential Romanian Communist politician, an army officer, and a Soviet agent...
. In November 1974, at the 11th party congress, she was made a member of the (renamed) political executive committee and in January 1977 became a member of the highest party body, the Permanent Bureau of the Political Executive Committee. In March 1980, she was made a First Deputy Prime Minister.

Ceaușescu was the object of a personality cult as intense as that of her husband, which exalted her as the "Mother of the Nation." By all accounts, her vanity and desire for honours exceeded that of her husband. As with her husband, Romanian Television
Romanian television
Romanian television may refer to:* Communications media in Romania* Televiziunea Română, TVR, the national television network* List of Romanian language television channels...
was under strict orders to take great care portraying her on screen. For instance, she was never supposed to be shown in profile because of her homely appearance (though she'd been very attractive in her youth) and large nose. Publicly, Ceauşescu said that it was an honor to be referred to as "comrade", but Romanian expatriates in the United States
United States
The United States of America is a federal constitutional republic comprising fifty states and a federal district...
frequently referred to her as "Madame Ceauşescu" with great disdain.

Ceaușescu was outlived by her almost 100-year old mother, her brother Gheorghe Petrescu (also an important figure in the party) and her three children: Valentin
Valentin Ceausescu
Valentin Ceaușescu is a Romanian physicist.Valentin is the son of former President of Romania Nicolae Ceaușescu and his wife, Elena Ceaușescu...
(b. 1948), Zoia
Zoia Ceausescu
Elena Zoia Ceaușescu was a Romanian mathematician, the daughter of Communist leader Nicolae and his wife, Elena Ceaușescu.She did her studies at the University of Bucharest. After completing her Ph.D. in mathematics, she worked as a researcher at the Institute of Mathematics of the Romanian...
(1949–2006) and Nicu
Nicu Ceausescu
Nicu Ceaușescu was the youngest child of Romanian leader Nicolae and Elena Ceaușescu. He was a close associate of his father's political regime and considered the President's heir apparent.-Life during Communism:...
(1951–1996), who was also a very important member of the Romanian Communist Party.


Reputation as a chemical researcher

In 1957 she was a research scientist at ICECHIM (National Institute for Chemical Research). In the early 1960s she was reported to be secretary of the party committee of the Bucharest Central Institute of Chemical Researches, and, when her husband Ceauşescu took over the party leadership in March 1965, she was listed as the institute's director. In December of the same year, she was elected a member of the newly established National Council of Scientific Research, and in September 1966 she was awarded the Order of Scientific Merit First Class.

Ceaușescu was given many honorary awards for scientific achievement in the field of polymer
Polymer
A polymer is a large molecule composed of repeating structural units. These subunits are typically connected by covalent chemical bonds...
chemistry
Chemistry
Chemistry is the science of matter, especially its chemical reactions, but also its composition, structure and properties. Chemistry is concerned with atoms and their interactions with other atoms, and particularly with the properties of chemical bonds....
during the period when her husband ruled Romania
Romania
Romania is a country located at the crossroads of Central and Southeastern Europe, on the Lower Danube, within and outside the Carpathian arch, bordering on the Black Sea...
. However, her educational and scientific achievements are disputed.

Despite leaving grammar school at the age of 14, Ceauşescu graduated from the University of Bucharest with a PhD in polymer chemistry and top in a class of 100 women with the honor of summa cum laude. Her thesis has 162 pages, 32 tables, 40 figures and 440 references and describes the invention of a very valuable artificial material. Critics consider it unlikely that a textile worker would have been able to write a thesis in chemistry. After the Revolution of 1989
Romanian Revolution of 1989
The Romanian Revolution of 1989 was a series of riots and clashes in December 1989. These were part of the Revolutions of 1989 that occurred in several Warsaw Pact countries...
, several scientists have claimed that Elena had forced them to write papers in her name. Claims have also arisen that the university gave her the honor of the doctorate solely because of her political position.

Most of the respected academic institutions and universities in the West refused to acknowledge her alleged academic merit. She was made a member of the Illinois Academy of Sciences. Elena Ceauşescu later complained that she never heard of Illinois
Illinois
Illinois is the fifth-most populous state of the United States of America, and is often noted for being a microcosm of the entire country. With Chicago in the northeast, small industrial cities and great agricultural productivity in central and northern Illinois, and natural resources like coal,...
and that the membership was given by the "dirty Jew". President of the Academy of Sciences was Jewish-American chemist Emanuel Merdinger at that time. She allegedly obtained these awards with money, instead of merit.

In March 1974, she was made a member of the Romanian Academy's Section for Chemical Sciences. At the time when she wanted to receive her doctorate from the Bucharest Faculty of Chemistry, she met with strong opposition from respected Romanian chemist Costin D. Nenițescu
Costin Nenitescu
Costin D. Neniţescu was a prominent Romanian chemist, and a professor at the Polytechnic University of Bucharest. He was a member of the Romanian Academy, a corresponding member of the German Academy of Sciences in Berlin, and a member of the Leopoldina Academy of Natural Scientists in...
, the dean of the faculty. She was forced instead to present her thesis to Cristofor Simionescu and Ioan Ursu at the University of Iași, where she met with complete success.

She was sometimes nicknamed "Codoi", referring to her alleged mispronunciation of the name of the chemical compound CO2
Carbon dioxide
Carbon dioxide is a naturally occurring chemical compound composed of two oxygen atoms covalently bonded to a single carbon atom...
, being mocked by many, including an official during her show trial. "Codoi" also means "big tail" in Romanian
Romanian language
Romanian Romanian Romanian (or Daco-Romanian; obsolete spellings Rumanian, Roumanian; self-designation: română, limba română ("the Romanian language") or românește (lit. "in Romanian") is a Romance language spoken by around 24 to 28 million people, primarily in Romania and Moldova...
, therefore the comic effect created by her alleged mispronunciation.