Encyclopedia
The Greater Romania Party is a Romania
Romania
Romania is a country located at the crossroads of Central and Southeastern Europe, on the Lower Danube, within and outside the Carpathian arch, bordering on the Black Sea...
n radical right-wing, ultra-nationalist
Nationalism
Nationalism is a political ideology that involves a strong identification of a group of individuals with a political entity defined in national terms, i.e. a nation. In the 'modernist' image of the nation, it is nationalism that creates national identity. There are various definitions for what...
political party, led by Corneliu Vadim Tudor
Corneliu Vadim Tudor
Corneliu Vadim Tudor is leader of the Greater Romania Party , writer, journalist and a Member of the European Parliament...
. The party is sometimes referred to in English as the Great Romania Party.

It briefly participated in government
Red Quadrilateral
The Red Quadrilateral was a term used to describe the Romanian government between the 1992 and 1996 legislative elections...
from 1993 to 1995 (in Nicolae Văcăroiu
Nicolae Vacaroiu
Nicolae Văcăroiu is a Romanian politician, member of the Social Democratic Party, who served as Prime Minister between 1992 and 1996. Before the 1989 Revolution he worked at the Committee for State Planning, together with Theodor Stolojan....
's cabinet). In 2000, Tudor received the second largest number of votes in Romania's presidential elections, partially as a result of protest votes lodged by Romanians frustrated with the fractionalization and mixed performance of the 1996-2000 Romanian Democratic Convention
Romanian Democratic Convention
The Romanian Democratic Convention was an electoral alliance of several political parties of Romania, active from early 1992 until 2000....
government. Tudor's second place position ensured he would compete in the second round run-off against former president and Romanian Social Democratic Party (PDSR) candidate Ion Iliescu
Ion Iliescu
Ion Iliescu served as President of Romania from 1990 until 1996, and from 2000 until 2004. From 1996 to 2000 and from 2004 until his retirement in 2008, Iliescu was a Senator for the Social Democratic Party , whose honorary president he remains....
, who won by a large margin. Parallels are often drawn with the situation in France
France
The French Republic , The French Republic , The French Republic , (commonly known as France , is a unitary semi-presidential republic in Western Europe with several overseas territories and islands located on other continents and in the Indian, Pacific, and Atlantic oceans. Metropolitan France...
two years later, when far right Front National
Front National (France)
The National Front is a political party in France. The party was founded in 1972, seeking to unify a variety of French far-right currents of the time. Jean-Marie Le Pen was the party's first leader and the undisputed centre of the party from its start until his resignation in 2011...
Party leader Jean-Marie Le Pen
Jean-Marie Le Pen
Jean-Marie Le Pen is a French far right-wing and nationalist politician who is founder and former president of the Front National party. Le Pen has run for the French presidency five times, most notably in 2002, when in a surprise upset he came second, polling more votes in the first round than...
similarly drew the second largest number of votes and was elevated, but defeated, in the presidential run-off against Jacques Chirac
Jacques Chirac
Jacques René Chirac is a French politician who served as President of France from 1995 to 2007. He previously served as Prime Minister of France from 1974 to 1976 and from 1986 to 1988 , and as Mayor of Paris from 1977 to 1995.After completing his studies of the DEA's degree at the...
.

Although Tudor clearly remained the central figure in the PRM, in March 2005 he briefly stepped down from the party presidency in favour of Corneliu Ciontu
Corneliu Ciontu
Corneliu Ciontu is a Romanian politician, and a current vice-president of the Conservative Party. In November 2005, he founded the People's Party, which was blocked in justice court.In August 2006 Corneliu Ciontu became the Vicepresident of New Generation Party...
. A primary objective of the move was to provide the appearance of a shift toward the political center and to attempt to align PRM with the European People's Party
European People's Party
The European People's Party is a pro-European centre-right European political party. The EPP was founded in 1976 by Christian democratic parties, but later it increased its membership to include conservative parties and parties of other centre-right perspectives.The EPP is the most influential of...
(EPP) bloc in the European Parliament
European Parliament
The European Parliament is the directly elected parliamentary institution of the European Union . Together with the Council of the European Union and the Commission, it exercises the legislative function of the EU and it has been described as one of the most powerful legislatures in the world...
. During this period the PRM also briefly changed its name to the Greater Romania's People Party. EPP, however, rejected the PRM as a potential member. Tudor stated he refused to join the EPP because of its lack of identity. In June 2005, Tudor asserted that he had decided the new leadership had distanced itself from the founding principles of the party, and he sacked the new leadership and reverted the party's name back to simply the "Greater Romania Party". In November 2005, Ciontu, along with a small faction of the PRM, formed their own party, the People's Party
People's Party (Romania)
The People's Party was a centre-right Christian-Democratic party in Romania, formed in November 2005 by Corneliu Ciontu, previously the president and vice-president of the Greater Romania Party....
, which has since merged with the New Generation – Christian Democratic Party.

The party was founded in 1991 by Tudor and his literary mentor, the writer Eugen Barbu
Eugen Barbu
Eugen Barbu was a Romanian modern novelist, short story writer, journalist, and correspondent member of the Romanian Academy. The latter position was vehemently criticized by those who contended that he plagiarized in his novel Incognito and for the anti-Semitic campaigns he initiated in the...
, one year after Tudor launched the România Mare weekly magazine, which remains the most important propaganda tool of the PRM. Tudor subsequently launched a companion daily newspaper called Tricolorul. The historical expression Greater Romania
Greater Romania
The Greater Romania generally refers to the territory of Romania in the years between the First World War and the Second World War, the largest geographical extent of Romania up to that time and its largest peacetime extent ever ; more precisely, it refers to the territory of the Kingdom of...
refers to the idea of recreating the former Kingdom of Romania
Kingdom of Romania
The Kingdom of Romania was the Romanian state based on a form of parliamentary monarchy between 13 March 1881 and 30 December 1947, specified by the first three Constitutions of Romania...
which existed during the interwar period. Having been the largest entity to bear the name of Romania, the frontiers were marked with the intent of uniting most territories inhabited by ethnic Romanians
Romanians
The Romanians are an ethnic group native to Romania, who speak Romanian; they are the majority inhabitants of Romania....
into a single country; and it is now a rallying cry for Romanian nationalists. Due to internal conditions under Communism
Communist Romania
Communist Romania was the period in Romanian history when that country was a Soviet-aligned communist state in the Eastern Bloc, with the dominant role of Romanian Communist Party enshrined in its successive constitutions...
after World War II
World War II
World War II, or the Second World War , was a global conflict lasting from 1939 to 1945, involving most of the world's nations—including all of the great powers—eventually forming two opposing military alliances: the Allies and the Axis...
, the expression's use was forbidden in publications until 1990, after the 1989 Romanian Revolution.) 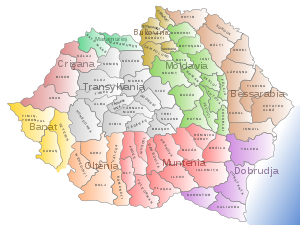 Both the ideology and the main political focus of the Greater Romania Party are reflected in frequently strongly nationalistic articles written by Tudor. For example, in his magazine there is a permanent column called simply Unguri ("Hungarians"), in which he fights alleged anti-Romanian conspiracies of the ethnic Hungarian party
Democratic Union of Hungarians in Romania
The Democratic Union of Hungarians in Romania, is the main political organisation representing the ethnic Hungarians of Romania....
.

In 2003, Tudor said he would no longer engage in discourse against Jews
Jews
The Jews , also known as the Jewish people, are a nation and ethnoreligious group originating in the Israelites or Hebrews of the Ancient Near East. The Jewish ethnicity, nationality, and religion are strongly interrelated, as Judaism is the traditional faith of the Jewish nation...
and Judaism
Judaism
Judaism ) is the "religion, philosophy, and way of life" of the Jewish people...
or deny the Holocaust
The Holocaust
The Holocaust , also known as the Shoah , was the genocide of approximately six million European Jews and millions of others during World War II, a programme of systematic state-sponsored murder by Nazi...
(see Corneliu Vadim Tudor
Corneliu Vadim Tudor
Corneliu Vadim Tudor is leader of the Greater Romania Party , writer, journalist and a Member of the European Parliament...
). He also said that he had become, in his own words, a "philo-Semite
Philo-Semitism
Philo-Semitism or Judeophilia is an interest in, respect for, and appreciation of the Jewish people, their historical significance and the positive impacts of Judaism in the history of the western world, in particular, generally on the part of a gentile...
". In subsequent months he and some of his supporters traveled to Poland
Poland
Poland , officially the Republic of Poland , is a country in Central Europe bordered by Germany to the west; the Czech Republic and Slovakia to the south; Ukraine, Belarus and Lithuania to the east; and the Baltic Sea and Kaliningrad Oblast, a Russian exclave, to the north...
to visit the Auschwitz concentration camp
Auschwitz concentration camp
Concentration camp Auschwitz was a network of Nazi concentration and extermination camps built and operated by the Third Reich in Polish areas annexed by Nazi Germany during World War II...
; and, despite strong objections from the family of slain Israel
Israel
The State of Israel is a parliamentary republic located in the Middle East, along the eastern shore of the Mediterranean Sea...
i Prime Minister
Prime Minister of Israel
The Prime Minister of Israel is the head of the Israeli government and the most powerful political figure in Israel . The prime minister is the country's chief executive. The official residence of the prime minister, Beit Rosh Hamemshala is in Jerusalem...
Yitzhak Rabin
Yitzhak Rabin
' was an Israeli politician, statesman and general. He was the fifth Prime Minister of Israel, serving two terms in office, 1974–77 and 1992 until his assassination in 1995....
and many Jewish organizations, Tudor illegally erected a statue in memory of Rabin in the city of Braşov
Brasov
Brașov is a city in Romania and the capital of Brașov County.According to the last Romanian census, from 2002, there were 284,596 people living within the city of Brașov, making it the 8th most populated city in Romania....
(for which he was found guilty and fined). During this period, Tudor hired Nati Meir
Nati Meir
Nati Meir is a Jewish-Romanian politician and member of the Romanian Chamber of Deputies from 2004 to 2008. He became a member of the Romanian Chamber of Deputies on the lists of the Greater Romania Party, but from April 2005 he was an independent member.-References:...
, a Jewish advisor, who ran and won as a PRM candidate for the Romanian Chamber of Deputies. Tudor also hired an Israeli public relations firm, Arad Communications, to run his campaign.