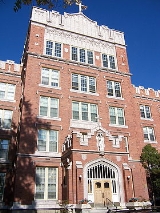 Encyclopedia
A seminary, theological college, or divinity school is an institution of secondary or post-secondary education for educating students (sometimes called seminarians) in theology
Theology
Theology is the systematic and rational study of religion and its influences and of the nature of religious truths, or the learned profession acquired by completing specialized training in religious studies, usually at a university or school of divinity or seminary.-Definition:Augustine of Hippo...
, generally to prepare them for ordination
Ordination
In general religious use, ordination is the process by which individuals are consecrated, that is, set apart as clergy to perform various religious rites and ceremonies. The process and ceremonies of ordination itself varies by religion and denomination. One who is in preparation for, or who is...
as clergy
Clergy
Clergy is the generic term used to describe the formal religious leadership within a given religion. A clergyman, churchman or cleric is a member of the clergy, especially one who is a priest, preacher, pastor, or other religious professional....
or for other ministry
Christian ministry
In Christianity, ministry is an activity carried out by Christians to express or spread their faith. 2003's Encyclopedia of Christianity defines it as "carrying forth Christ's mission in the world", indicating that it is "conferred on each Christian in baptism." It is performed by all Christians...
. The English word is taken from the Latin seminarium, translated as seed-bed, an image taken from the Council of Trent
Council of Trent
The Council of Trent was the 16th-century Ecumenical Council of the Roman Catholic Church. It is considered to be one of the Church's most important councils. It convened in Trent between December 13, 1545, and December 4, 1563 in twenty-five sessions for three periods...
document Cum adolescentium aetas which called for the first modern seminaries. As such, in the West
Western world
The Western world, also known as the West and the Occident , is a term referring to the countries of Western Europe , the countries of the Americas, as well all countries of Northern and Central Europe, Australia and New Zealand...
the term usually refers to Roman Catholic educational institutes, but has widened to include other Christian denominations and American Jewish
American Jews
American Jews, also known as Jewish Americans, are American citizens of the Jewish faith or Jewish ethnicity. The Jewish community in the United States is composed predominantly of Ashkenazi Jews who emigrated from Central and Eastern Europe, and their U.S.-born descendants...
institutions.

In general use, a seminary can be a secular institution, or part of an institution, designated for specialized training, e.g. a graduate course. It has occasionally been used for military academies
Military academy
A military academy or service academy is an educational institution which prepares candidates for service in the officer corps of the army, the navy, air force or coast guard, which normally provides education in a service environment, the exact definition depending on the country concerned.Three...
, notably in the case of the East India Company Military Seminary
Addiscombe Military Academy
The East India Company Military Seminary, colloquially known as Addiscombe Seminary, Addiscombe College, or Addiscombe Military Academy was a British military academy at Addiscombe, Surrey, in what is now the London Borough of Croydon. It was established in 1809, and closed in 1861...
at Addiscombe, Surrey. This use is not well attested after the nineteenth century.

In some countries, the term seminary is also used for secular schools of higher education
Higher education
Higher, post-secondary, tertiary, or third level education refers to the stage of learning that occurs at universities, academies, colleges, seminaries, and institutes of technology...
that train teachers. During the 19th century in the United States
United States
The United States of America is a federal constitutional republic comprising fifty states and a federal district...
, "Seminaries educated women for the only socially acceptable occupation: teaching. Only unmarried women could be teachers. Many early women's colleges began as female seminaries and were responsible for producing an important corps of educators."