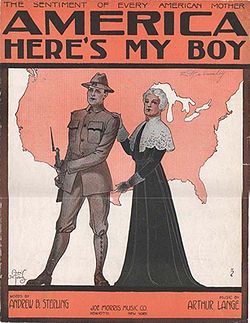 The Selective Service Act or Selective Draft Act (P.L. 65-12, 40 Stat.
United States Statutes at Large
The United States Statutes at Large, commonly referred to as the Statutes at Large and abbreviated Stat., are the official source for the laws and concurrent resolutions passed by the United States Congress...
76) was passed by the Congress of the United States on May 18, 1917. It was envisioned in December 1916 and brought to President Woodrow Wilson
Woodrow Wilson
Thomas Woodrow Wilson was the 28th President of the United States, from 1913 to 1921. A leader of the Progressive Movement, he served as President of Princeton University from 1902 to 1910, and then as the Governor of New Jersey from 1911 to 1913...
's attention shortly after the break in relations with Germany
Germany
Germany , officially the Federal Republic of Germany , is a federal parliamentary republic in Europe. The country consists of 16 states while the capital and largest city is Berlin. Germany covers an area of 357,021 km2 and has a largely temperate seasonal climate...
in February 1917. The Act itself was drafted by then-Captain (later Brigadier General) Hugh Johnson
Hugh Samuel Johnson
Hugh Samuel "Iron Pants" Johnson American Army officer, businessman, speech writer, government official and newspaper columnist. He is best known as a member of the Brain Trust of Franklin D. Roosevelt in 1932-34. He wrote numerous speeches for FDR and helped plan the New Deal...
after the United States entered World War I
World War I
World War I , which was predominantly called the World War or the Great War from its occurrence until 1939, and the First World War or World War I thereafter, was a major war centred in Europe that began on 28 July 1914 and lasted until 11 November 1918...
by declaring war on Germany. It authorized the federal government to raise a national army numbering in the hundreds of thousands with which to fight a modern war. The Act was canceled with the end of the war on November, 1918.

At the time of World War I, the U.S. Army
United States Army
The United States Army is the main branch of the United States Armed Forces responsible for land-based military operations. It is the largest and oldest established branch of the U.S. military, and is one of seven U.S. uniformed services...
was small compared with the mobilized armies of the Europe
Europe
Europe is, by convention, one of the world's seven continents. Comprising the westernmost peninsula of Eurasia, Europe is generally 'divided' from Asia to its east by the watershed divides of the Ural and Caucasus Mountains, the Ural River, the Caspian and Black Seas, and the waterways connecting...
an powers. As late as 1914, the federal army was under 100,000, while the National Guard (the organized militias of the states) numbered around 120,000. The National Defense Act of 1916
National Defense Act of 1916
The National Defense Act of 1916, , provided for an expanded army during peace and wartime, fourfold expansion of the National Guard, the creation of an Officers' and an Enlisted Reserve Corps, plus the creation of a Reserve Officers' Training Corps in colleges and universities...
authorized the growth of the army to 165,000 and the National Guard to 450,000 by 1921, but by 1917 the federal army had only expanded to around 121,000, with the National Guard numbering 181,000.

By 1916, it had become clear that any participation by the United States in the conflict in Europe would require a far larger army. While President Wilson at first wished to use only volunteers to supply the troops needed to fight, it soon became clear that this would be impossible. Indeed, three weeks after war was declared, only 97,000 had volunteered for service. Wilson accepted the recommendation by Secretary of War Newton D. Baker
Newton D. Baker
Newton Diehl Baker, Jr. was an American politician who belonged to the Democratic Party. He served as the 37th mayor of Cleveland, Ohio from 1912 to 1915 and as U.S. Secretary of War from 1916 to 1921.-Early years:...
for a draft.

General Enoch H. Crowder, the Judge Advocate General, when asked for his thoughts on the proposal, indicated his displeasure. Ironically it came to be not only that Crowder, with the assistance of Captain Hugh Johnson and others, guided the bill through Congress but also that he would administer the draft as the Provost Marshal General.

One notable problem that came up in the writing of the bill and its negotiation through Congress was the desire of former President Theodore Roosevelt
Theodore Roosevelt
Theodore "Teddy" Roosevelt was the 26th President of the United States . He is noted for his exuberant personality, range of interests and achievements, and his leadership of the Progressive Movement, as well as his "cowboy" persona and robust masculinity...
to assemble a volunteer force to go to Europe. President Wilson and others, including army officers, were reluctant to permit this for a variety of reasons. The final bill contained a compromise provision permitting the president to raise four volunteer divisions, a power Wilson did not exercise.

By the guidelines set down by the Selective Service Act, all males aged 21 to 30 were required to register for military service. At the request of the War Department, Congress amended the law in August 1918 to expand the age range to include all men 18 to 45, and to bar further volunteering. By the end of World War I, some 2 million men volunteered for various branches of the armed services, and some 2.8 million had been drafted. In fact, more than half of the almost 4.8 million Americans who served in the armed forces were drafted.

Due to the effort to incite patriotic fervor, the World War I draft had a high success rate, with fewer than 350,000 men ”dodging” the draft.
Draft dodger
Draft evasion is a term that refers to an intentional failure to comply with the military conscription policies of the nation to which he or she is subject...

The biggest difference between the draft established by the Selective Service Act of 1917 and the Civil War draft
American Civil War
The American Civil War was a civil war fought in the United States of America. In response to the election of Abraham Lincoln as President of the United States, 11 southern slave states declared their secession from the United States and formed the Confederate States of America ; the other 25...
was that a substitute could no longer be hired to fight in a man’s place. In the Civil War, men who did not desire to fight could hire a substitute. However, because it was expensive to hire someone, only very rich people could afford to do so. This resulted in a disproportionately low number of rich men fighting in the war. There was not a specific draft order for the draftee to be put into the service.

However, Section Three of the Selective Service Act of 1917 stated:

The World War I Draft

During World War I there were three registrations. http://www.archives.gov/genealogy/military/ww1/draft-registration/

Conscription was by class. The first candidates were to be drawn from Class I. Members of each class below Class I were available only if the pool of all available and potential candidates in the class above it were exhausted.