Sea ice may be contrasted with iceberg
Iceberg
An iceberg is a large piece of ice from freshwater that has broken off from a snow-formed glacier or ice shelf and is floating in open water. It may subsequently become frozen into pack ice...
s, which are chunks of ice shelves
Ice shelf
An ice shelf is a thick, floating platform of ice that forms where a glacier or ice sheet flows down to a coastline and onto the ocean surface. Ice shelves are only found in Antarctica, Greenland and Canada. The boundary between the floating ice shelf and the grounded ice that feeds it is called...
or glacier
Glacier
A glacier is a large persistent body of ice that forms where the accumulation of snow exceeds its ablation over many years, often centuries. At least 0.1 km² in area and 50 m thick, but often much larger, a glacier slowly deforms and flows due to stresses induced by its weight...
s that calve
Ice calving
Ice calving, also known as glacier calving or iceberg calving, is a form of ice ablation or ice disruption. It is the sudden release and breaking away of a mass of ice from a glacier, iceberg, ice front, ice shelf, or crevasse...
into the ocean. Icebergs are compacted snow and hence are fresh water
Fresh Water
Fresh Water is the debut album by Australian rock and blues singer Alison McCallum, released in 1972. Rare for an Australian artist at the time, it came in a gatefold sleeve...
from the beginning; sea ice loses its salt during its process of formation from sea water and thus eventually is fresh as well. 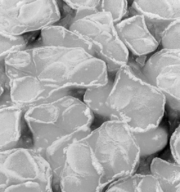 Pancake ice
Pancake ice
Pancake ice is a form of ice that consists of round pieces of ice with diameters ranging from a few inches to many feet, depending on the local conditions that affect ice formation. It may have a thickness of several inches....
is sea ice broken into small round chunks looking like pancakes.

An ice floe is a floating chunk of ice that is less than 10 kilometers (six miles) in its greatest dimension. Wider chunks of ice are called ice field
Ice field
An ice field is an area less than 50,000 km² of ice often found in the colder climates and higher altitudes of the world where there is sufficient precipitation. It is an extensive area of interconnected valley glaciers from which the higher peaks rise as nunataks...
s.

Only the top layer of water needs to cool to the freezing point. Convection of the surface layer involves the top 100 – 150 m, down to the pycnocline
Pycnocline
A pycnocline is the cline or layer where the density gradient is greatest within a body of water. An ocean current is generated by the forces such as breaking waves, terms of temperature and salinity differences, wind, Coriolis effect, and tides caused by the gravitational pull of the Moon and the...
of increased density.

In calm water, the first sea ice to form on the surface is a skim of separate crystals which initially are in the form of tiny discs, floating flat on the surface and of diameter less than 2–3 mm. Each disc has its c-axis vertical and grows outwards laterally. At a certain point such a disc shape becomes unstable, and the growing isolated crystals take on a hexagonal, stellar form, with long fragile arms stretching out over the surface. These crystals also have their c-axis vertical. The dendritic arms are very fragile, and soon break off, leaving a mixture of discs and arm fragments. With any kind of turbulence in the water, these fragments break up further into random-shaped small crystals which form a suspension of increasing density in the surface water, an ice type called frazil or grease ice
Frazil ice
Frazil ice is a collection of loose, randomly oriented needle-shaped ice crystals in water. It resembles slush and has the appearance of being slightly oily when seen on the surface of water...
. In quiet conditions the frazil crystals soon freeze together to form a continuous thin sheet of young ice; in its early stages, when it is still transparent, it is called nilas. When only a few centimeters thick this is transparent (dark nilas) but as the ice grows thicker the nilas takes on a grey and finally a white appearance. Once nilas has formed, a quite different growth process occurs, in which water molecules freeze on to the bottom of the existing ice sheet, a process called congelation growth. This growth process yields first-year ice, which in a single season may reach a thickness of 1.5–2 m.

In rough water, fresh sea ice is formed by the cooling of the ocean as heat is lost into the atmosphere. The uppermost layer of the ocean is supercooled
Supercooling
Supercooling, also known as undercooling, is the process of lowering the temperature of a liquid or a gas below its freezing point without it becoming a solid....
to slightly below the freezing point, at which time tiny ice platelets, known as frazil ice, form. As more frazil ice forms, the ice forms a mushy surface layer, known as grease ice
Grease ice
Grease ice is a very thin, soupy layer of frazil crystals clumped together, which makes the ocean surface resemble an oil slick. Grease ice is the second stage in the formation of solid sea ice after ice floes and then frazil ice....
. Frazil ice formation may also be started by snow
Snow
Snow is a form of precipitation within the Earth's atmosphere in the form of crystalline water ice, consisting of a multitude of snowflakes that fall from clouds. Since snow is composed of small ice particles, it is a granular material. It has an open and therefore soft structure, unless packed by...
fall, rather than supercooling.

Slush
Slush
Slush can mean any of the following:* Slush — a slurry mixture of liquid and solid forms of water.* Slush — a pejorative and slang combination of the likewise derogatory terms slut and lush...
is a floating mass formed initially from snow
Snow
Snow is a form of precipitation within the Earth's atmosphere in the form of crystalline water ice, consisting of a multitude of snowflakes that fall from clouds. Since snow is composed of small ice particles, it is a granular material. It has an open and therefore soft structure, unless packed by...
and water. Shuga is formed in agitated conditions by accumulation of slush or grease ice into spongy pieces several inches in size.

Waves and wind then act to compress these ice particles into larger plates, of several meters in diameter, called pancake ice
Pancake ice
Pancake ice is a form of ice that consists of round pieces of ice with diameters ranging from a few inches to many feet, depending on the local conditions that affect ice formation. It may have a thickness of several inches....
. These float on the ocean surface, and collide with one another, forming upturned edges. In time, the pancake ice plates may themselves be rafted over one another or frozen together into a more solid ice cover, known as consolidated ice pancake ice. Such ice has a very rough appearance on top and bottom.

Sea ice is largely fresh, since a lot of the ocean salt is expelled during ice formation. The resulting ice is riddled with minute brine-filled channels and consequently is still salty (about 1% salt, compared with about 3.5% salt in the ocean). The expelled brine has an important bearing on the ocean circulation.

If sufficient snow falls on sea ice to depress the freeboard below sea level, sea water will flow in and a layer of ice will form of mixed snow/sea water. This is particularly common around Antarctica.

Russia
Russia
Russia or , officially known as both Russia and the Russian Federation , is a country in northern Eurasia. It is a federal semi-presidential republic, comprising 83 federal subjects...
n scientist Vladimir Vize
Vladimir Wiese
Professor Vladimir Yulyevich Vize , was a Russian scientist of German descent who devoted his life to the study of the Arctic ice pack...
(1886–1954) devoted his life to study the Arctic ice pack and developed the Scientific Prediction of Ice Conditions Theory, for which he was widely acclaimed in academic circles. He applied this theory in the field in the Kara Sea
Kara Sea
The Kara Sea is part of the Arctic Ocean north of Siberia. It is separated from the Barents Sea to the west by the Kara Strait and Novaya Zemlya, and the Laptev Sea to the east by the Severnaya Zemlya....
, which led to the discovery of Vize Island
Vize Island
Vize Island or Wiese Island is an isolated island located in the Arctic Ocean at the northern end of the Kara Sea, roughly midway between Franz Josef Land and Severnaya Zemlya, its latitude is 79° 30' N and its longitude 76° 54' E...
.

Sea ice freezes and melts due to a combination of factors, including the age of the ice, air temperatures, and solar insolation. During the winter the area of the Arctic Ocean covered by sea ice increases, usually reaching a maximum extent during the month of March. The area covered in sea ice then decreases, reaching its minimum extent in September most years. First-year ice melts more easily than older ice for two reasons: 1) First-year ice is thinner than older ice, since the process of congelation growth has had less time to operate; and 2) first-year ice is less permeable than older ice, so summer meltwater tends to form deeper ponds on the first-year ice surface than on older ice, and deeper ponds mean lower albedo
Albedo
Albedo , or reflection coefficient, is the diffuse reflectivity or reflecting power of a surface. It is defined as the ratio of reflected radiation from the surface to incident radiation upon it...
and thus greater solar energy capture.

Satellite data has allowed the tracking of sea ice extents since 1978. During the warmest years, like the winter of 2005-2006, sea ice is observed to reach a winter maximum extent that is smaller than in the years before or after. The summer minimum Arctic ice extent for 2010 was the third lowest over the period of satellite observations of the polar ice. The minimum record summer Arctic sea ice extent was in 2007.

Sea ice is part of the Earth's biosphere
Biosphere
The biosphere is the global sum of all ecosystems. It can also be called the zone of life on Earth, a closed and self-regulating system...
. When sea water freezes, the ice is riddled with brine-filled channels which sustain sympagic organisms such as bacteria, algae, copepods and annelids, which in turn provide food for animals such as krill and specialised fish like the Bald notothen
Bald notothen
The bald notothen is a cryopelagic fish of the Southern Ocean. Antifreeze proteins in its blood prevent it freezing in the sub-zero water temperatures of Antarctica...
, fed upon in turn by larger animals such as Emperor penguins and Minke whales.

The decline of seasonal sea ice is putting the survival of Arctic species such as ringed seal
Ringed Seal
The ringed seal , also known as the jar seal and as netsik or nattiq by the Inuit, is an earless seal inhabiting the Arctic and sub-Arctic regions...
s and polar bear
Polar Bear
The polar bear is a bear native largely within the Arctic Circle encompassing the Arctic Ocean, its surrounding seas and surrounding land masses. It is the world's largest land carnivore and also the largest bear, together with the omnivorous Kodiak Bear, which is approximately the same size...
s at risk.