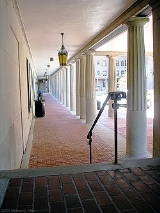 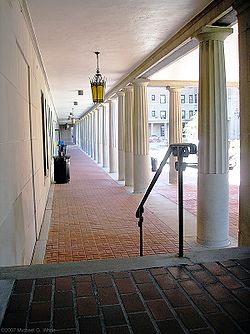 Schenley Quadrangle is a cluster of University of Pittsburgh
University of Pittsburgh
The University of Pittsburgh, commonly referred to as Pitt, is a state-related research university located in Pittsburgh, Pennsylvania, United States. Founded as Pittsburgh Academy in 1787 on what was then the American frontier, Pitt is one of the oldest continuously chartered institutions of...
residence halls that is a Pittsburgh History and Landmarks Foundation
Pittsburgh History and Landmarks Foundation
The Pittsburgh History & Landmarks Foundation is a nonprofit organization founded in 1964 to support the preservation of historic buildings and neighborhoods in Pittsburgh, Pennsylvania, USA....
Historic Landmark and are contributing properties
Contributing property
In the law regulating historic districts in the United States, a contributing resource or contributing property is any building, structure, or object which adds to the historical integrity or architectural qualities that make the historic district, listed locally or federally, significant...
to the Schenley Farms National Historic District
Historic district (United States)
In the United States, a historic district is a group of buildings, properties, or sites that have been designated by one of several entities on different levels as historically or architecturally significant. Buildings, structures, objects and sites within a historic district are normally divided...
https://www.dot7.state.pa.us/ce_imagery/phmc_scans/H050656_01H.pdfhttp://mac10.umc.pitt.edu/u/FMPro?-db=ustory&-format=d.html&-lay=a&-sortfield=issueid%3a%3aissuedate&-sortorder=descend&keywords=bellefield%20hall&-max=50&-recid=38544&-find= in Pittsburgh
Pittsburgh, Pennsylvania
Pittsburgh is the second-largest city in the US Commonwealth of Pennsylvania and the county seat of Allegheny County. Regionally, it anchors the largest urban area of Appalachia and the Ohio River Valley, and nationally, it is the 22nd-largest urban area in the United States...
, Pennsylvania
Pennsylvania
The Commonwealth of Pennsylvania is a U.S. state that is located in the Northeastern and Mid-Atlantic regions of the United States. The state borders Delaware and Maryland to the south, West Virginia to the southwest, Ohio to the west, New York and Ontario, Canada, to the north, and New Jersey to...
, United States
United States
The United States of America is a federal constitutional republic comprising fifty states and a federal district...
.

The five residence halls are the former historic Schenley Apartments, designed by Henry Hornbostel
Henry Hornbostel
Henry Hornbostel was an American architect.He designed more than 225 buildings, bridges, and monuments in the United States; currently 22 are listed on the National Register of Historic Places....
http://ryan.library.cmu.edu/fmi/xsl/AA/browserecord.xsl?-lay=Layout+%231&-recid=5705&-find=-findl, with collaboration from Rutan & Russell and Eric Fisher Wood, for developer Franklin Nicola
Franklin Nicola
Franklin F. Nicola was an American real estate developer.In the early 20th century he promoted and developed a civic center plan for the Oakland district of Pittsburgh, Pennsylvania—miles away from the city's smokey, congested downtown—as a new center for culture, art, and education....
and were built between 1922 and 1924 at a cost of more than $4.5 million ($ in dollars). Originally, the Schenley Apartments were home of Pittsburgh's well-to-do, including for a time its architect Henry Hornbostel, and consisted of 1,113 rooms in 238 apartments throughout the five buildings. The University acquired them in December 1955 at a cost of $3 million ($ in dollars), and renovated them into residence halls for another $1 million $ in dollars). By 1957-1958 101 female students had moved into 20 apartments in Building F (now called Brackenridge Hall).http://digital.library.pitt.edu/cgi-bin/t/text/pageviewer-idx?c=pittmiscpubs;cc=pittmiscpubs;g=documentingpitt;xc=1;xg=1;q1=Schenley%20Apartments;rgn=full%20text;idno=00c50130m;didno=00c50130m;view=image;seq=0283http://digital.library.pitt.edu/cgi-bin/t/text/pageviewer-idx?c=pittyearbooks;cc=pittyearbooks;g=documentingpitt;xc=1;xg=1;q1=Schenley%20Apartments;rgn=full%20text;idno=1958e49702;didno=1958e49702;view=image;seq=0037

Amos Hall houses nine sororities, each floor houses a separate sorority. There are 152 upperclass women residents living in sorority suites which feature a kitchen, bathrooms, living room, and chapter room. Laundry facilities are in the penthouse. Amos Hall also features a fitness center that is available to all residents of Schenley Quadrangle. In November 2008, Pitt approved a $9.1 million renovation of Amos Hall which included air conditioning, updated energy-efficient electrical and water systems, and new bedrooms, bathrooms, and kitchens that were redesigned to be compatible with the pre-existing architectural structure. Completed and reopened for the 2009 fall term, the input of each sorority gave every floor its own style.

A PNC Bank
PNC Financial Services
PNC Financial Services Group, Inc. is a U.S.-based financial services corporation, with assets of approximately $264.3 billion...
branch on the street level of the building offers student banking services and an 24-hour ATM
Automated teller machine
An automated teller machine or automatic teller machine, also known as a Cashpoint , cash machine or sometimes a hole in the wall in British English, is a computerised telecommunications device that provides the clients of a financial institution with access to financial transactions in a public...
.

The building is named for the University's dean of women from 1919 to 1941, Thrysa W. Amos.http://digital.library.pitt.edu/cgi-bin/t/text/pageviewer-idx?c=pittmiscpubs;cc=pittmiscpubs;g=documentingpitt;xc=1;xg=1;q1=Amos;rgn=full%20text;idno=00c50130m;didno=00c50130m;view=image;seq=0202http://digital.library.pitt.edu/cgi-bin/t/text/pageviewer-idx?c=pittmiscpubs;cc=pittmiscpubs;g=documentingpitt;xc=1;xg=1;q1=Amos;rgn=full%20text;idno=00afj8718m;didno=00afj8718m;view=image;seq=0599

Brackenridge Hall houses 210 mostly upperclass men and women in four- and five-person suites. Each suite features a MicroFridge and a private bathroom. There are also a few single and double rooms that do not include a MicroFridge. Laundry facilities are located in the penthouse.

The Pitt Shop, a University owned store selling University of Pittsburgh branded clothing and merchandise, is on the street level of the building.

Bruce Hall houses 212 men and women, primarily upperclass students, in four- and six-person suites. The building is named for the first chancellor after the University was renamed from the Pittsburgh Academy to the Western University of Pennsylvania, Robert Bruce
Robert Bruce (Pitt Chancellor)
Reverend Doctor Robert Bruce is often regarded as the first chancellor of the University of Pittsburgh, then called the Western University of Pennsylvania, serving from 1819 to 1835 and again from 1836 to 1843, although for his first term he had the title "Principal" and for his second term the...
. Bruce Hall served as a university office building until those offices were moved into Posvar Hall thereby allowing Bruce Hall to be converted into housing suites beginning in 1978.

Basement and First Floor
The basement and first floor of Bruce Hall are actually on the street level with Forbes Avenue
Forbes Avenue
Forbes Avenue is one of the longest streets in Pittsburgh, Pennsylvania, United States. It has a length of about ten miles and is named for General John Forbes , whose expedition recaptured Fort Duquesne and who renamed the place Pittsburgh in 1758.The westernmost terminus of Forbes Avenue lies at...
, and are rented out to The UPS Store
The UPS Store
The UPS Store is a subsidiary of UPS, with locations in the United States and Canada. Each store offers shipping, postal, online printing, and other business services. In the United States, each store is independently owned and operated by a licensed franchisee of Mail Boxes Etc., Inc...
and 7 Eleven.

Second Floor
The second floor is the main entrance for residents, as well as the location of the University of Pittsburgh Residence Life offices.

Fourth through Eleventh Floors
The fourth through eleventh floors are entirely student suites. Each floor has 6 suites, 5 4-person suites and 1 six-person suite with laundry facilities on each floor. The 6-person suites on the upper floors have an exceptional view of the Cathedral of Learning
Cathedral of Learning
The Cathedral of Learning, a Pittsburgh landmark listed in the National Register of Historic Places, is the centerpiece of the University of Pittsburgh's main campus in the Oakland neighborhood of Pittsburgh, Pennsylvania, United States...
, Schenley Plaza
Schenley Plaza
Schenley Plaza is a public park serving as the grand entrance into Schenley Park in Pittsburgh, Pennsylvania.The plaza, located on Forbes Avenue and Schenley Drive in the city's Oakland district, includes multiple gardens, food kiosks, public meeting spaces, a carousel, and a prominent "Emerald...
, and the Carnegie Museum of Natural History
Carnegie Museums of Pittsburgh
Carnegie Museums of Pittsburgh are four museums that are operated by the Carnegie Institute headquartered in the Oakland neighborhood of Pittsburgh, Pennsylvania...
out of the common room's windows.

A five bedroom, four-bath suite on the twelfth floor of Bruce Hall also once served as the University's chancellor residence.http://digital.library.pitt.edu/cgi-bin/t/text/pageviewer-idx?c=pittmiscpubs&cc=pittmiscpubs&xc=1&idno=00c50130m&g=documentingpitt&xg=1&q1=Schenley+Apartments&frm=frameset&view=image&seq=279

The Ghost of 1201 Bruce Hall
Many students and university employees, as well as various outside sources, believe that a ghost
Ghost
In traditional belief and fiction, a ghost is the soul or spirit of a deceased person or animal that can appear, in visible form or other manifestation, to the living. Descriptions of the apparition of ghosts vary widely from an invisible presence to translucent or barely visible wispy shapes, to...
or two haunts the 1201 suite of Bruce. The owner of the Schenley Apartments once lived with his family on the twelfth floor. Rumor has it that his mistress and/or wife committed suicide in the 1201 by either hanging herself or throwing herself out the window.
Students and staff have reported hearing footsteps in the stairwells and the halls, as well as a woman's voice, while some have reported poltergiest-like activity. Others have heard stories of the elevators not stopping on their floor, and continuing up to the twelfth floor and refusing to go back down. Traditionally referred to as "Harriet," the ghost, for which Pitt staff have even hung Christmas stocking
Christmas stocking
A Christmas stocking is an empty sock or sock-shaped bag that children hang on Christmas Eve so that Santa Claus can fill it with small toys, candy, fruit, coins or other small gifts when he arrives. These small items are often referred to as stocking stuffers or stocking fillers...
s for, has only been known to visit the 12th floor, the 11th floor, and suite 8A on the 8th floor, where she is said to have lived.

Holland Hall is divided into two wings, North and South, and houses 600 upperclass and first-year women in single, double, triple, and quad accommodations. There is a kitchenette
Kitchenette
A kitchenette is a small cooking area.In motel and hotel rooms, small apartments, college dormitories, or office buildings a kitchenette usually consists of a small refrigerator, a microwave oven or hotplate, and, less frequently, a sink...
on each floor as well as communal bathrooms and showers. The penthouse features a lounge, study area, and laundry facilities. It originally served as a men's dormatory.

Since January, 1960, The University Book Center has been located on the ground floor of Holland Hall, accessible from either the Schenley Quadrangle or from Fifth Avenue. At the time of its opening, it was hailed as the largest college bookstore in the nation.

When still the Schenley Apartments, the buildings were simply named "A", "B", "C", "D", and "F". After their acquisition by the university for student residences, they were eventually renamed for important figures in the university's history.