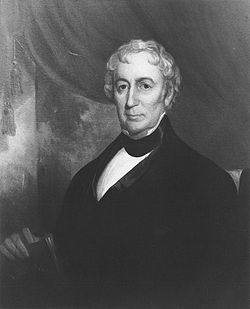 Bruce was born in the parish of Scone
Scone, Scotland
Scone is a village in Perth and Kinross, Scotland. The medieval village of Scone, which grew up around the monastery and royal residence, was abandoned in the early 19th century when the residents were removed and a new palace was built on the site by the Earl of Mansfield...
, Perthshire
Perthshire
Perthshire, officially the County of Perth , is a registration county in central Scotland. It extends from Strathmore in the east, to the Pass of Drumochter in the north, Rannoch Moor and Ben Lui in the west, and Aberfoyle in the south...
, Scotland
Scotland
Scotland is a country that is part of the United Kingdom. Occupying the northern third of the island of Great Britain, it shares a border with England to the south and is bounded by the North Sea to the east, the Atlantic Ocean to the north and west, and the North Channel and Irish Sea to the...
, February 20, 1778, was a graduate of the University of Edinburgh
University of Edinburgh
The University of Edinburgh, founded in 1583, is a public research university located in Edinburgh, the capital of Scotland, and a UNESCO World Heritage Site. The university is deeply embedded in the fabric of the city, with many of the buildings in the historic Old Town belonging to the university...
. Bruce was pastor of the First Associate (United) Presbyterian Church
Presbyterian Church (USA)
The Presbyterian Church , or PC, is a mainline Protestant Christian denomination in the United States. Part of the Reformed tradition, it is the largest Presbyterian denomination in the U.S...
of Pittsburgh from 1808 to his death in 1846, and was a professor of natural history, chemistry, and mathematics at the Western University of Pennsylvania from 1820 to 1843.

Thomas Mellon
Thomas Mellon
Thomas Alexander Mellon was a Scotch-Irish American, entrepreneur, lawyer, and judge, best known as the founder of Mellon Bank and patriarch of the Mellon family of Pittsburgh, Pennsylvania.-Early life:...
, founder of Mellon Financial Corporation and student at the University under Bruce, described him in his autobiography in the following way:

In Latin and Greek, mathematics and . . . philosophy, Doctor Bruce, the president of the college, heard our recitations. He was one of a class of men rarely met with: modest and retiring of manner, shunning notoriety, and averse to anything that had the appearance of ostentation. He was highly cultured in general literature, an extensive reader, liberal minded, and a most accurate scholar in the several branches he professed. He had all the philosophy of Bacon and Descartes, Hume, Reid, and Dugald Stewart at command - he had himself been a student of Dugald Stewart. . . .

The sentiments of Dr. Bruce's valedictory to our class in September, 1837, have influenced my life and still abide in my memory.

. . . He had the learning of a great scholar and the ability of an apt teacher; and what was no less important to his position, his dignity of manner and kindness of heart secured the love and respect of the students.

Bruce's tenure in leading the university was noted for his decision to allow the admission of the first Black student in 1829. Bruce was known to be one of the leading abolitionists in the Pittsburgh region.

Bruce withdrew from the University in 1843 because of perceived criticism by reform-minded trustees. He then rented some rooms and set up a school, College Duquesne, and a number of Western University students who were members of the Tilghman Literary Society followed him. Before his death, the misunderstanding with the University was cleared up and the charter of College Duquesne was allowed to lapse by 1849. Meanwhile, the Western University of Pennsylvania graduated its own students and, almost thirty years later, the seceding students were officially recognized as University alumni and nineteen survivors were awarded honorary master of arts degrees.
http://digital.library.pitt.edu/cgi-bin/t/text/pageviewer-idx?c=pittmiscpubs;cc=pittmiscpubs;g=documentingpitt;xc=1;xg=1;q1=robert%20bruce;rgn=full%20text;idno=00afj8718m;didno=00afj8718m;view=image;seq=5;page=root;size=s;frm=frameset;
http://digital.library.pitt.edu/cgi-bin/t/text/pageviewer-idx?c=pittmiscpubs;cc=pittmiscpubs;g=documentingpitt;xc=1;xg=1;q1=robert%20bruce;rgn=full%20text;idno=00c50130m;didno=00c50130m;view=image;seq=0032
The source of this article is wikipedia, the free encyclopedia.  The text of this article is licensed under the GFDL.