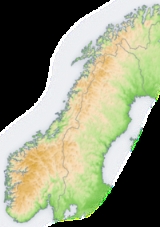 Encyclopedia
The Scandinavian Mountains or the Scandes, in Swedish
Swedish language
Swedish is a North Germanic language, spoken by approximately 10 million people, predominantly in Sweden and parts of Finland, especially along its coast and on the Åland islands. It is largely mutually intelligible with Norwegian and Danish...
Skanderna, Fjällen ("the Fell
Fell
“Fell” is a word used to refer to mountains, or certain types of mountainous landscape, in Scandinavia, the Isle of Man, and parts of northern England.- Etymology :...
s") or Kölen (Fjällen being by far the most frequent name and virtually the only one in modern colloquial speech), in Finnish
Finnish language
Finnish is the language spoken by the majority of the population in Finland Primarily for use by restaurant menus and by ethnic Finns outside Finland. It is one of the two official languages of Finland and an official minority language in Sweden. In Sweden, both standard Finnish and Meänkieli, a...
Köli and in Norwegian
Norwegian language
Norwegian is a North Germanic language spoken primarily in Norway, where it is the official language. Together with Swedish and Danish, Norwegian forms a continuum of more or less mutually intelligible local and regional variants .These Scandinavian languages together with the Faroese language...
Kjølen, with the three latter meaning The Keel, are a mountain range
Mountain range
A mountain range is a single, large mass consisting of a succession of mountains or narrowly spaced mountain ridges, with or without peaks, closely related in position, direction, formation, and age; a component part of a mountain system or of a mountain chain...
that runs through the Scandinavian Peninsula
Scandinavian Peninsula
The Scandinavian Peninsula is a peninsula in Northern Europe, which today covers Norway, Sweden, and most of northern Finland. Prior to the 17th and 18th centuries, large parts of the southern peninsula—including the core region of Scania from which the peninsula takes its name—were part of...
. The Scandinavian Mountains are equivalent with the Scandinavian Caledonides. The western sides of the mountains drop precipitously into the North Sea
North Sea
In the southwest, beyond the Straits of Dover, the North Sea becomes the English Channel connecting to the Atlantic Ocean. In the east, it connects to the Baltic Sea via the Skagerrak and Kattegat, narrow straits that separate Denmark from Norway and Sweden respectively...
and Norwegian Sea
Norwegian Sea
The Norwegian Sea is a marginal sea in the North Atlantic Ocean, northwest of Norway. It is located between the North Sea and the Greenland Sea and adjoins the North Atlantic Ocean to the west and the Barents Sea to the northeast. In the southwest, it is separated from the Atlantic Ocean by a...
, forming the famous fjords of Norway, while to the northeast they gradually curve towards Finland
Finland
Finland , officially the Republic of Finland, is a Nordic country situated in the Fennoscandian region of Northern Europe. It is bordered by Sweden in the west, Norway in the north and Russia in the east, while Estonia lies to its south across the Gulf of Finland.Around 5.4 million people reside...
. To the north they form the border between Norway and Sweden, still reaching 2000 m (6,561.7 ft) at the Arctic circle
Arctic Circle
The Arctic Circle is one of the five major circles of latitude that mark maps of the Earth. For Epoch 2011, it is the parallel of latitude that runs north of the Equator....
. The mountain range just touches northwesternmost Finland, but are scarcely more than hills at their northernmost extension at the North Cape
North Cape, Norway
North Cape is a cape on the island of Magerøya in Northern Norway, in the municipality of Nordkapp. Its 307 m high, steep cliff is often referred to as the northernmost point of Europe, located at , 2102.3 km from the North Pole. However, the neighbouring point Knivskjellodden is actually...
.

The mountains are not very tall, but are at places very steep; Galdhøpiggen
Galdhøpiggen
Galdhøpiggen is the highest mountain in Norway, Scandinavia and Northern Europe, at 2,469 m above sea level...
in southern Norway is the highest peak, at 2469 metres (8,100 ft), Kebnekaise
Kebnekaise
Kebnekaise is the highest mountain in Sweden and Sápmi. The Kebnekaise massif, which is part of the Scandinavian Mountains, has two peaks, of which the southern, glaciated one is highest at above sea level at the latest time of measurement. The north top is free of ice...
has the highest peak on the Swedish side, at 2104 m (6,903 ft), while Halti
Halti
Halti is the highest fell in Finland, at above sea level, and thus the highest point in the country. The Halti fell is located in the municipality of Enontekiö in the province of Lapland at the border between Finland and Norway. The summit of Halti at is actually in Norway and it is known as...
is the tallest in Finland, at 1328 m (4,357 ft).
The combination of a northerly location and moisture from the North Atlantic ocean has caused the formation of many icefields and glacier
Glacier
A glacier is a large persistent body of ice that forms where the accumulation of snow exceeds its ablation over many years, often centuries. At least 0.1 km² in area and 50 m thick, but often much larger, a glacier slowly deforms and flows due to stresses induced by its weight...
s.

The Scandinavian mountain system is geologically
Geology
Geology is the science comprising the study of solid Earth, the rocks of which it is composed, and the processes by which it evolves. Geology gives insight into the history of the Earth, as it provides the primary evidence for plate tectonics, the evolutionary history of life, and past climates...
connected with the mountains of Scotland
Geography of Scotland
The geography of Scotland is highly varied, from rural lowlands to barren uplands, and from large cities to uninhabited islands. Located in north-west Europe, Scotland comprises the northern one third of the island of Great Britain...
, Ireland
Geography of Ireland
Ireland is an island in northwest Europe in the north Atlantic Ocean whose main geographical features include low central plains surrounded by a ring of coastal mountains. The highest peak is Carrauntoohil , which is above sea level. The western coastline is rugged, with many islands, peninsulas,...
and, crossing the Atlantic Ocean, the Appalachian Mountains
Appalachian Mountains
The Appalachian Mountains #Whether the stressed vowel is or ,#Whether the "ch" is pronounced as a fricative or an affricate , and#Whether the final vowel is the monophthong or the diphthong .), often called the Appalachians, are a system of mountains in eastern North America. The Appalachians...
of North America
North America
North America is a continent wholly within the Northern Hemisphere and almost wholly within the Western Hemisphere. It is also considered a northern subcontinent of the Americas...
. Geologists hold that all these formed a single range prior to the breakup of the ancient supercontinent
Supercontinent
In geology, a supercontinent is a landmass comprising more than one continental core, or craton. The assembly of cratons and accreted terranes that form Eurasia qualifies as a supercontinent today.-History:...
Pangaea
Pangaea
Pangaea, Pangæa, or Pangea is hypothesized as a supercontinent that existed during the Paleozoic and Mesozoic eras about 250 million years ago, before the component continents were separated into their current configuration....
. The current mountains are remnants of the Caledonian mountains
Caledonian orogeny
The Caledonian orogeny is a mountain building era recorded in the northern parts of the British Isles, the Scandinavian Mountains, Svalbard, eastern Greenland and parts of north-central Europe. The Caledonian orogeny encompasses events that occurred from the Ordovician to Early Devonian, roughly...
. The mountains have been eroded
Erosion
Erosion is when materials are removed from the surface and changed into something else. It only works by hydraulic actions and transport of solids in the natural environment, and leads to the deposition of these materials elsewhere...
to one-fifth of their original height. The mountains are one of the oldest still extant mountain ranges in the world.


The highest mountains in Norway

Of the 10 tallest mountain peaks in Scandinavia
Scandinavia
Scandinavia is a cultural, historical and ethno-linguistic region in northern Europe that includes the three kingdoms of Denmark, Norway and Sweden, characterized by their common ethno-cultural heritage and language. Modern Norway and Sweden proper are situated on the Scandinavian Peninsula,...
(prominence greater than 30 m or 98.4 ft), 6 are situated in Oppland
Oppland
is a county in Norway, bordering Sør-Trøndelag, Møre og Romsdal, Sogn og Fjordane, Buskerud, Akershus, Oslo and Hedmark. The county administration is in Lillehammer. Oppland is, together with Hedmark, one of the only two landlocked counties of Norway....
, Norway. The other 4 are situated in Sogn og Fjordane
Sogn og Fjordane
is a county in Norway, bordering Møre og Romsdal, Oppland, Buskerud, and Hordaland. The county administration is in the town of Hermansverk in Leikanger municipality while the largest town is Førde....
, Norway. There are 83 peaks equal to or taller than 2,200 m (7,218 ft) in Norway.

The highest mountains in Sweden

There are 12 peaks in Sweden
Sweden
Sweden , officially the Kingdom of Sweden , is a Nordic country on the Scandinavian Peninsula in Northern Europe. Sweden borders with Norway and Finland and is connected to Denmark by a bridge-tunnel across the Öresund....
that reach above 2000 m (6,561.7 ft), or 13 depending on how you define a peak. This list is defined according to UIAA. Eight of them are located in Sarek National Park
Sarek National Park
Sarek National Park is a national park in Jokkmokk Municipality, in the province Lapland in northern Sweden. Sarek borders the national parks Stora Sjöfallet and Padjelanta...
and the neighbouring national park Stora Sjöfallet
Stora Sjöfallet
Stora Sjöfallet is a national park in Norrbotten County in northern Sweden, in Gällivare Municipality. It is situated by the Norwegian border. It was declared a national park in 1909. The national park is part of the Laponian area which is a UNESCO World Heritage Site...
. The other four peaks are located in the further north region of Kebnekaise
Kebnekaise
Kebnekaise is the highest mountain in Sweden and Sápmi. The Kebnekaise massif, which is part of the Scandinavian Mountains, has two peaks, of which the southern, glaciated one is highest at above sea level at the latest time of measurement. The north top is free of ice...
. All mountain names are in Sami
Sami languages
Sami or Saami is a general name for a group of Uralic languages spoken by the Sami people in parts of northern Finland, Norway, Sweden and extreme northwestern Russia, in Northern Europe. Sami is frequently and erroneously believed to be a single language. Several names are used for the Sami...
but with the more common Swedish spelling of it.


Other popular mountains for skiers, climbers and hikers in Sweden

The highest mountains in Finland