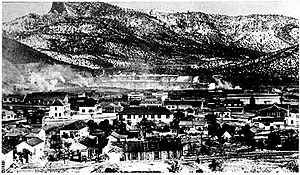 Santa Rita is a ghost town
Ghost town
A ghost town is an abandoned town or city. A town often becomes a ghost town because the economic activity that supported it has failed, or due to natural or human-caused disasters such as floods, government actions, uncontrolled lawlessness, war, or nuclear disasters...
in Grant County
Grant County, New Mexico
-2010:Whereas according to the 2010 U.S. Census Bureau:*84.9% White*0.9% Black*1.4% Native American*0.4% Asian*0.1% Native Hawaiian or Pacific Islander*2.8% Two or more races*9.8% Other races*48.3% Hispanic or Latino -2000:...
in the U.S. state
U.S. state
A U.S. state is any one of the 50 federated states of the United States of America that share sovereignty with the federal government. Because of this shared sovereignty, an American is a citizen both of the federal entity and of his or her state of domicile. Four states use the official title of...
of New Mexico
New Mexico
New Mexico is a state located in the southwest and western regions of the United States. New Mexico is also usually considered one of the Mountain States. With a population density of 16 per square mile, New Mexico is the sixth-most sparsely inhabited U.S...
. The site of El Chino copper mine
El Chino Mine
The Chino Mine , also known as the Santa Rita mine, is an open-pit copper mine located in the town of Santa Rita, New Mexico east of Silver City. The mine was started as the Chino Copper Company in 1909 by mining engineer John M. Sully, and is currently owned and operated by Freeport-McMoRan...
, Santa Rita was located fifteen miles east of Silver City
Silver City, New Mexico
Silver City is a town in Grant County, New Mexico, in the United States. As of the 2000 census, the town population was 10,545. It is the county seat of Grant County. The city is the home of Western New Mexico University.-History:...
.

Copper mining in the area began late in the Spanish colonial period, but it was not until 1803 that Franscisco Manuel Elguea, a Chihuahua banker and businessman, founded the town of Santa Rita. He named it Santa Rita del Cobre (Saint Rita of the Copper), after Saint Margarita of Cascia
Rita of Cascia
Saint Rita of Cascia is an Italian Augustinian saint.-Early life:St. Rita was born at Roccaporena near Spoleto, Umbria, Italy....
and the existing mine. During the early 19th century the mine produced over 6 million pounds of copper annually. The crudely smeltered ore was shipped to Chihuahua for further smelting and then sent to Mexico City on mule back. The area was relatively peaceful despite an occasional attack from the Warm Springs (Mimbres) band of the Chiricahua
Chiricahua
Chiricahua are a group of Apache Native Americans who live in the Southwest United States. At the time of European encounter, they were living in 15 million acres of territory in southwestern New Mexico and southeastern Arizona in the United States, and in northern Sonora and Chihuahua in Mexico...
Apache
Apache
Apache is the collective term for several culturally related groups of Native Americans in the United States originally from the Southwest United States. These indigenous peoples of North America speak a Southern Athabaskan language, which is related linguistically to the languages of Athabaskan...
who lived nearby at the headwaters of the Gila
Gila River
The Gila River is a tributary of the Colorado River, 650 miles long, in the southwestern states of New Mexico and Arizona.-Description:...
and Mimbres
Mimbres River
The Mimbres River is a river in southwestern New Mexico. It forms from snow pack and runoff on the south-western slopes of the Black Range and flows into a small endorheic basin east of Deming, New Mexico. The uplands watershed are administered by the US Forest Service, while the land in the...
rivers. In 1837, however, an American trader named James Johnson lured the Apaches to a gathering and then massacred them to sell their scalps for the bounty offer by the Mexican government. This caused open warfare and almost all of the nearly 500 inhabitants of Santa Rita were killed in an attack on the town; only six managed to reach safety in Chihuahua. The town was abandoned until 1849, when the U.S.Army established a command post on the site, calling it Cantonment Dawson.

Martin B. Hayes reopened the mine in 1873 after Cochise
Cochise
Cochise was a chief of the Chokonen band of the Chiricahua Apache and the leader of an uprising that began in 1861. Cochise County, Arizona is named after him.-Biography:...
signed a treaty of peace; however, the town continued to be subject to Apache attacks from Geronimo
Geronimo
Geronimo was a prominent Native American leader of the Chiricahua Apache who fought against Mexico and the United States for their expansion into Apache tribal lands for several decades during the Apache Wars. Allegedly, "Geronimo" was the name given to him during a Mexican incident...
, Victorio
Victorio
Victorio was a warrior and chief of the Chihenne band of the Chiricahua Apaches in what is now the American states of New Mexico, Arizona, Texas and the Mexican states of Sonora and Chihuahua....
and other Apache warleaders until 1886, when Geronimo surrendered for the last time. A post office opened in 1881 and the coming of the railroad five years later spurred further development of the mine.

After the Santa Rita mine was converted to an open pit in 1901, the town was forced to move several times as the pit grew. Shortly after the town relocated in 1957, heavy rains washed boulders and mud into the new townsite. The town was abandoned once and for all in 1967, and the school system for the area was discontinued in 1972.