Santa Cruz is located on the right bank of the Pasig River
Pasig River
The Pasig River is a river in the Philippines that connects Laguna de Bay to Manila Bay. Stretching for , it is lined by Metro Manila on each side...
, on the northern portion of the City of Manila, near the mouth of the river, in between the districts of Tondo
Tondo, Manila
Tondo is a district of Manila, Philippines. The locale has existed prior to the arrival of the Spanish, referred to as "Tundun" in the Laguna Copperplate Inscription. One of the most densely populated areas of land in the world, Tondo is located in the northwest portion of the city and is primarily...
and Quiapo
Quiapo, Manila
Quiapo is a district and city square of Manila. Referred as the "Old Downtown", Quiapo in known for where cheap buys or goods are being sold at rock-bottom prices and was the home of the Quiapo Church, where the feast for the Black Nazarene is held, with over millions of people attending...
. The district belongs to the 3rd congressional district of Manila in the Philippines
Philippines
The Philippines , officially known as the Republic of the Philippines , is a country in Southeast Asia in the western Pacific Ocean. To its north across the Luzon Strait lies Taiwan. West across the South China Sea sits Vietnam...
.

Prior to the arrival of the Spanish conquistadors to the Philippine Islands, the district of Santa Cruz was partly a marshland, patches of greeneries, orchards and partly rice fields. A Spanish expedition in 1581 claimed the territory and awarded to the Society of Jesus
Society of Jesus
The Society of Jesus is a Catholic male religious order that follows the teachings of the Catholic Church. The members are called Jesuits, and are also known colloquially as "God's Army" and as "The Company," these being references to founder Ignatius of Loyola's military background and a...
or more commonly called the Jesuits. 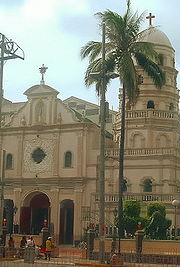 The Jesuits built the first Roman Catholic Church
Roman Catholic Church
The Catholic Church, also known as the Roman Catholic Church, is the world's largest Christian church, with over a billion members. Led by the Pope, it defines its mission as spreading the gospel of Jesus Christ, administering the sacraments and exercising charity...
in the area where the present Santa Cruz Parish stands on June 20, 1619. The Jesuits enshrined the image of the Our Lady of Pilar in 1643 to serve the pre-dominantly Chinese
Han Chinese
Han Chinese are an ethnic group native to China and are the largest single ethnic group in the world.Han Chinese constitute about 92% of the population of the People's Republic of China , 98% of the population of the Republic of China , 78% of the population of Singapore, and about 20% of the...
residents in the area. The image drew a lot of devotees and a popular cult
Cult
The word cult in current popular usage usually refers to a group whose beliefs or practices are considered abnormal or bizarre. The word originally denoted a system of ritual practices...
grew around it.

On June 24, 1784, the King of Spain
Spain
Spain , officially the Kingdom of Spain languages]] under the European Charter for Regional or Minority Languages. In each of these, Spain's official name is as follows:;;;;;;), is a country and member state of the European Union located in southwestern Europe on the Iberian Peninsula...
gave the deeds to about 2 km² of land that was part of the Hacienda de Mayhaligue to the San Lazaro Hospital which served as a caring home for lepers in Manila at that time.

At the Santa Cruz Parish, a small park was built that linked the area into the headquarters of the Spanish cavalry
Cavalry
Cavalry or horsemen were soldiers or warriors who fought mounted on horseback. Cavalry were historically the third oldest and the most mobile of the combat arms...
, the building that once was the College of San Ildefonso, operated by the Jesuits. The district in the Spanish times also had a slaughter house and a meat market and up north was the Chinese cemetery.

The Franciscan
Franciscan
Most Franciscans are members of Roman Catholic religious orders founded by Saint Francis of Assisi. Besides Roman Catholic communities, there are also Old Catholic, Anglican, Lutheran, ecumenical and Non-denominational Franciscan communities....
fathers were given the responsibility to care for the lepers of the city and specifically the San Lazaro Hospital. A Fr. Felix Huertas developed San Lazaro into a refuge for the afflicted and it became a famous home for those afflicted in the north side of the Pasig River.

During World War II
World War II
World War II, or the Second World War , was a global conflict lasting from 1939 to 1945, involving most of the world's nations—including all of the great powers—eventually forming two opposing military alliances: the Allies and the Axis...
, the Japanese
Empire of Japan
The Empire of Japan is the name of the state of Japan that existed from the Meiji Restoration on 3 January 1868 to the enactment of the post-World War II Constitution of...
occupational forces caught unaware of the fast approaching the liberation by the combined American & Filipino soldiers in 1945 from the north, abandoned the northern banks of the Pasig River including Santa Cruz. Santa Cruz and much of the northern portions of Manila were spared from the artillery bombardment and to date, a number of pre-World War II buildings and houses still stand in Santa Cruz.