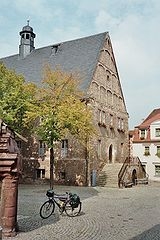 Encyclopedia
Sangerhausen is a town in Saxony-Anhalt
Saxony-Anhalt
Saxony-Anhalt is a landlocked state of Germany. Its capital is Magdeburg and it is surrounded by the German states of Lower Saxony, Brandenburg, Saxony, and Thuringia.Saxony-Anhalt covers an area of...
, Germany
Germany
Germany , officially the Federal Republic of Germany , is a federal parliamentary republic in Europe. The country consists of 16 states while the capital and largest city is Berlin. Germany covers an area of 357,021 km2 and has a largely temperate seasonal climate...
, capital of the district of Mansfeld-Südharz
Mansfeld-Südharz
- History :The district was established by merging the former districts of Sangerhausen and Mansfelder Land as part of the reform of 2007.- Towns and municipalities :The district Mansfeld-Südharz consists of the following subdivisions:-References:...
, without being part of it.
It is situated southeast of the Harz
Harz
The Harz is the highest mountain range in northern Germany and its rugged terrain extends across parts of Lower Saxony, Saxony-Anhalt and Thuringia. The name Harz derives from the Middle High German word Hardt or Hart , latinized as Hercynia. The legendary Brocken is the highest summit in the Harz...
, approx. 35 km east of Nordhausen
Nordhausen
Nordhausen is a town at the southern edge of the Harz Mountains, in the state of Thuringia, Germany. It is the capital of the district of Nordhausen...
, and 50 km west of Halle (Saale). in Sangerhausen live about 31 000 people.

Sangerhausen is one of the oldest towns in the historical region of Thuringia, being mentioned in a document of 991 as appertaining to the estates of the emperor.
By marriage it passed to the landgrave of Thuringia, and after 1056 it formed for a while an independent country. Having been again part of Thuringia, it fell in 1249 to Meissen
Meissen
Meissen is a town of approximately 30,000 about northwest of Dresden on both banks of the Elbe river in the Free State of Saxony, in eastern Germany. Meissen is the home of Meissen porcelain, the Albrechtsburg castle, the Gothic Meissen Cathedral and the Meissen Frauenkirche...
, and in 1291 to Brandenburg
Brandenburg
Brandenburg is one of the sixteen federal-states of Germany. It lies in the east of the country and is one of the new federal states that were re-created in 1990 upon the reunification of the former West Germany and East Germany. The capital is Potsdam...
. In 1372 it passed to Saxony and formed a portion of that territory until 1815, when it was united with Prussia
Prussia
Prussia was a German kingdom and historic state originating out of the Duchy of Prussia and the Margraviate of Brandenburg. For centuries, the House of Hohenzollern ruled Prussia, successfully expanding its size by way of an unusually well-organized and effective army. Prussia shaped the history...
. On 1 January 2008, the municipality of Wippra was incorporated.


In the vicinity are the famous Kyffhäuser Monument
Kyffhäuser Monument
The Kyffhäuser Monument , also known as the Barbarossa Monument or the Kaiser Wilhelm Monument , is a monument on the summit of the Kyffhäuser Mountain near Bad Frankenhausen in the state of Thuringia in central Germany.The monument, which totals 81 metres tall, was built in...
and the so-called Barbarossa Cave, the only anhydrite
Anhydrite
Anhydrite is a mineral – anhydrous calcium sulfate, CaSO4. It is in the orthorhombic crystal system, with three directions of perfect cleavage parallel to the three planes of symmetry. It is not isomorphous with the orthorhombic barium and strontium sulfates, as might be expected from the...
cave in Europe which can be visited by tourists.
Sangerhausen is also home to the Europa-Rosarium
Europa-Rosarium
The Europa-Rosarium , formerly the Rosarium Sangerhausen, is a municipal rose garden located at Steinberger Weg 3, Sangerhausen, Saxony-Anhalt, Germany, which describes itself at the largest rose collection in the world. It is open daily in the warmer months; an admission fee is charged...
, the largest collection of roses in the world, created in 1903.

Sangerhausen is twinned with: Zabrze
Zabrze
Zabrze is a city in Silesia in southern Poland, near Katowice. The west district of the Upper Silesian Metropolitan Union is a metropolis with a population of around 2 million...
Poland
Poland
Poland , officially the Republic of Poland , is a country in Central Europe bordered by Germany to the west; the Czech Republic and Slovakia to the south; Ukraine, Belarus and Lithuania to the east; and the Baltic Sea and Kaliningrad Oblast, a Russian exclave, to the north...