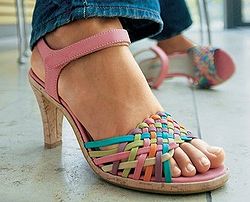 Sandals are an open type of outdoor footwear
Footwear
Footwear consists of garments worn on the feet, for fashion, protection against the environment, and adornment. Being barefoot is commonly associated with poverty, but some cultures chose not to wear footwear at least in some situations....
, consisting of a sole held to the wearer's foot by straps passing over the instep and, sometimes, around the ankle
Ankle
The ankle joint is formed where the foot and the leg meet. The ankle, or talocrural joint, is a synovial hinge joint that connects the distal ends of the tibia and fibula in the lower limb with the proximal end of the talus bone in the foot...
. While the distinction between sandals and other types of footwear can sometimes be blurry (as in the case of huaraches
Huarache (shoe)
Huaraches are a type of Mexican sandal.Huaraches are pre-Columbian in origin, and are made from woven leather. The leather is traditionally hand-woven. The name "Huarache" is derived from the P'urhépecha language term kwarachi...
—the woven leather footwear seen in Mexico—and peep-toe pumps), the common understanding is that a sandal leaves most of the upper part of the foot
Foot
The foot is an anatomical structure found in many vertebrates. It is the terminal portion of a limb which bears weight and allows locomotion. In many animals with feet, the foot is a separate organ at the terminal part of the leg made up of one or more segments or bones, generally including claws...
exposed, particularly the toe
Toe
Toes are the digits of the foot of a tetrapod. Animal species such as cats that walk on their toes are described as being digitigrade. Humans, and other animals that walk on the soles of their feet, are described as being plantigrade; unguligrade animals are those that walk on hooves at the tips of...
s. People may choose to wear sandals for several reasons, among them economy (sandals tend to require less material than shoes and are usually easier to construct), comfort in warm weather, and as a fashion
Fashion
Fashion, a general term for a currently popular style or practice, especially in clothing, foot wear, or accessories. Fashion references to anything that is the current trend in look and dress up of a person...
choice.

Usually, people wear sandals in warmer climates or during warmer parts of the year in order to keep their feet cool and dry. The risk of developing athlete's foot
Athlete's foot
Athlete's foot is a fungal infection of the skin that causes scaling, flaking, and itch of affected areas. It is caused by fungi in the genus Trichophyton and is typically transmitted in moist areas where people walk barefoot, such as showers or bathhouses...
is lower than with enclosed shoe
Shoe
A shoe is an item of footwear intended to protect and comfort the human foot while doing various activities. Shoes are also used as an item of decoration. The design of shoes has varied enormously through time and from culture to culture, with appearance originally being tied to function...
s, and the wearing of sandals may be part of the treatment
Therapy
This is a list of types of therapy .* Adventure therapy* Animal-assisted therapy* Aquatic therapy* Aromatherapy* Art and dementia* Art therapy* Authentic Movement* Behavioral therapy* Bibliotherapy* Buteyko Method* Chemotherapy...
regimen for such an infection.

The oldest known sandals (and the oldest known footwear of any type) were discovered in Fort Rock Cave
Fort Rock Cave
Fort Rock Cave was the site of the earliest evidence of human habitation in the U.S. state of Oregon prior to excavation of Paisley Caves. Fort Rock Cave featured numerous well-preserved sagebrush sandals, ranging from 9,000 to 13,000 years old....
in the U.S.
United States
The United States of America is a federal constitutional republic comprising fifty states and a federal district...
state of Oregon
Oregon
Oregon is a state in the Pacific Northwest region of the United States. It is located on the Pacific coast, with Washington to the north, California to the south, Nevada on the southeast and Idaho to the east. The Columbia and Snake rivers delineate much of Oregon's northern and eastern...
; radiocarbon dating
Radiocarbon dating
Radiocarbon dating is a radiometric dating method that uses the naturally occurring radioisotope carbon-14 to estimate the age of carbon-bearing materials up to about 58,000 to 62,000 years. Raw, i.e. uncalibrated, radiocarbon ages are usually reported in radiocarbon years "Before Present" ,...
of the sagebrush
Artemisia tridentata
Artemisia tridentata is a shrub or small tree from the family Asteraceae. Some botanists treat it in the segregate genus Seriphidium, as S. tridentatum W. A. Weber, but this is not widely followed...
bark from which they were woven indicates an age of at least 10,000 years.

The word sandal derives from the Greek word sandalon. The ancient Greeks distinguished between baxeae (sing. baxea), a sandal made of willow leaves, twigs, or fibres worn by comic actors and philosophers; and the cothurnus, a boot
Boot
A boot is a type of footwear but they are not shoes. Most boots mainly cover the foot and the ankle and extend up the leg, sometimes as far as the knee or even the hip. Most boots have a heel that is clearly distinguishable from the rest of the sole, even if the two are made of one piece....
sandal that rose above the middle of the leg, worn principally by tragic actors, horsemen, hunters, and by men of rank and authority. The sole of the latter was sometimes made much thicker than usual by the insertion of slices of cork, so as to add to the stature of the wearer.

The ancient Egyptians wore sandals made of palm-leaves and papyrus. They are sometimes observable on the feet of Egyptian statues. According to Herodotus
Herodotus
Herodotus was an ancient Greek historian who was born in Halicarnassus, Caria and lived in the 5th century BC . He has been called the "Father of History", and was the first historian known to collect his materials systematically, test their accuracy to a certain extent and arrange them in a...
, sandals of papyrus were a part of the required and characteristic dress of the Egyptian priests.

A sandal may have a sole made from rubber
Rubber
Natural rubber, also called India rubber or caoutchouc, is an elastomer that was originally derived from latex, a milky colloid produced by some plants. The plants would be ‘tapped’, that is, an incision made into the bark of the tree and the sticky, milk colored latex sap collected and refined...
, leather
Leather
Leather is a durable and flexible material created via the tanning of putrescible animal rawhide and skin, primarily cattlehide. It can be produced through different manufacturing processes, ranging from cottage industry to heavy industry.-Forms:...
, wood
Wood
Wood is a hard, fibrous tissue found in many trees. It has been used for hundreds of thousands of years for both fuel and as a construction material. It is an organic material, a natural composite of cellulose fibers embedded in a matrix of lignin which resists compression...
, tatami
Tatami
A is a type of mat used as a flooring material in traditional Japanese-style rooms. Traditionally made of rice straw to form the core , with a covering of woven soft rush straw, tatami are made in standard sizes, with the length exactly twice the width...
or rope
Rope
A rope is a length of fibres, twisted or braided together to improve strength for pulling and connecting. It has tensile strength but is too flexible to provide compressive strength...
. It may be held to the foot by a narrow thong that generally passes between the first and second toe, or by a strap or lace, variously called a latchet, sabot strap or sandal, that passes over the arch of the foot or around the ankle. A sandal may or may not have a heel
Heel (shoe)
A heel is the projection at the back of a shoe which rests below the heel bone. The shoe heel is used to improve the balance of the shoe or for decorative purposes. Sometimes raised, the high heel is common to a form of shoe often worn by women but sometimes by men too. See also stiletto heel.-...
(either low or high) and/or heel strap.

Among the many kinds of sandals are: