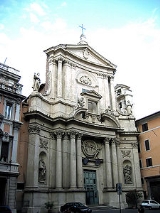 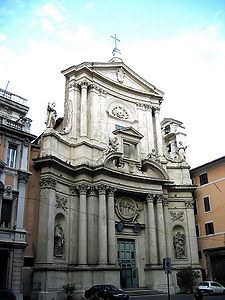 San Marcello al Corso is a church in
Churches of Rome
There are more than 900 churches in Rome. Most, but not all, of these are Roman Catholic, with some notable Roman Catholic Marian churches.The first churches of Rome originated in places where Christians met. They were divided into three categories:...
Rome
Rome
Rome is the capital of Italy and the country's largest and most populated city and comune, with over 2.7 million residents in . The city is located in the central-western portion of the Italian Peninsula, on the Tiber River within the Lazio region of Italy.Rome's history spans two and a half...
, Italy, devoted to Pope Marcellus I
Pope Marcellus I
Pope Saint Marcellus I, pope from May 308 to 309, succeeded Marcellinus, after a considerable interval, most probably in May or June 308.Under Maxentius he was banished from Rome in 309 on account of the tumult caused by the severity of the penances he had imposed on Christians who had lapsed under...
. It is located in via del Corso, the ancient via Lata, connecting Piazza Venezia
Piazza Venezia
The Piazza Venezia is a piazza in central Rome, Italy. It takes its name from Cardinal Venezia who built the adjacent Palazzo Venezia, the former embassy of the city of the Republic of Venice....
to Piazza del Popolo
Piazza del Popolo
Piazza del Popolo is a large urban square in Rome. The name in modern Italian literally means "People's Square", but historically it derives from the poplars after which the church of Santa Maria del Popolo, in the northeast corner of the piazza, takes its name.The piazza lies inside the northern...
.

While the tradition holds that the church was built over the prison of Pope Marcellus I
Pope Marcellus I
Pope Saint Marcellus I, pope from May 308 to 309, succeeded Marcellinus, after a considerable interval, most probably in May or June 308.Under Maxentius he was banished from Rome in 309 on account of the tumult caused by the severity of the penances he had imposed on Christians who had lapsed under...
(d. 309), it is known that the Titulus Marcelli was already present in 418, when Pope Boniface I
Pope Boniface I
Pope Saint Boniface I was pope from December 28, 418 to September 4, 422. He was a contemporary of Saint Augustine of Hippo, who dedicated to him some of his works....
was elected here. The "Septiformis" litany
Litany
A litany, in Christian worship and some forms of Jewish worship, is a form of prayer used in services and processions, and consisting of a number of petitions...
, commanded by Pope Gregory I
Pope Gregory I
Pope Gregory I , better known in English as Gregory the Great, was pope from 3 September 590 until his death...
in 590, saw the men moving from San Marcello.

Pope Adrian I
Pope Adrian I
Pope Adrian was pope from February 1, 772 to December 25, 795. He was the son of Theodore, a Roman nobleman.Shortly after Adrian's accession the territory ruled by the papacy was invaded by Desiderius, king of the Lombards, and Adrian was compelled to seek the assistance of the Frankish king...
, in the 8th century, built a church on the same place, which is currently under the modern church.

The corpse of Cola di Rienzo
Cola di Rienzo
Cola di Rienzo was an Italian medieval politician and popular leader, tribune of the Roman people in the mid-14th century.-Early career:Cola was born in Rome of humble origins...
, was held in the church for three days after his execution in 1354. On 22 May 1519 a fire destroyed the church. The money collected for its rebuilding was used to bribe the landsknecht
Landsknecht
Landsknechte were European, predominantly German mercenary pikemen and supporting foot soldiers from the late 15th to the late 16th century, and achieved the reputation for being the universal mercenary of Early modern Europe.-Etymology:The term is from German, Land "land, country" + Knecht...
s, who were pillaging the city during the Sack of Rome (1527)
Sack of Rome (1527)
The Sack of Rome on 6 May 1527 was a military event carried out by the mutinous troops of Charles V, Holy Roman Emperor in Rome, then part of the Papal States...
. The original plan to rebuild the church was designed by Jacopo Sansovino, who fled the city during the Sack and never returned to finish it. The work was continued by Antonio da Sangallo the Younger
Antonio da Sangallo the Younger
thumb|250px|The church of Santa Maria di Loreto near the [[Trajan's Market]] in [[Rome]], considered Sangallo's masterwork.thumb|250px|View of St. Patrick's Well in [[Orvieto]]....
, who rebuilt the church, but a Tiber
Tiber
The Tiber is the third-longest river in Italy, rising in the Apennine Mountains in Emilia-Romagna and flowing through Umbria and Lazio to the Tyrrhenian Sea. It drains a basin estimated at...
flood damaged it again in 1530. It was only in 1592 that the church was completed, and later Carlo Fontana
Carlo Fontana
Carlo Fontana was an Italian architect, who was in part responsible for the classicizing direction taken by Late Baroque Roman architecture.-Biography:...
built the facade. 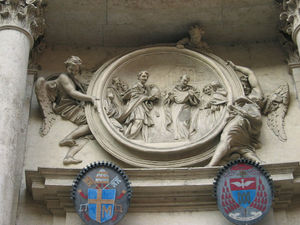 Under the main altar, decorated with 12th century opus sectile
Opus sectile
Opus sectile refers to an art technique popularized in the ancient and medieval Roman world where materials were cut and inlaid into walls and floors to make a picture or pattern. Common materials were marble, mother of pearl, and glass. The materials were cut in thin pieces, polished, then trimmed...
, are the relics of several saints, which include those of Pope Marcellus as well as Digna and Emerita
Digna and Emerita
Saints Digna and Emerita are venerated as saints by the Catholic Church. They were martyred at Rome.Their feast day is celebrated on September 22....
. The last chapel on the left is dedicated to St. Philip Benizi. The late-baroque decoration contains sculptures by Francesco Cavallini and reliefs by Ercole Ferrata
Ercole Ferrata
Ercole Ferrata was an Italian sculptor of the Roman Baroque.-Biography:A native of Pellio Inferiore, near Como, Ferrata initially apprenticed with Alessandro Algardi, and became one of his prime assistants...
and Antonio Raggi
Antonio Raggi
Antonio Raggi , also called Antonio Lombardo, was a sculptor of the Roman Baroque, originating from Ticino.-Biography:He was born in Vico Morcote on the Lake Lugano. His mentor in Rome for nearly three decades was Gianlorenzo Bernini...
. The first chapel on the left has the double tomb of Cardinal Giovanni Michiel and his grandson Antonio Orso sculpted by Jacopo Sansovino
Jacopo Sansovino
Jacopo d'Antonio Sansovino was an Italian sculptor and architect, known best for his works around the Piazza San Marco in Venice. Andrea Palladio, in the Preface to his Quattro Libri was of the opinion that Sansovino's Biblioteca Marciana was the best building erected since Antiquity...
.

Behind the facade is a Crucifixion (1613) by Giovanni Battista Ricci. Along the first chapel is an Annunciation by Lazzaro Baldi
Lazzaro Baldi
Lazzaro Baldi was an Italian painter of the Baroque period, active mainly in Rome.-Biography:Baldi was born in Pistoia and died in Rome. He was part of the large studio of Pietro da Cortona, and became adept at fresco technique. He painted a David and Goliath for Alexander VII in the Palazzo...
; in the second Martyrdom of Sts. Digna and Emerita (1727) of Pietro Barbieri; in the third Madonna with the Child, a fresco of late 14th century, episodes of the life of the Virgin
Life of the Virgin
The Life of the Virgin, showing narrative scenes from the life of Mary, the mother of Jesus, is a common subject for pictorial cycles in Christian art, often complementing, or forming part of, a cycle on the Life of Christ. In both cases the number of scenes shown varies greatly with the space...
by Francesco Salviati
Francesco Salviati
Francesco Salviati may refer to:* Francesco Salviati , archbishop of Pisa, involve in the Pazzi Conspiracy* Francesco de' Rossi , Mannerist artist...
, fresco and paintings of Giovan Battista Ricci; in the fourth chapel a Creation of Eve and the evangelists Mark and John, frescoes by Perin del Vaga
Perin del Vaga
Perino del Vaga was an Italian painter of the Late Renaissance/Mannerism.-Biography:...
, Matthew and Luke begun by Perin del Vaga and finished by Daniele da Volterra
Daniele da Volterra
Daniele Ricciarelli , better known as Daniele da Volterra, was an Italian mannerist painter and sculptor.He is best remembered for his association, for better or worse, with the late Michelangelo. Several of Daniele's most important works were based on designs made for that purpose by Michelangelo...
. Inside is a cyborium (1691) designed by Carlo Bizzaccheri; in the fifth chapel is a monument to the cardinal Fabrizio Paolucci (1726) by Pietro Bracci
Pietro Bracci
Pietro Bracci was an Italian sculptor working in the Late Baroque manner.-Biography:He was born in Rome and became a student of Giuseppe Bartolomeo Chiari and Camillo Rusconi...
and a monument to cardinal Camillo Paolucci by Tommaso Righi
Tommaso Righi
Tommaso Righi was an Italian sculptor and stuccator with a practice in Rome. His marble and stucco funeral monument to Carlo Pio Balestra , patron of the Church of Santi Luca e Martina, in the Roman Forum, is probably his most prominent commission...
(1776) and wall paintings by Aureliano Milani
Aureliano Milani
Aureliano Milani was an Italian painter of the late-Baroque period, active in Bologna and Rome.He was a pupil of Cesare Gennari and Lorenzo Pasinelli in Bologna, although he also adhered to a style derived from the Carracci. He took up his residence in Rome, being ill able to support a family of...
. On the left nave, in the fifth chapel, is a San Filippo Benizi (1725) by Pier Leone Ghezzi
Pier Leone Ghezzi
Pier Leone Ghezzi was an Italian Rococo painter and caricaturist active in Rome.Ghezzi was born in Rome. His father, Giuseppe Ghezzi, , also trained Antonio Amorosi, and was a secretary to the Roman Accademia di San Luca...
; in the fourth Conversion of Saint Paul (1560) by Federico Zuccari
Federico Zuccari
Federico Zuccari, also known as Federigo Zuccaro , was an Italian Mannerist painter and architect, active both in Italy and abroad.-Biography:Zuccari was born at Sant'Angelo in Vado, near Urbino ....
and his brother Taddeo and, on the sides, of History of Saint Paul. Inside of the chapel has busts of Muzio, Roberto, Lelio Frangipane by Alessandro Algardi
Alessandro Algardi
Alessandro Algardi was an Italian high-Baroque sculptor active almost exclusively in Rome, where for the latter decades of his life, he was the major rival of Gian Lorenzo Bernini.-Early years:...
(1630-40). In the third chapel on the left is a Doloroso by Pietro Paolo Naldini
Pietro Paolo Naldini
Pietro Paolo Naldini , also known as Paolo Naldini, was an Italian sculptor.Naldini specialized in sculpting religious-themed works, primarily angels. He is known to have previously collaborated with Gian Lorenzo Bernini.-References:...
, Sacrifice of Isaac and discovery of Moses by Domenico Corvi
Domenico Corvi
Domenico Corvi was an Italian painter at the close of the 18th century, active in an early Neoclassic style in Rome and surrounding sites.-Biography:...
; in the first Madonna and seven Saints by Agostino Masucci
Agostino Masucci
Agostino Masucci was an Italian painter of the late-Baroque or Rococo period.Born in Rome, he initially apprenticed with Andrea Procaccino, and then became a member of the studio of Carlo Maratta. He joined the Accademia di San Luca in 1724, and from 1736 to 1738, he was director or Principe...
.

The church is administered and owned by the Servite Order
Servite Order
The Servite Order is one of the five original Catholic mendicant orders. Its objects are the sanctification of its members, preaching the Gospel, and the propagation of devotion to the Mother of God, with special reference to her sorrows. The members of the Order use O.S.M. as their post-nominal...
since 1369.