Encyclopedia
San Juan is a 1st class municipality in the province of Batangas, Philippines
Philippines
The Philippines , officially known as the Republic of the Philippines , is a country in Southeast Asia in the western Pacific Ocean. To its north across the Luzon Strait lies Taiwan. West across the South China Sea sits Vietnam...
. It occupies the easternmost portion of the province, 43 kilometers east of Batangas City
Batangas City
- Foreign Rule :The first Spanish missionaries arrived in Batangas City since 1572. Finally on 1581 Spanish authorities governing the Philippines created a pueblo in the area which included the hill where the present Provincial Capitol of Batangas stands after the formal end of the Coumintang...
, also the same distance southwest of Lucena City
Lucena City
Metro Lucena has an estimated population of 700,000 which is mostly concentrated in the flat south-central portion of Quezon, which includes the cities of Lucena and Tayabas, Sariaya, Candelaria, Lucban & Pagbilao . The people are often characterized as friendly and hardworking...
, Quezon, and 115 kilometers away from Manila
Manila
Manila is the capital of the Philippines. It is one of the sixteen cities forming Metro Manila.Manila is located on the eastern shores of Manila Bay and is bordered by Navotas and Caloocan to the north, Quezon City to the northeast, San Juan and Mandaluyong to the east, Makati on the southeast,...
. According to the latest census, it has a population of 87,276 people in 16,519 households.

San Juan has a majestic coastline with several beach resorts to visit for swimming, diving and other outdoor activities. 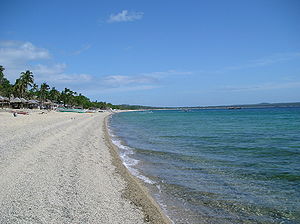 San Juan is politically subdivided into 41 barangay
Barangay
A barangay is the smallest administrative division in the Philippines and is the native Filipino term for a village, district or ward...
s.

Lance Oñate - Search for the Star in a Million contestant

"Kapitan" Leon Quizon Mercado - Katipunero, Participated in the insurrection against the US, Farmer, "Coconut King of Batangas" till the early 1960's

Architect Leon Sales Mercado Jr. - Philippine Architect. Founder/Principal Architect/President of LAS Mercado and Associates from the 1960's to the 90's, a firm that specialized/pioneered in the design of large residential development/condominium complexes and private residences in the greater Manila area and suburbs (First to break the 20 floor barrier for high-rise construction in the Philippines). Designer of various higher education facilities (UP). President and founder of "Rainbow Philippines" a citizen's band radio organization in the 70's. Youngest son of "Kapitan" Leon Quizon Mercado.