Encyclopedia
Metro Lucena has an estimated population of 700,000 which is mostly concentrated in the flat south-central portion of Quezon, which includes the cities of Lucena and Tayabas, Sariaya, Candelaria, Lucban & Pagbilao . The people are often characterized as friendly and hardworking. It is the center of commerce and tourism in Quezon Province.

Although Lucena is a highly urbanized city
Cities of the Philippines
A city is a tier of local government in the Philippines. All Philippine cities are chartered cities, whose existence as corporate and administrative entities is governed by their own specific charters in addition to the Local Government Code of 1991, which specifies the administrative structure...
, its charter permits its citizens to vote for provincial elective officials (provincial governor, vice governor, and board).

Lucena is politically subdivided into 33 barangay
Barangay
A barangay is the smallest administrative division in the Philippines and is the native Filipino term for a village, district or ward...
s.

Economic activities in Lucena are heavily concentrated in the poblacion and other sub-urban barangays where the highly dense and constricted Central Business District (CBD) is home to a large cluster of different business enterprises. As population grows in tandem with new and promising business prospects, business activities spill over adjoining barangays, thus forming mini satellite commercial areas.

Other commercial strips are located at 10 suburban barangays where both retail and wholesale trade, including other essential services, are being engaged in. Big commercial depots and warehouses in these suburban barangays do business in sales, distribution, and transport of assorted business products in bulk.

Of the total 8,316.90 hectare land area of Lucena City, 19 percent or 1,651.77 hectares cover the existing built up area. Almost 3% of this or 46.62 hectares cover the industrial section, located in different barangays of the city. These areas are home to significant industrial and manufacturing activities.

Lucena is also known as the "Cocopalm City of the South". Nestled amidst a wide expanse of coconut lands, Lucena has coconut oil mills which produce oil-based household products like cooking oil, soap, lard, margarine, and oil based medicines.The well known JnJ Oil, Exora cooking oil and Vegetable lard, Miyami Cooking Oil are proudly made in this city. Car assembly/manufacturing plants have also established in the city turning out quality vehicles and accessories while Manila-based car shops are starting to put up some branches.

Road network provides access from all key cities and towns in the island of Luzon to this highly urbanized capital. Well-paved radial and by-pass routes criss-crossing in and out of the city facilitate the transport of unlimited assortment of merchandise, supplies, and raw materials to and from the city on a round-the-clock basis.

Over the years, it was observed that a growing number of visitors from other places come to Lucena. Travelers of various types and sizes are drawn to Lucena because of modern facilities and good amenities that could be found in the city such as Quezon Convention Center, Kalilayan Civic Centre, Sentro Pastoral Auditorium, Alcala Sports Complex a two time host of a Palarong Pambansa, Manuel S. Enverga Gymnasium, and Sacred Heart College Gym and Marcial Punzalan Gymnasium.

Pasayahan (Chami Festival) is one of the most famous festivals in Quezon
Quezon
-History:Originally, what now forms Quezon was divided among the provinces of Batangas, Laguna, and Nueva Ecija. The area was first explored by Juan de Salcedo in 1571-1572, during his expedition from Laguna to Camarines provinces....
. It always celebrates every last week of the month of May.

Lucena City has a central transportation hub aptly called the Lucena Grand Central Terminal located in Barangay Ilayang Dupay, just midway through the Bicol Region
Bicol Region
The Bicol Region or Bicolandia is one of the 17 regions of the Philippines. Its regional center is Legazpi City...
and back. New and modern buses ply the route Baguio-Lucena, Buendia/LRT-Lucena, EDSA Pasay-Lucena, Cubao/Kamias-Lucena and Alabang/Starmall-Lucena. It serves not only Manila
Manila
Manila is the capital of the Philippines. It is one of the sixteen cities forming Metro Manila.Manila is located on the eastern shores of Manila Bay and is bordered by Navotas and Caloocan to the north, Quezon City to the northeast, San Juan and Mandaluyong to the east, Makati on the southeast,...
or Baguio-bound buses but also buses going toward the upland and far-flung areas of Quezon province, particularly Bondoc Peninsula towns. Bus companies such as JAC Liner, Lucena Lines, JAM Liner, DLTBCo, A&B, BALGCO, Raymond Transportation, Superlines, ALPS, Philtranco, Penafrancia, Isarog, Cagsawa, and Dela Rosa Bus Lines bring back and forth passengers to Manila and Lucena.

Lucena also has a wide network of jeepney routes, all emanating from the city proper (Bayan) and reaching out to the major barangays of the city, as well as nearby towns. Thousand of tricycles also roam the streets of the city, bringing passengers right at their point of destination. These tricycles usually are the mode of transport when night falls.

The Philippine National Railways is on the process of rehabilitating the Existing Manila-Bicol and Baguio-Bicol Railway Line, which includes stops in Quezon province, including Lucena, which traditionally then is a major loading & pick-up point for passengers and cargoes alike when the railway system was once the primary transportation mode going to Manila. Modern air-conditioned coaches will ply this route. 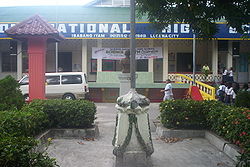 In 2006, the city had a literacy rate of 98.6 percent. It has eight tertiary and 14 secondary schools including public and private.

Aside from tertiary schools, the city also has a expanse footprint on the pre-school, primary and secondary levels of education, both in public and private schools. There are numerous day-care centers found all over the city.

Lucena has private and public hospitals that are capable of providing most common and advanced medical services, as well as in handling medical emergencies. Both types of institutions are considered to provide the same standard of healthcare and services, differing mainly with the medical and diagnostic facilities at hand.

These are staffed with qualified medical practitioners that are well-versed in English. The doctors are graduates of the many top reputable medical schools in the Philippines; most have pursued further studies and training in the United States. Likewise, the nurses are the products of the many credible nursing schools in the country. These same institutions have produced the many Filipino nurses working in the United States, Europe, Middle East, and other parts of the world.