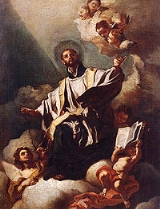 For the cardinal, see Thomas Cajetan
Thomas Cajetan
Thomas Cajetan , also known as Gaetanus, commonly Tommaso de Vio , was an Italian cardinal. He is perhaps best known among Protestants for his opposition to the teachings of Martin Luther and the Protestant Reformation while he was the Pope's Legate in Wittenberg, and perhaps best known among...
.
For Saint Cajetan Catanoso, see Gaetano Catanoso
Gaetano Catanoso
Saint Gaetano Catanoso was an Italian parish priest canonized by Pope Benedict XVI in 2005.Born to a prosperous and generous family in Chorio, a small village outside of Reggio Calabria in the Aspromonte. Gaetano was one of eight children. He was ordained on September 20, 1902 and served as a...
.

Saint Cajetan (October 1, 1480 – August 7, 1547), born Gaetano dei Conti di Tiene (also Thiene
Thiene
Thiene is a city and comune in the province of Vicenza, in northern Italy, located approximately 75 km west of Venice and 200 km east of Milan....
), is a Catholic Church saint
Saint
A saint is a holy person. In various religions, saints are people who are believed to have exceptional holiness.In Christian usage, "saint" refers to any believer who is "in Christ", and in whom Christ dwells, whether in heaven or in earth...
and founder of the order
Religious order
A religious order is a lineage of communities and organizations of people who live in some way set apart from society in accordance with their specific religious devotion, usually characterized by the principles of its founder's religious practice. The order is composed of initiates and, in some...
of the Clerics Regular, better known as the Theatines
Theatines
The Theatines or the Congregation of Clerks Regular of the Divine Providence are a male religious order of the Catholic Church, with the post-nominal initials "C.R."-Foundation:...
. He is not to be confused with his contemporary, Cardinal Thomas Cajetan
Thomas Cajetan
Thomas Cajetan , also known as Gaetanus, commonly Tommaso de Vio , was an Italian cardinal. He is perhaps best known among Protestants for his opposition to the teachings of Martin Luther and the Protestant Reformation while he was the Pope's Legate in Wittenberg, and perhaps best known among...
.

Predisposed to piety by his mother, he studied law
Law
Law is a system of rules and guidelines which are enforced through social institutions to govern behavior, wherever possible. It shapes politics, economics and society in numerous ways and serves as a social mediator of relations between people. Contract law regulates everything from buying a bus...
in Padua
Padua
Padua is a city and comune in the Veneto, northern Italy. It is the capital of the province of Padua and the economic and communications hub of the area. Padua's population is 212,500 . The city is sometimes included, with Venice and Treviso, in the Padua-Treviso-Venice Metropolitan Area, having...
, receiving his degree as doctor utriusque juris (i.e., in civil and canon law) at age 24. In 1506 he worked as a diplomat for Pope Julius II
Pope Julius II
Pope Julius II , nicknamed "The Fearsome Pope" and "The Warrior Pope" , born Giuliano della Rovere, was Pope from 1503 to 1513...
with whom he helped reconcile the Venetian Republic
Republic of Venice
The Republic of Venice or Venetian Republic was a state originating from the city of Venice in Northeastern Italy. It existed for over a millennium, from the late 7th century until 1797. It was formally known as the Most Serene Republic of Venice and is often referred to as La Serenissima, in...
. But he was not ordained a priest until the year 1516.

Recalled to Vicenza in the following year by the death of his mother, he founded a hospital
Hospital
A hospital is a health care institution providing patient treatment by specialized staff and equipment. Hospitals often, but not always, provide for inpatient care or longer-term patient stays....
for incurables there. His interests were as much or more devoted to spiritual healing than the physical kind. He intended to form a group that would combine the spirit of monasticism
Monasticism
Monasticism is a religious way of life characterized by the practice of renouncing worldly pursuits to fully devote one's self to spiritual work...
with the exercises of the active ministry. The death of Pope Adrian VI
Pope Adrian VI
Pope Adrian VI , born Adriaan Florenszoon Boeyens, served as Pope from 9 January 1522 until his death some 18 months later...
in 1523 led him to withdraw from the Papal Court, founding an order based on these ideals, "the Oratory of Divine Love."

This new congregation was canonically erected by Pope Clement VII
Pope Clement VII
Clement VII , born Giulio di Giuliano de' Medici, was a cardinal from 1513 to 1523 and was Pope from 1523 to 1534.-Early life:...
in the year 1524. One of his four companions was Giovanni Pietro Carafa, the Bishop of Chieti, elected first superior of the order, who later became Pope as Paul IV
Pope Paul IV
Pope Paul IV, C.R. , né Giovanni Pietro Carafa, was Pope from 23 May 1555 until his death.-Early life:Giovanni Pietro Carafa was born in Capriglia Irpina, near Avellino, into a prominent noble family of Naples...
. From the name of the city of Chieti
Chieti
Chieti is a city and comune in Central Italy, 200 km northeast of Rome. It is the capital of the Province of Chieti in the Abruzzo region...
(in ), arose the name by which the order is known, the "Theatines
Theatines
The Theatines or the Congregation of Clerks Regular of the Divine Providence are a male religious order of the Catholic Church, with the post-nominal initials "C.R."-Foundation:...
". The order grew at a fairly slow pace: there were only twelve Theatines during the sack of Rome in 1527
Sack of Rome (1527)
The Sack of Rome on 6 May 1527 was a military event carried out by the mutinous troops of Charles V, Holy Roman Emperor in Rome, then part of the Papal States...
. That event is said to have seen them harassed by anti-Catholic forces, causing them to flee to Venice where Cajetan met Saint Jerome Emiliani
Jerome Emiliani
Gerolamo Emiliani , was an Italian humanitarian, founder of the Somaschi Fathers, and saint. He was canonized in 1767 and is the patron saint of orphans.-Biography:...
, whom he assisted in the establishment of his Congregation of Clerks Regular. In 1533 he founded a house in Naples which aided those who wished to check the advances of Lutheranism
Lutheranism
Lutheranism is a major branch of Western Christianity that identifies with the theology of Martin Luther, a German reformer. Luther's efforts to reform the theology and practice of the church launched the Protestant Reformation...
. The year 1540 found him in Venice again and from there he extended his work to Verona
Verona
Verona ; German Bern, Dietrichsbern or Welschbern) is a city in the Veneto, northern Italy, with approx. 265,000 inhabitants and one of the seven chef-lieus of the region. It is the second largest city municipality in the region and the third of North-Eastern Italy. The metropolitan area of Verona...
.

Despite successes, he died of grief in Naples
Naples
Naples is a city in Southern Italy, situated on the country's west coast by the Gulf of Naples. Lying between two notable volcanic regions, Mount Vesuvius and the Phlegraean Fields, it is the capital of the region of Campania and of the province of Naples...
, in the Kingdom of Naples
Kingdom of Naples
The Kingdom of Naples, comprising the southern part of the Italian peninsula, was the remainder of the old Kingdom of Sicily after secession of the island of Sicily as a result of the Sicilian Vespers rebellion of 1282. Known to contemporaries as the Kingdom of Sicily, it is dubbed Kingdom of...
. He was beatified on October 8, 1629, by Pope Urban VIII
Pope Urban VIII
Pope Urban VIII , born Maffeo Barberini, was pope from 1623 to 1644. He was the last pope to expand the papal territory by force of arms, and was a prominent patron of the arts and reformer of Church missions...
. On April 12, 1671, Cajetan was canonized together with Rose of Lima, Luis Beltrán
Louis Bertrand (saint)
Saint Louis Bertrand, O.P. was a Spanish Dominican who preached in South America during the 16th century, and is venerated as a saint by the Catholic Church.-Early life:...
, Francisco de Borja and Felipe Benicio.

Saint Cajetan's feast day is celebrated on August 7. He is known as the patron saint
Patron saint
A patron saint is a saint who is regarded as the intercessor and advocate in heaven of a nation, place, craft, activity, class, clan, family, or person...
of the unemployed, gamblers, job seekers and good fortune. His remains are in the church of San Paolo Maggiore
San Paolo Maggiore
San Paolo Maggiore is a basilica church in Naples, southern Italy, and the burial place of Gaetano Thiene, known as Saint Cajetan, founder of the Order of Clerics Regular .-History:...
in Naples; outside the church is Piazza San Gaetano, with a statue of the saint.

Saint Cajetan is one of the patron saints of Ħamrun, and his feast is celebrated the first Sunday after August 7. Many are the people who attend the celebrations every year, and the feast's Sunday Morning March is one of the most popular Marches in Malta. Early in the evening, a procession with the beautiful statue of Saint Cajetan leaves the church and is carried in procession all around Hamrun.

San Gejtanu Parish is located almost at the centre of Ħamrun, and this church was home for Saint Gorg Preca, a Maltese Saint who used to attend Holy Mass in this parish. Saint Gorg Preca's life is similar to that of Saint Cajetan, especially when considering their love for Jesus
Jesus
Jesus of Nazareth , commonly referred to as Jesus Christ or simply as Jesus or Christ, is the central figure of Christianity...
, their values, and the good examples they both gave in their lives.

Saint Cajetan's Church was built in the 19th century and is of Neo-Gothic Style. The interior was painted by Emvin Cremona, whilst the titular statue was Carlo Darmanin's work. Ħamrunizi (people of Ħamrun) are very much devoted to their patron saint and many are those asking for his intercession.