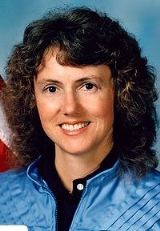 Overview
Christa McAuliffe was an American
United States
The United States of America is a federal constitutional republic comprising fifty states and a federal district...
teacher
Teacher
A teacher or schoolteacher is a person who provides education for pupils and students . The role of teacher is often formal and ongoing, carried out at a school or other place of formal education. In many countries, a person who wishes to become a teacher must first obtain specified professional...
from Concord, New Hampshire
Concord, New Hampshire
The city of Concord is the capital of the state of New Hampshire in the United States. It is also the county seat of Merrimack County. As of the 2010 census, its population was 42,695....
, and was one of the seven crew members killed in the Space Shuttle Challenger disaster
Space Shuttle Challenger disaster
The Space Shuttle Challenger disaster occurred on January 28, 1986, when Space Shuttle Challenger broke apart 73 seconds into its flight, leading to the deaths of its seven crew members. The spacecraft disintegrated over the Atlantic Ocean, off the coast of central Florida at 11:38 am EST...
.

She received her bachelor's degree in education and history from Framingham State College
Framingham State College
Framingham State University is located in Framingham, Massachusetts, from Boston. It offers undergraduate programs in a range of subjects from Art to Biology to Communication Arts, and graduate programs including MBA, MEd, and MSc...
in 1970, and also a Master of Arts from Bowie State University
Bowie State University
Bowie State University , is a public university located on 355½ acres in unincorporated Prince George's County, Maryland, United States, north of the suburban city of Bowie. Bowie State is part of the University System of Maryland...
in 1978. She took a teaching post as a social studies teacher at Concord High School
Concord High School (New Hampshire)
Concord High School is a high school in Concord, New Hampshire in the United States.- History :Concord's first public high school was established in 1846. The original building was the building on the corner of State and School Streets. A new school house was built in 1862, which stood until April...
in New Hampshire in 1982.