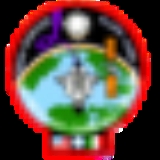 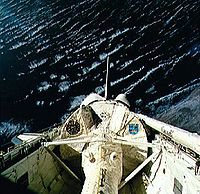 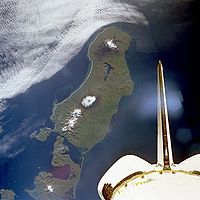 Spacelab-J—a joint NASA and National Space Development Agency of Japan (NASDA) mission using a manned Spacelab module—conducted microgravity investigations in materials and life sciences. The international crew, consisting of the first Japanese astronaut to fly aboard the Shuttle, the first African-American woman to fly in space and, contrary to normal NASA policy, the first married couple to fly on the same space mission (Lee
Mark C. Lee
Mark Charles Lee USAF Colonel, is a former NASA astronaut who flew on four Space Shuttle missions. He retired from the Air Force and NASA on July 1, 2001.-Early life:...
and Davis
Jan Davis
Nancy Jan Davis is a former American astronaut. A veteran of three space flights, Dr. Davis has logged over 673 hours in space. Dr. Davis is now retired from NASA.-Early life:She was born in Cocoa Beach, Florida, but considers Huntsville, Alabama, to be her hometown...
), was divided into red and blue teams for around the clock operations. Spacelab-J included 24 materials science and 20 life sciences experiments, of which 35 were sponsored by NASDA, 7 by NASA and 2 collaborative efforts.

Also on board was were two experiments prepared by Ashford School
Ashford School
Ashford School is an independent school in East Hill, Ashford, Kent. For the vast majority of its 111 years of existence it has been a school purely for girls but in 2006 boys were admitted in some year groups and it is now a school for both sexes from the age of 3 to 18 offering boarding and day...
in Kent which, at the time, was a girls-only school. The school in the UK who had won a competition run by Independent Television News
Independent Television News
ITN is a news and content provider with headquarters in the United Kingdom. It is made up of four key businesses: ITN News, ITN Source, ITN Productions and ITN Consulting. The ITN logotype can be displayed in any of 4 different colours, each of which represents a business unit. This is the...
. The experiments were contained in G-520. The first one injected a few gram
Gram
The gram is a metric system unit of mass....
s of cobalt nitrate crystals to a sodium silicate
Sodium silicate
Sodium silicate is the common name for a compound sodium metasilicate, Na2SiO3, also known as water glass or liquid glass. It is available in aqueous solution and in solid form and is used in cements, passive fire protection, refractories, textile and lumber processing, and automobiles...
to create a chemical garden
Chemical Garden
A chemical garden is an experiment in chemistry normally done by adding solid metal salts such as copper sulfate or cobalt chloride to an aqueous solution of sodium silicate . This results in growth of plant like forms in minutes to hours. The chemical garden was first observed and described by...
in weightless condition. The growths, which were photographed 66 times as they developed, spread out in random directions twisting and in some cases forming spiral shapes. A second experiment to investigate how Liesegang rings
Liesegang rings
Liesegang rings are a phenomenon seen in many, if not most, chemical systems undergoing a precipitation reaction, under certain conditions of concentration and in the absence of convection.-History:...
formed in space failed to operate correctly due to friction
Friction
Friction is the force resisting the relative motion of solid surfaces, fluid layers, and/or material elements sliding against each other. There are several types of friction:...
in parts of the mechanism. On its return the experiment was exhibited in the London Science Museum.