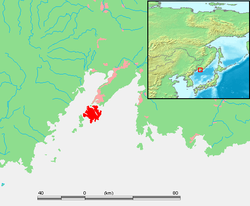 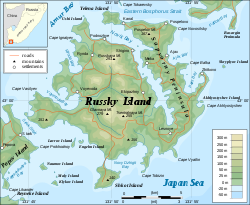 Russky Island is a Russia
Russia
Russia or , officially known as both Russia and the Russian Federation , is a country in northern Eurasia. It is a federal semi-presidential republic, comprising 83 federal subjects...
n island off Vladivostok
Vladivostok
The city is located in the southern extremity of Muravyov-Amursky Peninsula, which is about 30 km long and approximately 12 km wide.The highest point is Mount Kholodilnik, the height of which is 257 m...
, in the Peter the Great Gulf
Peter the Great Gulf
The Peter the Great Gulf is the largest gulf of the Sea of Japan adjoining the coast of Russia's Primorski Krai...
, Sea of Japan
Sea of Japan
The Sea of Japan is a marginal sea of the western Pacific Ocean, between the Asian mainland, the Japanese archipelago and Sakhalin. It is bordered by Japan, North Korea, Russia and South Korea. Like the Mediterranean Sea, it has almost no tides due to its nearly complete enclosure from the Pacific...
. It is located about 9,334 kilometres east of Moscow
Moscow
Moscow is the capital, the most populous city, and the most populous federal subject of Russia. The city is a major political, economic, cultural, scientific, religious, financial, educational, and transportation centre of Russia and the continent...
. The Eastern Bosphorus
Eastern Bosphorus
Eastern Bosphorus is a strait that separates the Muravyov-Amursky Peninsula and Russky Island, and connects Amur Bay and Ussuri Bay.The depth is up to 50 m...
separates the island from the Muravyov-Amursky Peninsula
Muravyov-Amursky Peninsula
The Muravyov-Amursky Peninsula is a peninsula in the Peter the Great Gulf, which it subdivides into the Amur Bay to the west and the Ussuri Bay to the east. It is approximately 30 km long and 12 km wide....
.

In 1992, four soldiers serving in the island's isolated garrison starved to death and dozens of others were hospitalized suffering from starvation. Their commanders had failed to send them rations for months and the matter became a national scandal http://www.guardian.co.uk/international/story/0,,2002330,00.html.

The British daily, The Guardian
The Guardian
The Guardian, formerly known as The Manchester Guardian , is a British national daily newspaper in the Berliner format...
reported on January 31, 2007 that President Vladimir Putin
Vladimir Putin
Vladimir Vladimirovich Putin served as the second President of the Russian Federation and is the current Prime Minister of Russia, as well as chairman of United Russia and Chairman of the Council of Ministers of the Union of Russia and Belarus. He became acting President on 31 December 1999, when...
was formulating plans to develop the island as a large scale tourist resort. The plan was reported as a response to growing Chinese economic power
Economy of the People's Republic of China
The People's Republic of China ranks since 2010 as the world's second largest economy after the United States. It has been the world's fastest-growing major economy, with consistent growth rates of around 10% over the past 30 years. China is also the largest exporter and second largest importer of...
in the region and the fear of possible Chinese economic hegemony.

On September 3, 2008 Russian President Dmitry Medvedev
Dmitry Medvedev
Dmitry Anatolyevich Medvedev is the third President of the Russian Federation.Born to a family of academics, Medvedev graduated from the Law Department of Leningrad State University in 1987. He defended his dissertation in 1990 and worked as a docent at his alma mater, now renamed to Saint...
signed an order for the construction of a bridge between Russky Island and Vladivostok
Vladivostok
The city is located in the southern extremity of Muravyov-Amursky Peninsula, which is about 30 km long and approximately 12 km wide.The highest point is Mount Kholodilnik, the height of which is 257 m...
. When completed it will be the cable-stayed bridge
Cable-stayed bridge
A cable-stayed bridge is a bridge that consists of one or more columns , with cables supporting the bridge deck....
with the longest span in the world, with 1104 meters. About $US6 billion has been set aside for the development of the island and Vladivostok in preparation for the 2012 APEC summit
APEC Russia 2012
The APEC Russia 2012 summit will be the 24th annual gathering of APEC leaders. Leaders from the member economies will meet on Russky Island, off the coast of Vladivostok, Russia in 2012....
, which is to be held on Russky Island.http://en.rian.ru/russia/20080903/116518193.html

The construction of a new campus for Far Eastern Federal University will provide facilities for the 2012 APEC conference. Designed by US-based architecture and planning firm KlingStubbins, the campus will provide 700,000 SF of classroom space for humanities and sciences, as well as residences for approximately 11,000 students and faculty.

Plans for the construction of the Russian president's Far-Eastern federal residence in Boyarin Bay were approved by the APEC summit.

By 1889, Russky Island, with its Fort Pospelov, formed part of the defences of the fortress city of Vladivostok as developed by Colonel K. I. Velichko. Over several years, the initial temporary wooden structures were replaced by stone.