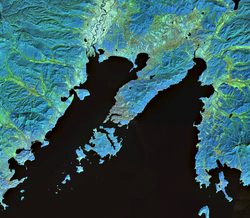 The Peter the Great Gulf (Russian: Залив Петра Великого) is the largest gulf of the Sea of Japan
Sea of Japan
The Sea of Japan is a marginal sea of the western Pacific Ocean, between the Asian mainland, the Japanese archipelago and Sakhalin. It is bordered by Japan, North Korea, Russia and South Korea. Like the Mediterranean Sea, it has almost no tides due to its nearly complete enclosure from the Pacific...
adjoining the coast of Russia
Russia
Russia or , officially known as both Russia and the Russian Federation , is a country in northern Eurasia. It is a federal semi-presidential republic, comprising 83 federal subjects...
's Primorski Krai. The Muravyov-Amursky Peninsula
Muravyov-Amursky Peninsula
The Muravyov-Amursky Peninsula is a peninsula in the Peter the Great Gulf, which it subdivides into the Amur Bay to the west and the Ussuri Bay to the east. It is approximately 30 km long and 12 km wide....
and a chain of outlying islands divides the gulf of about 6,000 km² into the Amur Bay
Amur Bay
Amur Bay is a north western part of Peter the Great Gulf.Its length is 65 km, width is 10-20 km, and depth is approximately 20 m....
and the Ussuri Bay
Ussuri Bay
Ussuri Bay is a northern east part of Peter the Great Gulf.Its length is 67 km, a wide is 10–55 km, depth is approximately 40 m.Ussuri Bay is a popular recreation area in Primorsky Krai ....
.

The coastline of about 1,500 kilometers is indented by many smaller bays, the chief of which are the Zolotoy Rog
Zolotoy Rog
Zolotoy Rog Bay is a sheltered horn-shaped bay separated from the Peter the Great Gulf of the Sea of Japan by Shkota Peninsula on the north-west, Cape Goldobina on the east-north-east, and Cape Tigrovy on the west. The bay is seven kilometers long, with a width of about two kilometers and a depth...
, Diomede Bay
Diomede Bay
The Diomede Bay is a landlocked inlet of the Peter the Great Gulf in the Russian city of Vladivostok. The bay derives its name from Diomedes, the first Russian brig to cast anchor in the bay back in 1862. The coastline is dotted with run-down fisheries, fishing wharves, and depots....
, Vostok Bay
Vostok Bay
Vostok Bay is a small bay in Sea of Japan to the west of Trudny Peninsula. It's a part of Peter the Great Gulf.Bay is a shallow but its fauna is rich...
, Ulysses Bay, Nakhodka Bay
Nakhodka Bay
Nakhodka Bay or Nakhodka Gulf is a bay of the Peter the Great Gulf of the Sea of Japan, on which is sited the port of Nakhodka. It is part of the Primorsky Krai of Russia. The Lisy Island protects the bay from open sea waves...
, Possiet Bay, and the Shamora
Shamora
Lazurnaya Bay - part of the Ussuri Bay of the Sea of Japan. Shamora is a Chinese and traditional Russian name. The Chinese name translates as "sandy desert", referring to the sandy beaches that attract scores of holiday-makers from Vladivostok and other towns of the Russian Far East. Several rest...
, with its fine sandy beaches. The islands include the Rimsky-Korsakov Archipelago
Rimsky-Korsakov Archipelago
Rimsky-Korsakov Archipelago is a group of six small islands and few kekurs in Peter the Great Gulf of Sea of Japan under administration of Khasansky District. Islands are located approximately to southwest of Vladivostok....
, Askold Island, Putyatin Island
Putyatin Island
Putyatin Island is an island in Strelok Bay , near 50 km east of Vladivostok and 35 km west of Nakhodka. It named after admiral Yevfimy Putyatin. An island is under Fokino city administration....
, Eugénie de Montijo Archipelago
Eugénie de Montijo Archipelago
Eugénie de Montijo Archipelago is a group of islands, islets and kekurs in the Peter the Great Gulf, Sea of Japan to south of Vladivostok and north-east of Rimsky-Korsakov Archipelago....
(Popov Island, Shkot Island
Shkot Island
Shkot Island is a one of five big islands of Eugénie de Montijo Archipelago under Vladivostok administration....
, Reyneke Island
Reyneke Island
Reyneke Island is an island in Peter the Great Gulf in 25 km to the south of Zolotoy Rog. It is a part of Eugénie de Montijo Archipelago....
and Russky Island
Russky Island
Russky Island is a Russian island off Vladivostok, in the Peter the Great Gulf, Sea of Japan. It is located about 9,334 kilometres east of Moscow. The Eastern Bosphorus separates the island from the Muravyov-Amursky Peninsula....
, separated from the mainland by the Eastern Bosphorus
Eastern Bosphorus
Eastern Bosphorus is a strait that separates the Muravyov-Amursky Peninsula and Russky Island, and connects Amur Bay and Ussuri Bay.The depth is up to 50 m...
).

About 630 km² of the gulf area are protected as the Far Eastern Marine Nature Reserve. A sailing regatta
Regatta
A regatta is a series of boat races. The term typically describes racing events of rowed or sailed water craft, although some powerboat race series are also called regattas...
that annually takes place in the gulf, is known as the Cup of the Peter the Great Gulf. In winter the northern bays are normally sealed by ice.
The source of this article is wikipedia, the free encyclopedia.  The text of this article is licensed under the GFDL.