Encyclopedia
The Treaty of Küçük Kaynarca (also spelled Kuchuk Kainarji) was signed on 21 July 1774, in Küçük Kaynarca (Malka-Kajnardža, Малка-Кайнарджа), Dobruja
Dobruja
Dobruja is a historical region shared by Bulgaria and Romania, located between the lower Danube river and the Black Sea, including the Danube Delta, Romanian coast and the northernmost part of the Bulgarian coast...
(today Kaynardzha
Kaynardzha
Kaynardzha is a village in northeastern Bulgaria, part of Silistra Province. It is the administrative centre of Kaynardzha Municipality, which lies in the easternmost part of Silistra Province, in the historical region of Southern Dobruja, close to the Romanian border.The village is famous for...
, Silistra Province
Silistra Province
Silistra Province is a province of Bulgaria, named after its main city - Silistra. It is divided into 7 municipalities with a total population, as of December 2009, of 127,659 inhabitants....
, Bulgaria
Bulgaria
Bulgaria , officially the Republic of Bulgaria , is a parliamentary democracy within a unitary constitutional republic in Southeast Europe. The country borders Romania to the north, Serbia and Macedonia to the west, Greece and Turkey to the south, as well as the Black Sea to the east...
) between the Russian Empire
Russian Empire
The Russian Empire was a state that existed from 1721 until the Russian Revolution of 1917. It was the successor to the Tsardom of Russia and the predecessor of the Soviet Union...
(represented by Field-Marshal Romyantsev
Pyotr Rumyantsev
Count Pyotr Alexandrovich Rumyantsev-Zadunaisky was one of the foremost Russian generals of the 18th century. He governed Little Russia in the name of Empress Catherine the Great from the abolition of the Cossack Hetmanate in 1764 until Catherine's death 32 years later...
) and the Ottoman Empire
Ottoman Empire
The Ottoman EmpireIt was usually referred to as the "Ottoman Empire", the "Turkish Empire", the "Ottoman Caliphate" or more commonly "Turkey" by its contemporaries...
(represented by Musul Zade Mehmed Pasha) after the Ottoman Empire was defeated in the Russo-Turkish War of 1768-1774.

Russia returned Wallachia
Wallachia
Wallachia or Walachia is a historical and geographical region of Romania. It is situated north of the Danube and south of the Southern Carpathians...
and Moldavia
Moldavia
Moldavia is a geographic and historical region and former principality in Eastern Europe, corresponding to the territory between the Eastern Carpathians and the Dniester river...
to the Ottoman Empire, but was given the right to protect Christians in the Ottoman Empire, and to intervene in Wallachia and Moldavia in case of Ottoman misrule. The Crimea was declared independent, but the sultan remained the religious leader of the Tatars as the Muslim caliph. This was the first time the powers of the Ottoman caliph were exercised outside of Ottoman borders and ratified by a European power. Russia gained Kabardia in the Caucasus, unlimited sovereignty over the port of Azov, the ports of Kerch
Kerch
Kerch is a city on the Kerch Peninsula of eastern Crimea, an important industrial, transport and tourist centre of Ukraine. Kerch, founded 2600 years ago, is considered as one of the most ancient cities in Ukraine.-Ancient times:...
and Enikale in the Kerch peninsula in the Crimea, and part of the Yedisan
Yedisan
Yedisan is a historical region in modern southwestern Ukraine and southeastern Moldova . The region lies to the north of the Black Sea between the Dniester and Dnieper rivers...
region between the Bug and Dnieper rivers at the mouth of the Dnieper. This latter territory included the port of Kherson
Kherson
Kherson is a city in southern Ukraine. It is the administrative center of the Kherson Oblast , and is designated as its own separate raion within the oblast. Kherson is an important port on the Black Sea and Dnieper River, and the home of a major ship-building industry...
. Russia thus gained two outlets to the Black Sea, which was no longer an Ottoman lake. Restrictions imposed by the 1739 Treaty of Niš over Russian access to the Azov Sea and fortifying the area were removed. Russian merchant vessels were to be allowed passage of the Dardanelles. The treaty also granted Eastern Orthodox Christians
Eastern Orthodox Church
The Orthodox Church, officially called the Orthodox Catholic Church and commonly referred to as the Eastern Orthodox Church, is the second largest Christian denomination in the world, with an estimated 300 million adherents mainly in the countries of Belarus, Bulgaria, Cyprus, Georgia, Greece,...
the right to sail under the Russian flag
Flag of Russia
The flag of Russia is a tricolour flag of three equal horizontal fields, white on the top, blue in the middle and red on the bottom. The flag was first used as an ensign for Russian merchant and war ships and only became official in 1896...
and provided for the building of a Russian Orthodox Church
Russian Orthodox Church
The Russian Orthodox Church or, alternatively, the Moscow Patriarchate The ROC is often said to be the largest of the Eastern Orthodox churches in the world; including all the autocephalous churches under its umbrella, its adherents number over 150 million worldwide—about half of the 300 million...
in Constantinople
Constantinople
Constantinople was the capital of the Roman, Eastern Roman, Byzantine, Latin, and Ottoman Empires. Throughout most of the Middle Ages, Constantinople was Europe's largest and wealthiest city.-Names:...
(which was never built).

The treaty was a most humiliating blow to the once-mighty Ottoman realm. 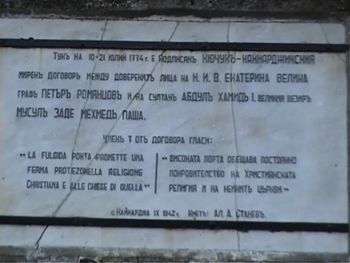 The Crimean Khanate, while nominally independent, was dependent on Russia and was formally annexed into the Russian Empire in 1783. Russia interpreted the treaty as giving them the right to protect Orthodox Christians in the Empire, notably using this prerogative in the Danubian Principalities
Danubian Principalities
Danubian Principalities was a conventional name given to the Principalities of Moldavia and Wallachia, which emerged in the early 14th century. The term was coined in the Habsburg Monarchy after the Treaty of Küçük Kaynarca in order to designate an area on the lower Danube with a common...
(Moldavia
Moldavia
Moldavia is a geographic and historical region and former principality in Eastern Europe, corresponding to the territory between the Eastern Carpathians and the Dniester river...
and Wallachia
Wallachia
Wallachia or Walachia is a historical and geographical region of Romania. It is situated north of the Danube and south of the Southern Carpathians...
) to intervene during the last Phanariote rules and after the Greek War of Independence
Greek War of Independence
The Greek War of Independence, also known as the Greek Revolution was a successful war of independence waged by the Greek revolutionaries between...
.