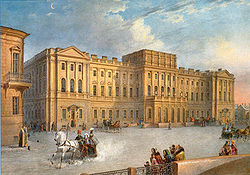 The State Council
State Council
State Council may refer to:In politics:* State Council of the Soviet Union, was the chief administrative authority of the Union of Soviet Socialist Republics...
("Государственный Совет") was the supreme state advisory body to the Tsar
Tsar
Tsar is a title used to designate certain European Slavic monarchs or supreme rulers. As a system of government in the Tsardom of Russia and Russian Empire, it is known as Tsarist autocracy, or Tsarism...
in Imperial Russia
Russian Empire
The Russian Empire was a state that existed from 1721 until the Russian Revolution of 1917. It was the successor to the Tsardom of Russia and the predecessor of the Soviet Union...
.

Early Tsars' Councils were small and dealt primarily with the external politics
Foreign policy
A country's foreign policy, also called the foreign relations policy, consists of self-interest strategies chosen by the state to safeguard its national interests and to achieve its goals within international relations milieu. The approaches are strategically employed to interact with other countries...
.

Peter I of Russia
Peter I of Russia
Peter the Great, Peter I or Pyotr Alexeyevich Romanov Dates indicated by the letters "O.S." are Old Style. All other dates in this article are New Style. ruled the Tsardom of Russia and later the Russian Empire from until his death, jointly ruling before 1696 with his half-brother, Ivan V...
introduced the Secret Council. Catherine I of Russia
Catherine I of Russia
Catherine I , the second wife of Peter the Great, reigned as Empress of Russia from 1725 until her death.-Life as a peasant woman:The life of Catherine I was said by Voltaire to be nearly as extraordinary as that of Peter the Great himself. There are no documents that confirm her origins. Born on...
introduced the Supreme Secret Council. Its role varied during different reigns.

Peter III of Russia
Peter III of Russia
Peter III was Emperor of Russia for six months in 1762. He was very pro-Prussian, which made him an unpopular leader. He was supposedly assassinated as a result of a conspiracy led by his wife, who succeeded him to the throne as Catherine II.-Early life and character:Peter was born in Kiel, in...
created the Imperial Council on May 20, 1762 ("Императорский Совет"), or, formally "The Council at the Highest Court" ("Совет при высочайшем дворе"). It was dismissed shortly after the succession of Catherine II of Russia
Catherine II of Russia
Catherine II, also known as Catherine the Great , Empress of Russia, was born in Stettin, Pomerania, Prussia on as Sophie Friederike Auguste von Anhalt-Zerbst-Dornburg...
. The State Council ceased to exist after the February Revolution
February Revolution
The February Revolution of 1917 was the first of two revolutions in Russia in 1917. Centered around the then capital Petrograd in March . Its immediate result was the abdication of Tsar Nicholas II, the end of the Romanov dynasty, and the end of the Russian Empire...
of 1917.

The State Council was established by Alexander I of Russia
Alexander I of Russia
Alexander I of Russia , served as Emperor of Russia from 23 March 1801 to 1 December 1825 and the first Russian King of Poland from 1815 to 1825. He was also the first Russian Grand Duke of Finland and Lithuania....
in 1810 as part of Speransky's reforms
Government reform of Alexander I
The early Russian system of government instituted by Peter the Great, which consisted of various state committees, each named Collegium with subordinate departments named Prikaz, was largely outdated by the 19th century...
. Although envisaged by Speransky as the upper chamber of the Russian parliament
Parliament
A parliament is a legislature, especially in those countries whose system of government is based on the Westminster system modeled after that of the United Kingdom. The name is derived from the French , the action of parler : a parlement is a discussion. The term came to mean a meeting at which...
, it was actually an advisory legislative body composed of people whom the tsar could trust. The number of members varied at different periods. Upon its establishment in 1810 there were 35 members; in 1890 there were 60. The main duty of the Council was the preliminary investigation, promulgation and abrogation of laws.

There were four departments of the Council: Legislative; Civil and Ecclesiastical Administration; State Economy; and Industry, Science and Commerce. Each department had its own presiding officer (State Secretary) and met separately to discuss matters assigned to their departments. There were also plenary sessions of the whole Council presided over by the Chairman of the State Council.

The Council as a whole examined projects of law proposed by the ministers who were ex-officio members. The majority of their sessions concerned the budget and state expenditures but they would examine anything submitted to them. They had no authority to propose changes to the law, to examine anything that was not submitted to them for examination or decision making authority. The Council only made recommendations to the monarch who could support the majority, minority or disregard the Council's recommendations completely as they saw fit.

During 1906-1917, the status of the State Council was defined by the Russian Constitution of 1906
Russian Constitution of 1906
The Russian Constitution of 1906 refers to a major revision of the 1832 Fundamental Laws of the Russian Empire, which transformed the formerly absolutist state into one in which the emperor agreed for the first time to share his autocratic power with a parliament. It was enacted on April 23, 1906,...
. Its chairman was appointed by the Tsar
Tsar
Tsar is a title used to designate certain European Slavic monarchs or supreme rulers. As a system of government in the Tsardom of Russia and Russian Empire, it is known as Tsarist autocracy, or Tsarism...
. Half of its members were appointed by the Tsar from persons distinguished at civil and military service, and half by elections from various categories of society, separately:

Sources:
Out of My Past: Memoirs of Count Kokovstsov; Hoover War Library Publications Number 6, Stanford University Press, 1935
The source of this article is wikipedia, the free encyclopedia.  The text of this article is licensed under the GFDL.