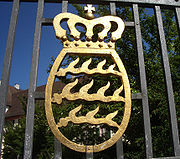 This is a list of the rulers of the German state of Württemberg
Württemberg
Württemberg , formerly known as Wirtemberg or Wurtemberg, is an area and a former state in southwestern Germany, including parts of the regions Swabia and Franconia....
, originally a county and eventually a kingdom until the ruling dynasty was overthrown in 1918.


Counts of Württemberg to 1495

The Treaty of Nürtingen
Treaty of Nürtingen
The Treaty of Nürtingen was a treaty in German history, signed on 25 January 1442. It divided the county of Württemberg between count Ludwig I and his brother count Ulrich V. The Stuttgart half went to Ulrich and included the cities of Cannstatt, Göppingen, Marbach, Neuffen, Nürtingen, Schorndorf...
divided the County of Württemberg into two separate lines. Württemberg-Stuttgart with the capital Stuttgart
Stuttgart
Stuttgart is the capital of the state of Baden-Württemberg in southern Germany. The sixth-largest city in Germany, Stuttgart has a population of 600,038 while the metropolitan area has a population of 5.3 million ....
and Württemberg-Urach with the capital Urach
Bad Urach
Bad Urach is a town in the district of Reutlingen, Baden-Württemberg, Germany. It is situated 14 km east of Reutlingen, at the foot of the Swabian Alb, and is known for its spa and therapeutic bath.-History:...
. 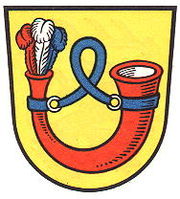 The Holy Roman Empire came to an end in 1806. The Elector of Württemberg, allied to Napoleon I
Napoleon I
Napoleon Bonaparte was a French military and political leader during the latter stages of the French Revolution.As Napoleon I, he was Emperor of the French from 1804 to 1815...
, anticipated its dissolution by becoming the ruler of an independent Kingdom of Württemberg in 1806.

Because of a lack of male heirs under Salic law
Salic law
Salic law was a body of traditional law codified for governing the Salian Franks in the early Middle Ages during the reign of King Clovis I in the 6th century...
, on the death of Wilhelm II in 1921 the royal house had to reach back to the descendants of Friedrich II Eugen (ruled 1795–97). The line of the Duke of Urach
Duke of Urach
The title Duke of Urach was created in the Kingdom of Württemberg for Friedrich Wilhelm Alexander Ferdinand, Count of Württemberg on 28 March 1867, with the style of HSH."Urach" is pronounced Oo-raakh -Family:...
was excluded because of a morganatic marriage back in 1800 by its forbear Duke William
Duke William Frederick Philip of Württemberg
William Frederick Philip, Duke of Württemberg was a prince of the House of Württemberg and a minister for war.-Early life:...
, and so the succession devolved to the younger branch of Altshausen
Altshausen
Altshausen is a small Swabian municipality near Ravensburg, Baden-Württemberg, southern Germany.- Geography :Altshausen is situated in Upper Swabia, about 40 kilometers north of Lake Constance...
.


Heads of the House of Württemberg since 1918

The legal line of succession of the house of Württemberg has continued to the present, although the house no longer plays any political role. For later rulers, see List of Ministers-President of Württemberg.