Encyclopedia
Roskilde University is a Danish
Denmark
Denmark is a Scandinavian country in Northern Europe. The countries of Denmark and Greenland, as well as the Faroe Islands, constitute the Kingdom of Denmark . It is the southernmost of the Nordic countries, southwest of Sweden and south of Norway, and bordered to the south by Germany. Denmark...
public university
Public university
A public university is a university that is predominantly funded by public means through a national or subnational government, as opposed to private universities. A national university may or may not be considered a public university, depending on regions...
founded in 1972 and located in Trekroner in the Eastern part of Roskilde
Roskilde
Roskilde is the main city in Roskilde Municipality, Denmark on the island of Zealand. It is an ancient city, dating from the Viking Age and is a member of the Most Ancient European Towns Network....
. The university awards bachelor
Bachelor
A bachelor is a man above the age of majority who has never been married . Unlike his female counterpart, the spinster, a bachelor may have had children...
and master's degrees as well as Ph.D.
Doctor of Philosophy
Doctor of Philosophy, abbreviated as Ph.D., PhD, D.Phil., or DPhil , in English-speaking countries, is a postgraduate academic degree awarded by universities...
degrees. 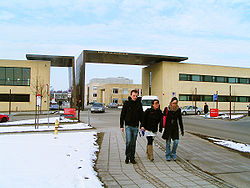 The university was founded in 1972 and was initially intended as an alternative to the traditional Danish universities which had been the scene of several student uprisings in the late 1960s. The students considered the traditional universities undemocratic and controlled by the professors and wanted more influence as well as more flexible teaching methods.

In 2003, the revised Danish university law removed faculty, staff and students from the university decision process, creating a top-down control structure that has been described as absolute monarchy, since leaders are granted extensive powers while being appointed exclusively by higher levels in the organization.

Some notable alumni and professors from RUC include:

In November 2009, the national Danish Working Environment Authority published a report about the working environments at the Institute for Communication stating that "the university's combination of large work responsibilities and time pressure risks influencing the physical and psychological health of the employees in the short and long term". The Working Environment Authority has ordered Roskilde University to develop a plan for solving these problems.