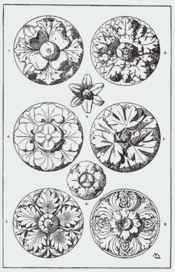 A rosette is a round, stylized flower design, used extensively in sculptural objects from antiquity
Ancient history
Ancient history is the study of the written past from the beginning of recorded human history to the Early Middle Ages. The span of recorded history is roughly 5,000 years, with Cuneiform script, the oldest discovered form of coherent writing, from the protoliterate period around the 30th century BC...
. Appearing in Mesopotamia
Mesopotamia
Mesopotamia is a toponym for the area of the Tigris–Euphrates river system, largely corresponding to modern-day Iraq, northeastern Syria, southeastern Turkey and southwestern Iran.Widely considered to be the cradle of civilization, Bronze Age Mesopotamia included Sumer and the...
and used to decorate the funeral stele
Stele
A stele , also stela , is a stone or wooden slab, generally taller than it is wide, erected for funerals or commemorative purposes, most usually decorated with the names and titles of the deceased or living — inscribed, carved in relief , or painted onto the slab...
in Ancient Greece
Ancient Greek
Ancient Greek is the stage of the Greek language in the periods spanning the times c. 9th–6th centuries BC, , c. 5th–4th centuries BC , and the c. 3rd century BC – 6th century AD of ancient Greece and the ancient world; being predated in the 2nd millennium BC by Mycenaean Greek...
. Adopted later in Romaneseque
Romanesque architecture
Romanesque architecture is an architectural style of Medieval Europe characterised by semi-circular arches. There is no consensus for the beginning date of the Romanesque architecture, with proposals ranging from the 6th to the 10th century. It developed in the 12th century into the Gothic style,...
and Renaissance
Renaissance architecture
Renaissance architecture is the architecture of the period between the early 15th and early 17th centuries in different regions of Europe, demonstrating a conscious revival and development of certain elements of ancient Greek and Roman thought and material culture. Stylistically, Renaissance...
, and also common in the art of Central Asia
Central Asia
Central Asia is a core region of the Asian continent from the Caspian Sea in the west, China in the east, Afghanistan in the south, and Russia in the north...
, spreading as far as India where it is used as a decorative motif in Greco-Buddhist art
Greco-Buddhist art
Greco-Buddhist art is the artistic manifestation of Greco-Buddhism, a cultural syncretism between the Classical Greek culture and Buddhism, which developed over a period of close to 1000 years in Central Asia, between the conquests of Alexander the Great in the 4th century BCE, and the Islamic...
.

The rosette derives from the natural shape of a rosette
Rosette (botany)
In botany, a rosette is a circular arrangement of leaves, with all the leaves at a single height.Though rosettes usually sit near the soil, their structure is an example of a modified stem.-Function:...
in botany, formed by leaves radiating out from the stem of a plant and visible even after the flowers have withered. The formalised flower motif
Motif (art)
In art, a motif is an element of a pattern, an image or part of one, or a theme. A motif may be repeated in a design or composition, often many times, or may just occur once in a work. A motif may be an element in the iconography of a particular subject or type of subject that is seen in other...
is often in carved in stone or wood to create decorative ornaments
Ornament (architecture)
In architecture and decorative art, ornament is a decoration used to embellish parts of a building or object. Large figurative elements such as monumental sculpture and their equivalents in decorative art are excluded from the term; most ornament does not include human figures, and if present they...
for architecture and furniture. A common motif in metalworking
Metalworking
Metalworking is the process of working with metals to create individual parts, assemblies, or large scale structures. The term covers a wide range of work from large ships and bridges to precise engine parts and delicate jewelry. It therefore includes a correspondingly wide range of skills,...
, jewelry design and the applied arts at the intersection of two materials, or to form a decorative border.

Rosette decorations
Rosette (decoration)
A rosette is a small, circular device that is presented with a medal. The rosettes are primarily for situations where wearing the medal is deemed inappropriate. Rosettes are issued in nations such as France, Italy and Japan...
have been used for formal military awards
Military decoration
A military decoration is a decoration given to military personnel or units for heroism in battle or distinguished service. They are designed to be worn on military uniform....
. They are also used to decorate musical insturments, such as around the perimeter of sound holes of guitars
Guitar
The guitar is a plucked string instrument, usually played with fingers or a pick. The guitar consists of a body with a rigid neck to which the strings, generally six in number, are attached. Guitars are traditionally constructed of various woods and strung with animal gut or, more recently, with...
.

One of the earliest appearances of the rosette in ancient art is in early fourth millennium BC Egypt
Egypt
Egypt , officially the Arab Republic of Egypt, Arabic: , is a country mainly in North Africa, with the Sinai Peninsula forming a land bridge in Southwest Asia. Egypt is thus a transcontinental country, and a major power in Africa, the Mediterranean Basin, the Middle East and the Muslim world...
. Another early Mediterranean occurrence of the rosette design derives from Minoan
Minoan civilization
The Minoan civilization was a Bronze Age civilization that arose on the island of Crete and flourished from approximately the 27th century BC to the 15th century BC. It was rediscovered at the beginning of the 20th century through the work of the British archaeologist Arthur Evans...
Crete
Crete
Crete is the largest and most populous of the Greek islands, the fifth largest island in the Mediterranean Sea, and one of the thirteen administrative regions of Greece. It forms a significant part of the economy and cultural heritage of Greece while retaining its own local cultural traits...
; for example, the rosette design has been found on the famed Phaistos Disc
Phaistos Disc
The Phaistos Disc is a disk of fired clay from the Minoan palace of Phaistos on the Greek island of Crete, possibly dating to the middle or late Minoan Bronze Age . It is about 15 cm in diameter and covered on both sides with a spiral of stamped symbols...
, recovered from the Phaistos
Phaistos
Phaistos , also transliterated as Phaestos, Festos and Phaestus is an ancient city on the island of Crete. Phaistos was located in the south-central portion of the island, about 5.6 kilometres from the Mediterranean Sea. It was inhabited from about 4000 BC. A palace, dating from the Middle Bronze...
archaeological site in southern Crete. 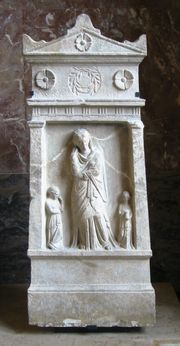 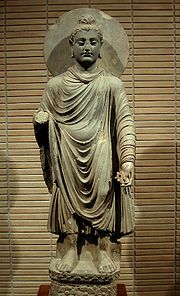