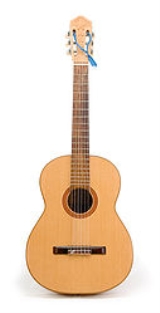 Overview
The guitar is a plucked string instrument
Plucked string instrument
Plucked string instruments are a subcategory of string instruments that are played by plucking the strings. Plucking is a way of pulling and releasing the string in such as way as to give it an impulse that causes the string to vibrate...
, usually played with fingers or a pick
Guitar pick
A guitar pick is a plectrum used for guitars. A pick is generally made of one uniform material; examples include plastic, nylon, rubber, felt, tortoiseshell, wood, metal, glass, and stone...
. The guitar consists of a body with a rigid neck to which the strings, generally six in number, are attached. Guitars are traditionally constructed of various woods and strung with animal gut or, more recently, with either nylon or steel strings. Some modern guitars are made of polycarbonate
Polycarbonate
PolycarbonatePhysical PropertiesDensity 1.20–1.22 g/cm3Abbe number 34.0Refractive index 1.584–1.586FlammabilityV0-V2Limiting oxygen index25–27%Water absorption – Equilibrium0.16–0.35%Water absorption – over 24 hours0.1%...
materials. Guitars are made and repaired by luthier
Luthier
A luthier is someone who makes or repairs lutes and other string instruments. In the United States, the term is used interchangeably with a term for the specialty of each maker, such as violinmaker, guitar maker, lute maker, etc...
s. There are two primary families of guitars: acoustic and electric.

Acoustic guitar
Acoustic guitar
An acoustic guitar is a guitar that uses only an acoustic sound board. The air in this cavity resonates with the vibrational modes of the string and at low frequencies, which depend on the size of the box, the chamber acts like a Helmholtz resonator, increasing or decreasing the volume of the sound...
s (and similar instruments) with hollow bodies have been in use for over a thousand years.

When i play the lower strings 'open' on my guitar, there is a slight buzz or vibration sound coming from the sound hole,inside the body. the guitar ...
More
x