Encyclopedia
The Rolls-Royce armoured car was a British
United Kingdom
The United Kingdom of Great Britain and Northern IrelandIn the United Kingdom and Dependencies, other languages have been officially recognised as legitimate autochthonous languages under the European Charter for Regional or Minority Languages...
armoured car developed in 1914 and used in World War I
World War I
World War I , which was predominantly called the World War or the Great War from its occurrence until 1939, and the First World War or World War I thereafter, was a major war centred in Europe that began on 28 July 1914 and lasted until 11 November 1918...
and in the early part of World War II
World War II
World War II, or the Second World War , was a global conflict lasting from 1939 to 1945, involving most of the world's nations—including all of the great powers—eventually forming two opposing military alliances: the Allies and the Axis...
.

The Royal Naval Air Service
Royal Naval Air Service
The Royal Naval Air Service or RNAS was the air arm of the Royal Navy until near the end of the First World War, when it merged with the British Army's Royal Flying Corps to form a new service , the Royal Air Force...
(RNAS) raised the first British armoured car squadron during the First World War. In September 1914 all available Rolls Royce
Rolls-Royce Limited
Rolls-Royce Limited was a renowned British car and, from 1914 on, aero-engine manufacturing company founded by Charles Stewart Rolls and Henry Royce on 15 March 1906 as the result of a partnership formed in 1904....
Silver Ghost
Rolls-Royce Silver Ghost
The Rolls-Royce Silver Ghost refers both to a car model and to one specific car from that series.Originally named the "40/50 h.p." the chassis was originally produced at Royce's Manchester works, before moving to Derby in July 1908 and also, between 1921 and 1926, in Springfield, Massachusetts....
chassis were requisitioned to form the basis for the new armoured car. The following month a special committee of the Admiralty
Admiralty
The Admiralty was formerly the authority in the Kingdom of England, and later in the United Kingdom, responsible for the command of the Royal Navy...
Air Department
Air Department
The Air Department of the British Admiralty was established prior to World War I by Winston Churchill. Its function was to foster naval aviation developments and later to oversee the Royal Naval Air Service . Its first director was Captain Murray Sueter...
, among whom was Flight Commander T.G. Hetherington, designed the superstructure which consisted of armoured bodywork and a single turret
Turret
In architecture, a turret is a small tower that projects vertically from the wall of a building such as a medieval castle. Turrets were used to provide a projecting defensive position allowing covering fire to the adjacent wall in the days of military fortification...
for a Vickers machine gun
Vickers machine gun
Not to be confused with the Vickers light machine gunThe Vickers machine gun or Vickers gun is a name primarily used to refer to the water-cooled .303 inch machine gun produced by Vickers Limited, originally for the British Army...
.

The first three vehicles were delivered on 3 December 1914, although by then the mobile period on the Western Front
Western Front (World War I)
Following the outbreak of World War I in 1914, the German Army opened the Western Front by first invading Luxembourg and Belgium, then gaining military control of important industrial regions in France. The tide of the advance was dramatically turned with the Battle of the Marne...
, where the primitive predecessors of the Rolls-Royce cars had served, had already come to an end. Later in the war they served on several fronts of the Middle Eastern theatre
Middle Eastern theatre of World War I
The Middle Eastern theatre of World War I was the scene of action between 29 October 1914, and 30 October 1918. The combatants were the Ottoman Empire, with some assistance from the other Central Powers, and primarily the British and the Russians among the Allies of World War I...
. Chassis production was suspended in 1917 to enable Rolls-Royce to concentrate on aero engines.

The vehicle was modernized in 1920 and in 1924, resulting in the Rolls-Royce 1920 Pattern and Rolls-Royce 1924 Pattern. In 1940, 34 vehicles which served in Egypt
Egypt
Egypt , officially the Arab Republic of Egypt, Arabic: , is a country mainly in North Africa, with the Sinai Peninsula forming a land bridge in Southwest Asia. Egypt is thus a transcontinental country, and a major power in Africa, the Mediterranean Basin, the Middle East and the Muslim world...
with the 11th Hussars
11th Hussars
The 11th Hussars was a cavalry regiment of the British Army.-History:The regiment was founded in 1715 as Colonel Philip Honeywood's Regiment of Dragoons and was known by the name of its Colonel until 1751 when it became the 11th Regiment of Dragoons...
regiment had the "old" turret replaced with an open-topped unit carrying a Boys anti-tank rifle
Rifle, Anti-Tank, .55 in, Boys
The Rifle, Anti-Tank, .55in, Boys commonly known as the "Boys Anti-tank Rifle" , was a British anti-tank rifle in use during World War II....
, .303 inch Bren
Bren
The Bren, usually called the Bren Gun, was a series of light machine guns adopted by Britain in the 1930s and used in various roles until 1991...
machine gun and smoke grenade launchers.

Some vehicles in Egypt received new chassis from a Fordson truck and became known as Fordson Armoured Cars. Pictures http://ww2photo.mimerswell.com/tanks/gb/bil/ford/fordson.htm show them as equipped with what appears to be turrets fitted with a Boys ATR, a machine gun and twin light machine guns for anti-aircraft defence. 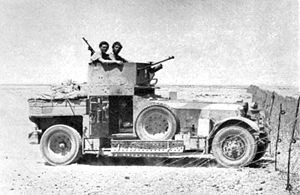 Six RNAS Rolls-Royce squadrons were formed of 12 vehicles each: one went to France; one to Africa to fight in the German colonies and in April 1915 two went to Gallipoli
Battle of Gallipoli
The Gallipoli Campaign, also known as the Dardanelles Campaign or the Battle of Gallipoli, took place at the peninsula of Gallipoli in the Ottoman Empire between 25 April 1915 and 9 January 1916, during the First World War...
. From August 1915 onwards these were all disbanded and the materiel
Materiel
Materiel is a term used in English to refer to the equipment and supplies in military and commercial supply chain management....
handed over to the Army which used them in the Light Armoured Motor Batteries of the Machine Gun Corps
Machine Gun Corps
The Machine Gun Corps was a corps of the British Army, formed in October 1915 in response to the need for more effective use of machine guns on the Western Front in World War I. The Heavy Branch of the MGC was the first to use tanks in combat, and the branch was subsequently turned into the Tank...
.The armoured cars were poorly suited to the muddy trench
Trench warfare
Trench warfare is a form of occupied fighting lines, consisting largely of trenches, in which troops are largely immune to the enemy's small arms fire and are substantially sheltered from artillery...
filled battlefields of the Western Front
Western Front (World War I)
Following the outbreak of World War I in 1914, the German Army opened the Western Front by first invading Luxembourg and Belgium, then gaining military control of important industrial regions in France. The tide of the advance was dramatically turned with the Battle of the Marne...
, but were able to operate in the Near East
Near East
The Near East is a geographical term that covers different countries for geographers, archeologists, and historians, on the one hand, and for political scientists, economists, and journalists, on the other...
, so the squadron from France went to Egypt.

Lawrence of Arabia used a squadron in his operations against the Turkish forces. He called the unit of nine armoured Rolls-Royces "more valuable than rubies" in helping win his Revolt in the Desert. This impression would last with him the rest of his life; when asked by a journalist what he thought would be the thing he would most value he said "I should like my own Rolls-Royce car with enough tyres and petrol to last me all my life".

In the Irish Civil War
Irish Civil War
The Irish Civil War was a conflict that accompanied the establishment of the Irish Free State as an entity independent from the United Kingdom within the British Empire....
(1922–1923), 13 Rolls-Royce armoured cars were given to the Irish Free State
Irish Free State
The Irish Free State was the state established as a Dominion on 6 December 1922 under the Anglo-Irish Treaty, signed by the British government and Irish representatives exactly twelve months beforehand...
government by the British government to fight the Irish Republican Army
Irish Republican Army (1922–1969)
The original Irish Republican Army fought a guerrilla war against British rule in Ireland in the Irish War of Independence 1919–1921. Following the signing of the Anglo-Irish Treaty on 6 December 1921, the IRA in the 26 counties that were to become the Irish Free State split between supporters and...
. They were a major advantage to the Free State in street fighting and in protecting convoys against guerrilla attacks and were instrumental in the retaking of the cities of Cork and Waterford. Incredibly, despite continued maintenance problems and poor reaction to Irish weather, they continued in service until 1944, being withdrawn once new tyres became unobtainable. 12 of the Irish Army
Irish Army
The Irish Army, officially named simply the Army is the main branch of the Defence Forces of Ireland. Approximately 8,500 men and women serve in the Irish Army, divided into three infantry Brigades...
examples were stripped and sold in 1954. One, ARR-2, Sliabh na mBan, was retained by the army and is generally accepted to be the car that was accompanying IRA Leader Michael Collins
Michael Collins (Irish leader)
Michael "Mick" Collins was an Irish revolutionary leader, Minister for Finance and Teachta Dála for Cork South in the First Dáil of 1919, Director of Intelligence for the IRA, and member of the Irish delegation during the Anglo-Irish Treaty negotiations. Subsequently, he was both Chairman of the...
on the day he was killed. This is one of only two still running today, and is regularly aired during parades and open days, often driving under its own power. It is maintained by the Army Logistics Corps in the Curragh Camp. One of the 12 sold (ARR-1 Danny Boy/Tom Keogh) survives with a collector in England.

At the outbreak of World War II, 76 vehicles were in service. They were used in operations in the Western Desert
Western Desert Campaign
The Western Desert Campaign, also known as the Desert War, was the initial stage of the North African Campaign during the Second World War. The campaign was heavily influenced by the availability of supplies and transport. The ability of the Allied forces, operating from besieged Malta, to...
, in Iraq
Anglo-Iraqi War
The Anglo-Iraqi War was the name of the British campaign against the rebel government of Rashid Ali in the Kingdom of Iraq during the Second World War. The war lasted from 2 May to 31 May 1941. The campaign resulted in the re-occupation of Iraq by British armed forces and the return to power of the...
, and in Syria
Syria-Lebanon campaign
The Syria–Lebanon campaign, also known as Operation Exporter, was the Allied invasion of Vichy French-controlled Syria and Lebanon, in June–July 1941, during World War II. Time Magazine referred to the fighting as a "mixed show" while it was taking place and the campaign remains little known, even...
. By the end of 1941, they were withdrawn from the frontline service as modern armoured car designs became available. Some Indian Pattern cars saw use in the Indian subcontinent
Indian subcontinent
The Indian subcontinent, also Indian Subcontinent, Indo-Pak Subcontinent or South Asian Subcontinent is a region of the Asian continent on the Indian tectonic plate from the Hindu Kush or Hindu Koh, Himalayas and including the Kuen Lun and Karakoram ranges, forming a land mass which extends...
and Burma.

A single experimental vehicle had the turret removed and replaced by a one-pounder automatic anti-aircraft gun on an open mounting. Some cars had Maxim machine guns instead of the Vickers gun.