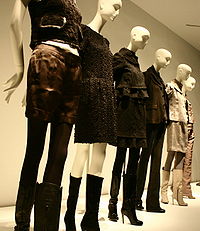 Rochas is a fashion
Fashion design
Fashion design is the art of the application of design and aesthetics or natural beauty to clothing and accessories. Fashion design is influenced by cultural and social latitudes, and has varied over time and place. Fashion designers work in a number of ways in designing clothing and accessories....
, beauty
Cosmetics
Cosmetics are substances used to enhance the appearance or odor of the human body. Cosmetics include skin-care creams, lotions, powders, perfumes, lipsticks, fingernail and toe nail polish, eye and facial makeup, towelettes, permanent waves, colored contact lenses, hair colors, hair sprays and...
, and perfume
Perfume
Perfume is a mixture of fragrant essential oils and/or aroma compounds, fixatives, and solvents used to give the human body, animals, objects, and living spaces "a pleasant scent"...
house founded in 1925 by french designer Marcel Rochas, born in 1902 and died in 1955, first designer of 2/3-length coats and skirts with pockets. It is currently owned by the multinational Procter & Gamble
Procter & Gamble
Procter & Gamble is a Fortune 500 American multinational corporation headquartered in downtown Cincinnati, Ohio and manufactures a wide range of consumer goods....
.

Rochas had been known primarily for its signature perfume, "Femme," which was packaged in a pink box with black lace
Lace
Lace is an openwork fabric, patterned with open holes in the work, made by machine or by hand. The holes can be formed via removal of threads or cloth from a previously woven fabric, but more often open spaces are created as part of the lace fabric. Lace-making is an ancient craft. True lace was...
.

The company found recent recognition for its fashion design
Fashion design
Fashion design is the art of the application of design and aesthetics or natural beauty to clothing and accessories. Fashion design is influenced by cultural and social latitudes, and has varied over time and place. Fashion designers work in a number of ways in designing clothing and accessories....
when it chose Olivier Theyskens
Olivier Theyskens
Olivier Theyskens is a fashion designer who has worked with several major houses, including Rochas, Nina Ricci, and Theory.- Biography :Olivier Theyskens was born to a Belgian chemical engineer and a French homemaker...
as its creative director
Creative Director
A creative director is a position often found within the graphic design, film, music, fashion, advertising, media or entertainment industries, but may be useful in other creative organizations such as web development and software development firms as well....
in 2002. (In the years leading to his appointment, its clothes had not been considered notable.) Theyskens, within his first few months, created an "entirely new silhouette for the house" that was French
France
The French Republic , The French Republic , The French Republic , (commonly known as France , is a unitary semi-presidential republic in Western Europe with several overseas territories and islands located on other continents and in the Indian, Pacific, and Atlantic oceans. Metropolitan France...
-influenced and elegant. His first full collection, for Fall 2003, was praised by style.com as "ravishing" and "nothing short of magnificent."

For the next several years, Rochas continued to garner praise among fashion critics and to attract loyal followers. Rochas' clients included Nicole Kidman
Nicole Kidman
Nicole Mary Kidman, AC is an American-born Australian actress, singer, film producer, spokesmodel, and humanitarian. After starring in a number of small Australian films and TV shows, Kidman's breakthrough was in the 1989 thriller Dead Calm...
, Jennifer Aniston
Jennifer Aniston
Jennifer Joanna Aniston is an American actress, film director, and producer, best known for her role as Rachel Green on the television sitcom Friends, a role which earned her an Emmy Award, a Golden Globe Award, and a Screen Actors Guild Award.Aniston has also enjoyed a successful film career,...
, Kirsten Dunst
Kirsten Dunst
Kirsten Caroline Dunst is an American actress, singer and model. She made her film debut in Oedipus Wrecks, a short film directed by Woody Allen for the anthology New York Stories...
, Kate Bosworth
Kate Bosworth
Catherine Ann "Kate" Bosworth is an American actress. Bosworth starred in the television series Young Americans, in which she played Bella Banks. She became known with a leading role in 2002's Blue Crush. The following year, Bosworth played the teenage girlfriend of porn star John Holmes in...
, Jennifer Lopez
Jennifer Lopez
Jennifer Lynn Lopez is an American actress, singer, record producer, dancer, television personality, and fashion designer. Lopez began her career as a dancer on the television comedy program In Living Color. Subsequently venturing into acting, she gained recognition in the 1995 action-thriller...
, Rachel Weisz
Rachel Weisz
Rachel Hannah Weisz born 7 March 1970)is an English-American film and theatre actress and former fashion model. She started her acting career at Trinity Hall, Cambridge, where she co-founded the theatrical group Cambridge Talking Tongues...
, and Sarah Jessica Parker
Sarah Jessica Parker
Sarah Jessica Parker is an American film, television, and theater actress and producer.She is best known for her leading role as Carrie Bradshaw on the HBO television series Sex and the City , for which she won four Golden Globe Awards, three Screen Actors Guild Awards, and two Emmy Awards...
. In 2006, the Council of Fashion Designers of America
Council of Fashion Designers of America
The Council of Fashion Designers of America, Inc. is a not-for-profit trade association of over 350 of America’s foremost fashion and accessory designers. As of 2009, Diane von Fürstenberg is the group's President and Steven Kolb is the Executive Director...
awarded Theyskens the International Award. However, Theyskens' focus on "demicouture" (special pieces too costly to mass-produce but which may not meet strict couture
Haute couture
Haute couture refers to the creation of exclusive custom-fitted clothing. Haute couture is made to order for a specific customer, and it is usually made from high-quality, expensive fabric and sewn with extreme attention to detail and finished by the most experienced and capable seamstresses,...
rules regarding hand-stitching and numbers of fitting) was questioned by fashion insiders as a viable business strategy. His gowns, some of which were priced upwards of $20,000, were often out of reach for all but the most fabulously wealthy. Theyskens took a purer approach to fashion and did not rely (like many fashion houses) on accessory sales and cheaper sister lines for a steady stream of revenue.

In July 2006, Procter & Gamble announced the discontinuation of Rochas' fashion division, shocking many in the fashion industry. One "longtime designer," commenting anonymously in the New York Times, said of the closure, "That sort of perfect, made-to-measure business can't exist today, which is really too bad. Everything is about business now, and fashion shouldn't have to follow normal economic models—that's not the point. What happened to investing in beauty
Beauty
Beauty is a characteristic of a person, animal, place, object, or idea that provides a perceptual experience of pleasure, meaning, or satisfaction. Beauty is studied as part of aesthetics, sociology, social psychology, and culture...
?"

There are currently plans to reopen the fashion house.

On November 3, 2008, Marco Zanini has been named new artistic director for the fashion house. He will show his first collection during Paris Fashion Week in February 2009.

About half a century separate Marco Zanini from the creator and founder of the house, Marcel Rochas. Born in 1971, Marco Zanini graduated from the Fine Arts Academy of Milan in 1995. after having been Assistant at Dolce&Gabbana for their ready-to-wear line, he became Donatella Versace's right arm. He then relaunched the American brand of Halston and created quit a stir in the fashion world. Rocha conferred the responsibility of its ready-to-wear collections upon him in 2009. His ambition to build "brick by brick" and season after season the foundations of a renewed House of Rochas, his insistence on making each new collection "unpredictable", confirm the renaissance of Rochas in fashion.
The source of this article is wikipedia, the free encyclopedia.  The text of this article is licensed under the GFDL.