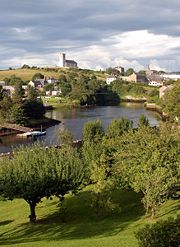 The building of hydroelectric power stations at Cliff (near Belleek
Belleek, County Fermanagh
Belleek is a village in County Fermanagh, Northern Ireland. While the greater part of the village lies within County Fermanagh, part of it crosses the border into County Donegal, a part of Ulster that lies in the Republic of Ireland. This makes Belleek the western-most village in the United Kingdom...
) and Ballyshannon (work began in 1945 and the first power station was commissioned in 1950) caused famous salmon
Salmon
Salmon is the common name for several species of fish in the family Salmonidae. Several other fish in the same family are called trout; the difference is often said to be that salmon migrate and trout are resident, but this distinction does not strictly hold true...
beats to be flooded and the run of salmon into the Erne has now declined to such a tiny trickle as to be of little angling value except for the few fish that are occasionally caught below Cliff when the power station is generating. Roach
Rutilus
Rutilus is a genus of fishes in the family Cyprinidae, commonly called roaches. Locally, the name "roach" without any further qualifiers is also used for particular species, particularly the Common Roach Rutilus (Latin for "shining, red, golden, auburn") is a genus of fishes in the family...
first appeared in the river in 1963 and there was a massive increase in the roach population in 1968. This increase could well have had an adverse effect on trout stocks, which went into decline at that time. Water pollution became a major problem in the 1970s and up to 1987. Since 1987 the pollution problem has been well controlled, the roach population has declined dramatically and trout stocks have made a welcome return and provide good angling once more, both on the Erne itself and its tributaries.

The River Erne is suited to all types of pleasure craft. It is one of the most popular venues in Europe for rental boat vacations. Live aboard pleasure cruisers are available in many locations along the Erne waterway, including Belturbet, Knockniny, Carrybridge, Bellanaleck, Enniskillen
Enniskillen
Enniskillen is a town in County Fermanagh, Northern Ireland. It is located almost exactly in the centre of the county between the Upper and Lower sections of Lough Erne. It had a population of 13,599 in the 2001 Census...
, and Killadeas. In addition to the use of the Erne for live aboard Boating holidays sections of the river are ideal for water skiing, bank fishing, trolling, jet skiing and scuba diving. Boaters are cautioned, by the Original Official Site of the Northern Ireland Tourist Board http://www.geographia.com/northern-ireland/ukifer01.htm , that Upper Lough Erne is a maze of small islands needing careful navigation and waves on Lower Lough Erne can reach "open-sea dimensions". It is believed that in 2009 Donald Attig
Donald Attig
Donald Attig is an inventor, boat designer, entrepreneur, yachtsman and adventurer.-Biography:...
, at 73 years of age, established benchmark records in both endurance challenge and adventure challenge categories as the first person to complete a single handed transit of the entire Erne Navigation in an engineless live aboard pleasure boat. After an official launch by Her Excellency Priscilla Jenna, the ambassador from South Africa, Attig started his engineless transit at the end of navigation marker at Belturbet
Belturbet
Belturbet is a town in County Cavan, Ireland. It is from Cavan town from Dublin city. Belturbet lies on the N3 road. It is from the border with Northern Ireland between the counties of Cavan and Fermanagh and is south of Enniskillen.- History :...
, County Cavan. He completed the engineless transit at the end of navigation marker Belleek
Belleek, County Fermanagh
Belleek is a village in County Fermanagh, Northern Ireland. While the greater part of the village lies within County Fermanagh, part of it crosses the border into County Donegal, a part of Ulster that lies in the Republic of Ireland. This makes Belleek the western-most village in the United Kingdom...
. Previously, in 2007, Mr. Attig and Jack Donovan established similar records by being the first crew to complete a transit of the River Shannon
River Shannon
The River Shannon is the longest river in Ireland at . It divides the west of Ireland from the east and south . County Clare, being west of the Shannon but part of the province of Munster, is the major exception...
Navigation and beyond in an engineless live aboard pleasure boat. In 2008 Donald Attig repeated the 2007 feat single handed.

The Erne waterway is virtually littered with ancient ruins both Christian and Pagan. The sum total comprises a treasure trove for the photographer, historian or anyone interested in Ireland’s roots. Significant ruins can be found at the following locations. Crom Estate
Crom Estate
The Crom Estate is a nature reserve located in the south of County Fermanagh, Northern Ireland, along the shores of Upper Lough Erne. It is one of three estates owned and managed by the National Trust in County Fermanagh, the others being Florence Court and Castle Coole mansions. The estate...
, on the North bank of the Upper Erne channel, Gad Island, near Crom Estate, Devenish Island
Devenish Island
Devenish or Devinish is an island in Lower Lough Erne, County Fermanagh, Northern Ireland. Aligned roughly north–south, it is about one and a quarter miles long and two-thirds of a mile wide. The main place to get a ferry to the island is at Trory Point, just outside Enniskillen.- Features...
, Inismacsaint Island, Davy’s Island, White Island, and Boa Island
Boa Island
Boa Island is an island near the north shore of Lower Lough Erne in County Fermanagh, Northern Ireland. It is 25 kilometres from Enniskillen town....
. Many of these locations can only be reached by boat. Boa Island is the home of one of most interesting pre-Christian statues in Ireland and Inismacsaint has, what is reputed to be, the oldest large stone cross in Ireland. Devenish Island has an excellent historical display centre, adjacent to its most interesting ruins. Rental boats and hire boats abound on the Erne Waterway. There are also some excursion boats servicing the Erne Waterway. The Ordnance Survey of Northern Ireland Activity Map of Lough Erne(Isbn 978-1-905306-26-8) is an excellent source for planning your photographic, boating, or historical research trip to Lough Erne.

The song "Buachaill Ón Éirne" is a famous Irish
Irish language
Irish , also known as Irish Gaelic, is a Goidelic language of the Indo-European language family, originating in Ireland and historically spoken by the Irish people. Irish is now spoken as a first language by a minority of Irish people, as well as being a second language of a larger proportion of...
ballad
Ballad
A ballad is a form of verse, often a narrative set to music. Ballads were particularly characteristic of British and Irish popular poetry and song from the later medieval period until the 19th century and used extensively across Europe and later the Americas, Australia and North Africa. Many...
about a young boy from the Erne area. It has been recorded by such groups as Clannad and The Corrs
The Corrs
The Corrs are an Irish band which combine pop rock with traditional Celtic folk music. The brother and sisters are from Dundalk, Ireland. The group consists of the Corr siblings: Andrea ; Sharon ; Caroline ; and Jim .The Corrs came to international prominence with their performance at the...
.