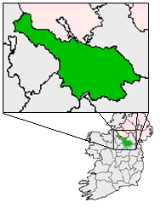 Belturbet location is at one of the best places for crossing the River Erne
River Erne
The River Erne , in the northwest of Ireland, rises in Beaghy Lough, two miles south of Stradone in County Cavan and flows 64 miles through Lough Gowna, Lough Oughter and Upper and Lower Lough Erne, County Fermanagh, to the sea at Ballyshannon, County Donegal...
. When the Anglo-Normans tried to conquer Cavan
Cavan
Cavan is the county town of County Cavan in the Republic of Ireland. The town lies in the north central part of Ireland, near the border with Northern Ireland...
in the early 13th century, Walter de Lacy
Walter de Lacy
Walter de Lacy was Lord of Meath in Ireland and Ludlow in Shropshire in the Welsh Marches.- Life :With his father Hugh de Lacy, Lord of Meath he built Trim Castle , Trim, County Meath....
built a motte-and-bailey
Motte-and-bailey
A motte-and-bailey is a form of castle, with a wooden or stone keep situated on a raised earthwork called a motte, accompanied by an enclosed courtyard, or bailey, surrounded by a protective ditch and palisade...
on Turbot Island. The fort was probably made of wood and it hasn't survived, though the steep mound of earth where it was built is still to be seen.

In the 17th century Belturbet was developed by Stephen Butler, a planter from England. It became an important trading centre, and it also had an English garrison. Many of the original fortifications are in good repair. The town retains much of its original lay-out. The main street leads to the square or 'diamond' where all of the town's important buildings are situated. The parish church dominates the sky-line; some of it dates from the early 17th century, and it was one of the first Anglican churches built in Ireland.

In 1760 John Wesley
John Wesley
John Wesley was a Church of England cleric and Christian theologian. Wesley is largely credited, along with his brother Charles Wesley, as founding the Methodist movement which began when he took to open-air preaching in a similar manner to George Whitefield...
passed through and noted


a town in which there is neither Papist nor Presbyterian; but, to supply that defect, there are Sabbath-breakers, drunkards, and common swearers in abundance.

An award winning documentary on the atrocity, 'The Forgotten bomb' was made by Fran McNulty, it featured interviews with the families and locals who remembered the bombing. The programme was broadcast on Shannonside Northern Sound
Shannonside Northern Sound
Shannonside Northern Sound is a dual radio franchise which operates across counties Cavan, Monaghan , Leitrim, Longford and Roscommon in Ireland. It has a 46.9% market share.- History :...
Radio. The journalist won the best regional journalist award in the ESB media awards in 2004 for the programme. Both parents of Patrick Stanley featured in the documentary. The brother of Geraldine O'Reilly, Anthony, who was serious injured in the attack also featured. A specially sculptured monument was erected in early 2007 on the site of the bomb, dedicated to these two victims.

Cavan County Council have erected a monument to commemorate their deaths at the site of the bombing.

The railway station in Belturbet has recently been restored and is back to its former glory. It was opened on 29 June 1885 for the Great Northern Railway (Ireland)
Great Northern Railway (Ireland)
The Great Northern Railway was an Irish gauge railway company in Ireland.The Great Northern was formed in 1876 by a merger of the Irish North Western Railway , Northern Railway of Ireland, and Ulster Railway. The Ulster Railway was the GNRI's oldest constituent, having opened between Belfast and...
connecting to the broad gauge branch to Ballyhaise
Ballyhaise
-See also:* List of towns and villages in Ireland* List of Market Houses in Ireland...
on the Clones
Clones
Clones is a small town in western County Monaghan, in the 'border area' of the Republic of Ireland. The area is part of the Border Region, earmarked for economic development by the Irish Government due to its currently below-average economic situation...
to Cavan
Cavan
Cavan is the county town of County Cavan in the Republic of Ireland. The town lies in the north central part of Ireland, near the border with Northern Ireland...
line. It also served the narrow gauge Cavan and Leitrim Railway
Cavan and Leitrim Railway
The Cavan & Leitrim Railway was a narrow-gauge railway in the counties of Leitrim and Cavan in the north-west of Ireland, which ran from 1887 until 1959.Unusually for Ireland, this 914mm -gauge line survived on coal traffic, from the mine at Arigna...
to Dromod
Dromod
Dromod is a village in County Leitrim, Ireland. Dromod is a noted fishing village on Loughs Bofin and Boderg, which are threaded by the River Shannon....
and Arigna
Arigna
Arigna is a village in County Roscommon, Ireland. It is near Lough Allen , on a designated "scenic route" between Keadue and Sliabh an Iarainn .-Arigna coal mine:...
, for which it opened on 24 October 1887. The station finally closed for all services on 1 April 1959.
Bus Éireann Expressway Route 309, jointly operated with McGeehan Coaches, provides a frequent service to/from the town many times daily and Ulsterbus Route 5810 from Enniskillen has its terminus in the town. The bus stop is located outside the former post office on the Diamond (for Cavan/Dublin-bound services it is on the opposite side of the road).

The town's main source of revenue is tourism , which includes fishing, boat cruising, the local railway station and country walks. The town has its own festival, Belturbet Festival Of The Erne which also includes the Lady Of the Erne competition. The festival attracts large crowds for the last week in July and boasts one of the largest fancy dress parties in Ireland. Employment for most of the locals is in Cavan
Cavan
Cavan is the county town of County Cavan in the Republic of Ireland. The town lies in the north central part of Ireland, near the border with Northern Ireland...
Town, Ballyconnell
Ballyconnell
Ballyconnell is a town in County Cavan, Ireland. It is situated on the N87 national secondary road at the junction of four townlands Annagh, Cullyleenan, Doon and Derryginny in the parish of Tomregan, Barony of Tullyhaw. The town has an altitude of 55 metres above sea level...
or other nearby areas. There are few sources of employment in the town itself, aside from tourism related jobs. The town has a Farmers Mart every Friday afternoon, where local and fresh produce is sold, and specialities include Cheese, Fish, Breads, Vegetables, etc. There is a Car Boot Sale at the Railway Station on the last Sunday of every month, commencing around 10.30a.m.

Former Dead Can Dance
Dead Can Dance
Dead Can Dance are an ethereal neoclassical duo formed in Melbourne, Australia, in August 1981, by Lisa Gerrard and Brendan Perry. The band relocated to London in May 1982 and disbanded in 1998. Their 1996 album Spiritchaser reached No. 1 on the Billboard Top World Music Albums Chart...
singer and composer Brendan Perry
Brendan Perry
Brendan Michael Perry is a singer and multi-instrumentalist best known for his work as the male half of the duo Dead Can Dance with Lisa Gerrard.-Early life:...
lives in the vicinity of the town.
A Play entitled "The Tangler in Court" written by local Playwright Brendan McCann, and produced by Belturbet Dramatic Society is presented at Belturbet Festival of The Erne during the period July 26 - August 3, 2009.

Belturbet is mentioned in James Joyce
James Joyce
James Augustine Aloysius Joyce was an Irish novelist and poet, considered to be one of the most influential writers in the modernist avant-garde of the early 20th century...
's 1922 novel Ulysses
Ulysses (novel)
Ulysses is a novel by the Irish author James Joyce. It was first serialised in parts in the American journal The Little Review from March 1918 to December 1920, and then published in its entirety by Sylvia Beach on 2 February 1922, in Paris. One of the most important works of Modernist literature,...
, in the fifteenth episode, Circe
Circe
In Greek mythology, Circe is a minor goddess of magic , described in Homer's Odyssey as "The loveliest of all immortals", living on the island of Aeaea, famous for her part in the adventures of Odysseus.By most accounts, Circe was the daughter of Helios, the god of the sun, and Perse, an Oceanid...
. The reference comes from Cissy Caffrey, who says: 'More luck to me. Cavan, Cootehill and Belturbet'.