Encyclopedia
Lough Oughter is a lake, or complex of lakes, in County Cavan
County Cavan
County Cavan is a county in Ireland. It is part of the Border Region and is also located in the province of Ulster. It is named after the town of Cavan. Cavan County Council is the local authority for the county...
covering approximately 8931 hectares. It is on the River Erne
River Erne
The River Erne , in the northwest of Ireland, rises in Beaghy Lough, two miles south of Stradone in County Cavan and flows 64 miles through Lough Gowna, Lough Oughter and Upper and Lower Lough Erne, County Fermanagh, to the sea at Ballyshannon, County Donegal...
, and forms the southern part of the Lough Erne
Lough Erne
Lough Erne, sometimes Loch Erne , is the name of two connected lakes in County Fermanagh, Northern Ireland. The lakes are widened sections of the River Erne. The river begins by flowing north, and then curves west into the Atlantic. The southern lake is further up the river and so is named Upper...
complex. The lakes are bounded roughly by Belturbet
Belturbet
Belturbet is a town in County Cavan, Ireland. It is from Cavan town from Dublin city. Belturbet lies on the N3 road. It is from the border with Northern Ireland between the counties of Cavan and Fermanagh and is south of Enniskillen.- History :...
in the north; Cavan
Cavan
Cavan is the county town of County Cavan in the Republic of Ireland. The town lies in the north central part of Ireland, near the border with Northern Ireland...
Town to the east; Crossdoney
Crossdoney
Crossdoney or Crosdoney is a village in County Cavan on the R154 regional road where it terminates at a junction with the R198. Peculiarly, all buildings in the village sit on one side of the road, and this gives rise to the widely used local expression: "All to one side like...
to the south and Killeshandra
Killeshandra
Killeshandra or Killashandra is a village in County Cavan, Ireland, located 20 km northwest of Cavan town and is central to County Cavan's lakeland and geopark region, set in the unique Erne catchment environment of rivers, lakes, wetlands and woodland...
to the west. 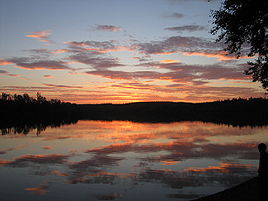 Scientific evaluations consider the Lough Oughter area as a whole as the best inland example of a flooded drumlin landscape in Ireland and has many rich and varied biological communities. Nowhere else in the country does such an intimate mixture of land and water occur over a comparable area, and many of the species of wetland plants, some considered quite commonplace in Lough Oughter and its associated loughs, are infrequent elsewhere. The number of whooper swans which winter in the area represents about 3% of the total European population while the lake also houses the largest concentration of breeding Great Crested Grebes in the Republic, having become almost extinct in the 19th century.

Lough Oughter has long been classed locally as an angling lake and is grossly under valued for its qualities as a potential venue for wildlife eco-tourism and education, is now designated as a suitable wetland for inclusion in the 'Ramsar List of Wetlands of International Importance'. Cavan County Council have stated: "It is recognized nationally and internationally as being of significant values not only for the country, but for humanity as a whole". It should also be noted that the Lough Oughter complex along with Killykeen Forest Park are designated Natura 2000
Natura 2000
Natura 2000 is an ecological network of protected areas in the territory of the European Union.-Origins:In May 1992, the governments of the European Communities adopted legislation designed to protect the most seriously threatened habitats and species across Europe. This legislation is called the...
habitats, Special Areas for Conservation (SAC) and Special Protection Areas (SPA) under EU legislation.

The main threats to the quality of the site, according to scientific sources, are water polluting such as run-off from fertiliser and slurry applications and sewage discharge which have raised the nutrient status of some lakes to hypertrophic. Increased afforestation has resulted in some loss of wetland habitat and also loss of some feeding ground for wintering birds such as Greenland White-fronted Geese.

With their natural beauty and bio-diversity the Lough Oughter complex of lakes and wetlands make an ideal location for sustainable Ecotourism
Ecotourism
Ecotourism is a form of tourism visiting fragile, pristine, and usually protected areas, intended as a low impact and often small scale alternative to standard commercial tourism...
. The income can be significant and support livelihoods, locally and nationally. Wetlands provide other 'services', too, such as water, food, water purification, erosion control, etc., for the benefit of tourists and tourist accommodation. The income generated by tourism for national and local economies in and around wetlands can be substantial: the Broads in the UK supports the equivalent of 3,000 full-time jobs.

Killykeen Forest Park
Killykeen Forest Park
Killykeen Forest Park straddling Lough Oughter is situated in County Cavan, Ireland approximately five miles from Cavan town. Responsibility for the upkeep of Killykeen is through the states commercial forestry service Coillte together with the National Parks and Wildlife Service where Lough...
combines under the semi-government and Swiss bank controlled Coillte as a commercial forestry site which has long been recognised for its interesting history and all seasons recreational qualities, located just five miles from Cavan town and saddles on either side of the Lough Oughter system. Popular with angling visitors and favoured for its walking trails through the leafy glades and along the lake shores. What might be achieved instead with a fully worked out eco-tourism management plan.

Lough Oughter synonymous with the ancient monastic settlement on Trinity Island, once sustained a substantial resident native population around its shores back to the earliest times of settlement with several identified island crannog locations and megalithic wedge tomb structures. With the arrival of the Anglo Normans, who built the impressive Clogh Oughter Castle
Cloughoughter Castle
Cloughoughter Castle is a ruined circular castle, situated on a small island in Lough Oughter, 4 kilometres east of the town of Killeshandra in County Cavan, Ireland.-History:...
which stands on a tiny island in Lough Oughter from the thirteenth century. Circular in construction some 15.5 metres in outside diameter and standing around 18 metres high. The nearest shore is approximately 130 metres away close to the narrowest part of the lough at Inishconnell Rinn Point. Clogh Oughter castle has been at the centre of much of County Cavan's turbulent history and was probably built originally to protect the clan O'Reilly chieftains from their warring neighbours. During the seventeenth century the castle changed hands several times and was one of the last defended castles to hold out during the Confederate Wars. Before this Clogh Oughter castle was used as a prison, notably the Anglican Bishop of Kilmore, William Bedell
William Bedell
William Bedell was an Anglican churchman.-Early life:He was born at Black Notley in Essex, and educated at Emmanuel College, Cambridge, where he was a pupil of William Perkins. He became a fellow of Emmanuel in 1593, and took orders...
was held hostage here and rebel leader Owen Rua O'Neil is reputed to have died here in 1649, having used the castle as a refuge. The rebel army were finally defeated in 1653, after which the lofty walls of Clogh Oughter castle were breached by cannon shot and have remained unoccupied ever since, apart from nesting crows and water fowl.

During the late nineteenth century water levels on Lough Oughter were lowered to alleviate flooding of low lying farmland. However plans are now afoot through Waterways Ireland
Waterways Ireland
Waterways Ireland is one of the six all-Ireland North/South implementation bodies established under the Belfast Agreement in 1999. It is responsible for the management, maintenance, development, and restoration of inland navigable waterways primarily for recreational purposes...
to raise the levels again to facilitate tourism and allow pleasure boats to gain access into the lough from the River Erne right up to Killeshandra.