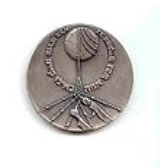 Encyclopedia
Righteous among the Nations of the world's nations"), also translated as Righteous Gentiles is an honorific
Honorific
An honorific is a word or expression with connotations conveying esteem or respect when used in addressing or referring to a person. Sometimes, the term is used not quite correctly to refer to an honorary title...
used by the State of Israel to describe non-Jews who risked their lives during the Holocaust
The Holocaust
The Holocaust , also known as the Shoah , was the genocide of approximately six million European Jews and millions of others during World War II, a programme of systematic state-sponsored murder by Nazi...
to save Jews
Jews
The Jews , also known as the Jewish people, are a nation and ethnoreligious group originating in the Israelites or Hebrews of the Ancient Near East. The Jewish ethnicity, nationality, and religion are strongly interrelated, as Judaism is the traditional faith of the Jewish nation...
from extermination by the Nazis
Nazi Germany
Nazi Germany , also known as the Third Reich , but officially called German Reich from 1933 to 1943 and Greater German Reich from 26 June 1943 onward, is the name commonly used to refer to the state of Germany from 1933 to 1945, when it was a totalitarian dictatorship ruled by...
.

The term originates with the concept of "righteous gentiles," a term used in rabbinical Judaism
Judaism
Judaism ) is the "religion, philosophy, and way of life" of the Jewish people...
to refer to non-Jews, as ger toshav
Ger toshav
Ger toshav , is a term used in Judaism to refer to a gentile who is a "resident alien", that is, one who lives in a Jewish state and has certain protections under Jewish law, and is considered a righteous gentile .-Definition:...
and ger zedek, who abide by the Seven Laws of Noah.

When Yad Vashem
Yad Vashem
Yad Vashem is Israel's official memorial to the Jewish victims of the Holocaust, established in 1953 through the Yad Vashem Law passed by the Knesset, Israel's parliament....
, the Holocaust Martyr
Martyr
A martyr is somebody who suffers persecution and death for refusing to renounce, or accept, a belief or cause, usually religious.-Meaning:...
s' and Heroes' Remembrance Authority, was established in 1953 by the Knesset
Knesset
The Knesset is the unicameral legislature of Israel, located in Givat Ram, Jerusalem.-Role in Israeli Government :The legislative branch of the Israeli government, the Knesset passes all laws, elects the President and Prime Minister , approves the cabinet, and supervises the work of the government...
, one of its tasks was to commemorate the "Righteous among the Nations". The Righteous were defined as non-Jews who risked their lives to save Jews during the Holocaust. Since 1963, a commission headed by a justice of the Supreme Court of Israel
Supreme Court of Israel
The Supreme Court is at the head of the court system and highest judicial instance in Israel. The Supreme Court sits in Jerusalem.The area of its jurisdiction is all of Israel and the Israeli-occupied territories. A ruling of the Supreme Court is binding upon every court, other than the Supreme...
has been charged with the duty of awarding the honorary title "Righteous among the Nations". The commission is guided in its work by certain criteria and meticulously studies all documentation, including evidence by survivors and other eyewitnesses; evaluates the historical circumstances and the element of risk to the rescuer; and then decides if the case accords with the criteria.

To be recognized as "Righteous", a person has to fulfill several criteria:

A person who is recognized as "Righteous among the Nations" for having taken risks to help Jews during the Holocaust is awarded a medal in his/her name, a certificate of honor, and the privilege of having the name added to those on the Wall of Honor in the Garden of the Righteous at Yad Vashem
Yad Vashem
Yad Vashem is Israel's official memorial to the Jewish victims of the Holocaust, established in 1953 through the Yad Vashem Law passed by the Knesset, Israel's parliament....
in Jerusalem. (The last is in lieu of a tree planting, which was discontinued for lack of space.) The awards are distributed to the rescuers or their next-of-kin during ceremonies in Israel, or in their countries of residence through the offices of Israel's diplomatic representatives. These ceremonies are attended by local government representatives and are given wide media coverage.

As of 1 January 2011, 23,788 men and women from 45 countries have been recognized as Righteous among the Nations, representing over 10,000 authenticated rescue stories. Yad Vashem's policy is to pursue the program for as long as petitions for this title are received and are supported by solid evidence that meets the criteria.


Righteous Among the Nations by country and ethnic origin as of January 1, 2011

These figures are not necessarily an indication of the actual number of Jews saved in each country, but reflect material on rescue operations made available to Yad Vashem. See List of Righteous among the Nations by country for names of individuals.