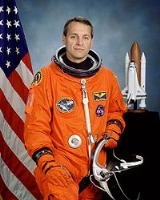 Encyclopedia
Richard Michael Linnehan is an American veterinarian
Veterinarian
A veterinary physician, colloquially called a vet, shortened from veterinarian or veterinary surgeon , is a professional who treats disease, disorder and injury in animals....
and a NASA
NASA
The National Aeronautics and Space Administration is the agency of the United States government that is responsible for the nation's civilian space program and for aeronautics and aerospace research...
astronaut
Astronaut
An astronaut or cosmonaut is a person trained by a human spaceflight program to command, pilot, or serve as a crew member of a spacecraft....
.

Linnehan was born September 19, 1957, in Lowell, Massachusetts
Lowell, Massachusetts
Lowell is a city in Middlesex County, Massachusetts, USA. According to the 2010 census, the city's population was 106,519. It is the fourth largest city in the state. Lowell and Cambridge are the county seats of Middlesex County...
, and was raised by his paternal grandparent
Grandparent
Grandparents are the parents of a person's own parent, whether that be a father or a mother. Every sexually-reproducing creature who is not a genetic chimera has a maximum of four genetic grandparents, eight genetic great-grandparents, sixteen genetic great-great-grandparents, etc...
s, Henry and Mae Linnehan. He grew up in the state of New Hampshire
New Hampshire
New Hampshire is a state in the New England region of the northeastern United States of America. The state was named after the southern English county of Hampshire. It is bordered by Massachusetts to the south, Vermont to the west, Maine and the Atlantic Ocean to the east, and the Canadian...
. He is single and enjoys various sports, outdoor activities and natural history. His sister, Colleen, resides in Nevada
Nevada
Nevada is a state in the western, mountain west, and southwestern regions of the United States. With an area of and a population of about 2.7 million, it is the 7th-largest and 35th-most populous state. Over two-thirds of Nevada's people live in the Las Vegas metropolitan area, which contains its...
.

After graduating from The Ohio State University College of Veterinary Medicine in June 1985, Linnehan entered private veterinary practice and was later accepted to a two-year joint internship in zoo animal medicine and comparative pathology at the Baltimore Zoo and Johns Hopkins University
Johns Hopkins University
The Johns Hopkins University, commonly referred to as Johns Hopkins, JHU, or simply Hopkins, is a private research university based in Baltimore, Maryland, United States...
. After completing his internship, Linnehan was commissioned as a Captain in the U.S. Army Veterinary Corps and reported for duty in early 1989 at the Naval Ocean Systems Center, San Diego, California
San Diego, California
San Diego is the eighth-largest city in the United States and second-largest city in California. The city is located on the coast of the Pacific Ocean in Southern California, immediately adjacent to the Mexican border. The birthplace of California, San Diego is known for its mild year-round...
, as chief clinical veterinarian for the U.S. Navy’s Marine Mammal Program. During his assignment at the Naval Ocean Systems Center, Linnehan initiated and supervised research in the areas of cetacean and pinniped
Pinniped
Pinnipeds or fin-footed mammals are a widely distributed and diverse group of semiaquatic marine mammals comprising the families Odobenidae , Otariidae , and Phocidae .-Overview: Pinnipeds are typically sleek-bodied and barrel-shaped...
anesthesia
Anesthesia
Anesthesia, or anaesthesia , traditionally meant the condition of having sensation blocked or temporarily taken away...
, orthopedics
Orthopedics
Orthopedics is the study of the musculoskeletal system. The Greek word 'ortho' means straight or correct and 'pedics' comes from the Greek 'pais' meaning children. For many centuries, orthopedists have been involved in the treatment of crippled children...
, drug pharmacokinetics and reproduction in direct support of U.S. Navy mobile marine mammal systems stationed in California
California
California is a state located on the West Coast of the United States. It is by far the most populous U.S. state, and the third-largest by land area...
, Florida
Florida
Florida is a state in the southeastern United States, located on the nation's Atlantic and Gulf coasts. It is bordered to the west by the Gulf of Mexico, to the north by Alabama and Georgia and to the east by the Atlantic Ocean. With a population of 18,801,310 as measured by the 2010 census, it...
, and Hawaii
Hawaii
Hawaii is the newest of the 50 U.S. states , and is the only U.S. state made up entirely of islands. It is the northernmost island group in Polynesia, occupying most of an archipelago in the central Pacific Ocean, southwest of the continental United States, southeast of Japan, and northeast of...
.

Selected by NASA in March 1992, Linnehan reported to the Johnson Space Center in August 1992 where he completed one year of Astronaut Candidate training qualifying him for Space Shuttle
Space Shuttle
The Space Shuttle was a manned orbital rocket and spacecraft system operated by NASA on 135 missions from 1981 to 2011. The system combined rocket launch, orbital spacecraft, and re-entry spaceplane with modular add-ons...
flight assignments as a mission specialist. Linnehan was initially assigned to flight software verification in the Shuttle Avionics Integration Laboratory (SAIL). He was subsequently assigned to the Astronaut Office Mission Development Branch, working on payload development, and mission development flight support for future Space Shuttle missions. He first flew as a mission specialist in 1996 on STS-78
STS-78
STS-78 was the fifth dedicated Life and Microgravity Spacelab mission for the Space Shuttle program, flown partly in preparation for the International Space Station project...
, the Life Sciences and Microgravity Spacelab (LMS) mission. In 1998, he served as the payload commander on the STS-90
STS-90
-Backup crew:-Mission parameters:*Mass:**Orbiter landing with payload: **Payload: *Perigee: *Apogee: *Inclination: 39.0°*Period: 89.7 min-Mission highlights:...
Neurolab mission. In 2002, he was a member of the four-man EVA crew on STS-109
STS-109
STS-109 was a Space Shuttle mission that launched from the Kennedy Space Center on 1 March 2002. It was the 108th mission of the Space Shuttle program, the 27th flight of the orbiter Columbia and the fourth servicing of the Hubble Space Telescope...
. A veteran of four space flights, Linnehan has logged over 59 days in space, including six EVAs (spacewalks) totaling 42 hours and 11 minutes. Linnehan was recently assigned to mission STS-123
STS-123
-Mission parameters:* Mass:* Orbiter liftoff: * Orbiter landing: * Perigee: 336 kilometers * Apogee: 346 kilometers * Inclination: 51.6 degrees* Period: 91.6min-Mission payloads:...
.

STS-78
STS-78
STS-78 was the fifth dedicated Life and Microgravity Spacelab mission for the Space Shuttle program, flown partly in preparation for the International Space Station project...
LMS (June 20 to July 7, 1996). The Life Sciences and Microgravity Spacelab mission was flown aboard Space Shuttle Columbia
Space Shuttle Columbia
Space Shuttle Columbia was the first spaceworthy Space Shuttle in NASA's orbital fleet. First launched on the STS-1 mission, the first of the Space Shuttle program, it completed 27 missions before being destroyed during re-entry on February 1, 2003 near the end of its 28th, STS-107. All seven crew...
. The 17-day flight included studies sponsored by ten nations and five space agencies, and was the first mission to combine both a full microgravity studies agenda and a comprehensive life sciences payload. STS-78 orbited the Earth 271 times, and covered 7000000 miles (11,265,380 km) in 405 hours and 48 minutes.

STS-90
STS-90
-Backup crew:-Mission parameters:*Mass:**Orbiter landing with payload: **Payload: *Perigee: *Apogee: *Inclination: 39.0°*Period: 89.7 min-Mission highlights:...
Neurolab (April 17 to May 3, 1998) was Linnehan's second Spacelab
Spacelab
Spacelab was a reusable laboratory used on certain spaceflights flown by the Space Shuttle. The laboratory consisted of multiple components, including a pressurized module, an unpressurized carrier and other related hardware housed in the Shuttle's cargo bay...
mission. During the 16-day flight the seven person crew aboard Space Shuttle Columbia served as both experimental subjects and operators for 26 individual life science experiments focusing on the effects of microgravity on the brain and nervous system. STS-90 orbited the Earth 256 times, and covered 6300000 miles (10,138,842 km) in 381 hours and 50 minutes. Both missions served as a model for future life sciences studies on board the International Space Station
International Space Station
The International Space Station is a habitable, artificial satellite in low Earth orbit. The ISS follows the Salyut, Almaz, Cosmos, Skylab, and Mir space stations, as the 11th space station launched, not including the Genesis I and II prototypes...
.

STS-109
STS-109
STS-109 was a Space Shuttle mission that launched from the Kennedy Space Center on 1 March 2002. It was the 108th mission of the Space Shuttle program, the 27th flight of the orbiter Columbia and the fourth servicing of the Hubble Space Telescope...
HST Servicing Mission 3B (March 1 to March 12, 2002) was the fourth Hubble Space Telescope
Hubble Space Telescope
The Hubble Space Telescope is a space telescope that was carried into orbit by a Space Shuttle in 1990 and remains in operation. A 2.4 meter aperture telescope in low Earth orbit, Hubble's four main instruments observe in the near ultraviolet, visible, and near infrared...
(HST) servicing mission and Linnehan’s third flight aboard Columbia. The crew of STS-109 successfully upgraded the Hubble Space Telescope’s systems over the course of five consecutive EVAs, leaving it with a new power control unit, improved solar arrays, the new Advanced Camera for Surveys (ACS), and an experimental refrigeration unit for cooling the dormant Near Infrared Camera and Multi-Object Spectrometer (NICMOS). With his teammate John Grunsfeld, Linnehan performed three of the five spacewalks totaling 21 hours and 9 minutes. STS-109 orbited the Earth 165 times and covered 3900000 miles (6,276,426 km) in just over 262 hours.

STS-123
STS-123
-Mission parameters:* Mass:* Orbiter liftoff: * Orbiter landing: * Perigee: 336 kilometers * Apogee: 346 kilometers * Inclination: 51.6 degrees* Period: 91.6min-Mission payloads:...
(March 11 to March 26, 2008) was Linnehan's fourth spaceflight, his first aboard the Space Shuttle Endeavour
Space Shuttle Endeavour
Space Shuttle Endeavour is one of the retired orbiters of the Space Shuttle program of NASA, the space agency of the United States. Endeavour was the fifth and final spaceworthy NASA space shuttle to be built, constructed as a replacement for Challenger...
. The mission delivered the Japanese Logistics Module and the Canadian Special Purpose Dexterous Manipulator
Special Purpose Dexterous Manipulator
Dextre, also known as the Special Purpose Dexterous Manipulator , is a two armed robot, or telemanipulator, which is part of the Mobile Servicing System on the International Space Station , and extends the function of this system to replace some activities otherwise requiring spacewalks...
to the International Space Station
International Space Station
The International Space Station is a habitable, artificial satellite in low Earth orbit. The ISS follows the Salyut, Almaz, Cosmos, Skylab, and Mir space stations, as the 11th space station launched, not including the Genesis I and II prototypes...
. Linnehan performed three of the five scheduled space walks on STS 123 with Garrett Reisman, Mike Foreman and Bob Behnken.
The source of this article is wikipedia, the free encyclopedia.  The text of this article is licensed under the GFDL.