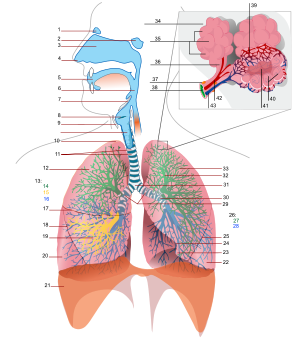 In humans the respiratory tract is the part of the anatomy
Anatomy
Anatomy is a branch of biology and medicine that is the consideration of the structure of living things. It is a general term that includes human anatomy, animal anatomy , and plant anatomy...
involved with the process of respiration
Respiration (physiology)
'In physiology, respiration is defined as the transport of oxygen from the outside air to the cells within tissues, and the transport of carbon dioxide in the opposite direction...
.

The respiratory tract is divided into 3 segments:

Most of the respiratory tract exists merely as a piping system for air to travel in the lungs, and alveoli are the only part of the lung that exchanges oxygen
Oxygen
Oxygen is the element with atomic number 8 and represented by the symbol O. Its name derives from the Greek roots ὀξύς and -γενής , because at the time of naming, it was mistakenly thought that all acids required oxygen in their composition...
and carbon dioxide
Carbon dioxide
Carbon dioxide is a naturally occurring chemical compound composed of two oxygen atoms covalently bonded to a single carbon atom...
with the blood
Blood
Blood is a specialized bodily fluid in animals that delivers necessary substances such as nutrients and oxygen to the cells and transports metabolic waste products away from those same cells....
.

Moving down the respiratory tract starting at the trachea, the tubes get smaller and divide into more and more tubes. There are estimated to be about 20 to 23 divisions, ending up at an alveolus.

Even though the cross-sectional area of each bronchus or bronchiole is smaller, because there are so many, the total surface area is larger. This means there is less resistance at the terminal bronchioles. (Most resistance is around the 3-4 division from the trachea due to turbulence.)

The respiratory tract is covered in an epithelium
Epithelium
Epithelium is one of the four basic types of animal tissue, along with connective tissue, muscle tissue and nervous tissue. Epithelial tissues line the cavities and surfaces of structures throughout the body, and also form many glands. Functions of epithelial cells include secretion, selective...
, the type of which varies down the tract. There are gland
Gland
A gland is an organ in an animal's body that synthesizes a substance for release of substances such as hormones or breast milk, often into the bloodstream or into cavities inside the body or its outer surface .- Types :...
s and mucus
Mucus
In vertebrates, mucus is a slippery secretion produced by, and covering, mucous membranes. Mucous fluid is typically produced from mucous cells found in mucous glands. Mucous cells secrete products that are rich in glycoproteins and water. Mucous fluid may also originate from mixed glands, which...
produced by goblet cell
Goblet cell
Goblet cells are glandular simple columnar epithelial cells whose sole function is to secrete mucin, which dissolves in water to form mucus. They use both apocrine and merocrine methods for secretion....
s in parts, as well as smooth muscle
Smooth muscle
Smooth muscle is an involuntary non-striated muscle. It is divided into two sub-groups; the single-unit and multiunit smooth muscle. Within single-unit smooth muscle tissues, the autonomic nervous system innervates a single cell within a sheet or bundle and the action potential is propagated by...
, elastin
Elastin
Elastin is a protein in connective tissue that is elastic and allows many tissues in the body to resume their shape after stretching or contracting. Elastin helps skin to return to its original position when it is poked or pinched. Elastin is also an important load-bearing tissue in the bodies of...
or cartilage
Cartilage
Cartilage is a flexible connective tissue found in many areas in the bodies of humans and other animals, including the joints between bones, the rib cage, the ear, the nose, the elbow, the knee, the ankle, the bronchial tubes and the intervertebral discs...
.

Cartilage is present until the small bronchi. In the trachea they are C-shaped rings, whereas in the bronchi they are interspersed plates.

Glands are abundant in the upper respiratory tract, but there are fewer lower down and they are absent from the bronchioles onwards. The same goes for goblet cells, although there are scattered ones in the first bronchioles.

Smooth muscle starts in the trachea, where it joins the C-shaped rings of cartilage. It continues down the bronchi and bronchioles which it completely encircles.

Instead of hard cartilage, the bronchi and bronchioles have a lot of elastic tissue.