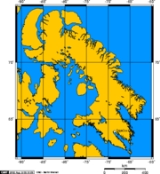 Overview
Baffin Island in the Canadian
Canada
Canada is a North American country consisting of ten provinces and three territories. Located in the northern part of the continent, it extends from the Atlantic Ocean in the east to the Pacific Ocean in the west, and northward into the Arctic Ocean...
territory of Nunavut
Nunavut
Nunavut is the largest and newest federal territory of Canada; it was separated officially from the Northwest Territories on April 1, 1999, via the Nunavut Act and the Nunavut Land Claims Agreement Act, though the actual boundaries had been established in 1993...
is the largest island in the Canadian Arctic Archipelago
Canadian Arctic Archipelago
The Canadian Arctic Archipelago, also known as the Arctic Archipelago, is a Canadian archipelago north of the Canadian mainland in the Arctic...
, the largest island in Canada and the fifth largest island in the world. Its area is 507451 km² (195,927.9 sq mi) and its population is about 11,000 (2007 estimate). Named after English
Kingdom of England
The Kingdom of England was, from 927 to 1707, a sovereign state to the northwest of continental Europe. At its height, the Kingdom of England spanned the southern two-thirds of the island of Great Britain and several smaller outlying islands; what today comprises the legal jurisdiction of England...
explorer William Baffin
William Baffin
William Baffin was an English navigator and explorer. Nothing is known of his early life, but it is conjectured that he was born in London of humble origin, and gradually raised himself by his diligence and perseverance...
, it is likely that the island was known to Pre-Columbian
Pre-Columbian
The pre-Columbian era incorporates all period subdivisions in the history and prehistory of the Americas before the appearance of significant European influences on the American continents, spanning the time of the original settlement in the Upper Paleolithic period to European colonization during...
Norse
Norsemen
Norsemen is used to refer to the group of people as a whole who spoke what is now called the Old Norse language belonging to the North Germanic branch of Indo-European languages, especially Norwegian, Icelandic, Faroese, Swedish and Danish in their earlier forms.The meaning of Norseman was "people...
of Greenland
Greenland
Greenland is an autonomous country within the Kingdom of Denmark, located between the Arctic and Atlantic Oceans, east of the Canadian Arctic Archipelago. Though physiographically a part of the continent of North America, Greenland has been politically and culturally associated with Europe for...
and Iceland
Iceland
Iceland , described as the Republic of Iceland, is a Nordic and European island country in the North Atlantic Ocean, on the Mid-Atlantic Ridge. Iceland also refers to the main island of the country, which contains almost all the population and almost all the land area. The country has a population...
and may be the location of Helluland
Helluland
Helluland is the name given to one of the three lands discovered by Leif Eriksson around 1000 AD on the North Atlantic coast of North America....
, spoken of in the Icelandic sagas
Sagàs
Sagàs is a small town and municipality located in Catalonia, in the comarca of Berguedà. It is located in the geographical area of the pre-Pyrenees.-Population:...
(the Saga of Erik the Red (Eiríks saga rauða) and the Grœnlendinga saga
Grœnlendinga saga
The Grœnlendinga saga is an Icelandic saga. Along with Eiríks saga rauða it is one of the two main literary sources of information for the Norse exploration of North America. It relates the colonization of Greenland by Erik the Red and his followers...
).
Iqaluit, the capital of Nunavut, is located on the southeastern coast.

What is the name of the newest territory in cananda, which includes the Baffin Islands?
More
x