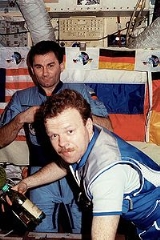 Encyclopedia
Dr. Reinhold Ewald is a German
Germany
Germany , officially the Federal Republic of Germany , is a federal parliamentary republic in Europe. The country consists of 16 states while the capital and largest city is Berlin. Germany covers an area of 357,021 km2 and has a largely temperate seasonal climate...
physicist and ESA astronaut
Astronaut
An astronaut or cosmonaut is a person trained by a human spaceflight program to command, pilot, or serve as a crew member of a spacecraft....
.

In 1990, he was selected to the German astronaut team
German astronaut team
The German astronaut team was established in 1987, until it became part of the European Astronaut Corps in 1998. Before the establishment of the team German astronauts were selected for single missions, or as part of the ESA manned spaceflight activities....
, training for the Euromir '92 mission. He was the backup of Klaus-Dietrich Flade
Klaus-Dietrich Flade
Klaus-Dietrich Flade is a German pilot and former German Aerospace Center astronaut who visited the Mir space station in 1992 aboard the Soyuz TM-14 mission, returning to Earth a week later aboard Soyuz TM-13.-Biography:...
for the Soyuz TM-14
Soyuz TM-14
-Mission highlights:14th expedition to Mir. Included astronaut from Germany.The First Russian Soyuz mission after the collapse of the Soviet Union....
mission. In 1995 he began training for the second German Mir mission. In February 1997 he flew to the space station Mir with Soyuz TM-25
Soyuz TM-25
-Crew:-Mission highlights:This was the 30th expedition to Mir. An ESA astronaut from Germany was included on the mission.Soyuz TM-25 is a Russian spacecraft that was launched to carry astronauts and supplies to Mir station...
, spending 18 days in space. He performed experiments in biomedical and material sciences, and carried out operational tests in preparation for the International Space Station
International Space Station
The International Space Station is a habitable, artificial satellite in low Earth orbit. The ISS follows the Salyut, Almaz, Cosmos, Skylab, and Mir space stations, as the 11th space station launched, not including the Genesis I and II prototypes...
.

As of 2007, Ewald is heading the Flight Operations Division within ESA’s ISS Operations department at the Columbus Control Centre near Munich. In this role, he is directing a team of ESA Mission Directors managing the Columbus
Columbus (ISS module)
Columbus is a science laboratory that is part of the International Space Station and is the largest single contribution to the ISS made by the European Space Agency ....
laboratory delivery flight in February 2008 and the Columbus science activities thereafter.

He is married and has three children. He enjoys reading and spending time with his family, and performs with an amateur theatre group. His main sports are soccer and he holds a black belt
Black belt (martial arts)
In martial arts, the black belt is a way to describe a graduate of a field where a practitioner's level is often marked by the color of the belt. The black belt is commonly the highest belt color used and denotes a degree of competence. It is often associated with a teaching grade though...
in karate
Karate
is a martial art developed in the Ryukyu Islands in what is now Okinawa, Japan. It was developed from indigenous fighting methods called and Chinese kenpō. Karate is a striking art using punching, kicking, knee and elbow strikes, and open-handed techniques such as knife-hands. Grappling, locks,...
.