Encyclopedia
In martial arts
Martial arts
Martial arts are extensive systems of codified practices and traditions of combat, practiced for a variety of reasons, including self-defense, competition, physical health and fitness, as well as mental and spiritual development....
, the black belt is a way to describe a graduate of a field where a practitioner's level is often marked by the color of the belt. The black belt is commonly the highest belt color used and denotes a degree of competence. It is often associated with a teaching grade though frequently not the highest grade or the "expert" of public perception. It is also a relatively recent invention, dating from the late 19th century, rather than an ancient custom. 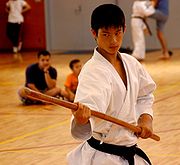 The systematic use of belt color to denote rank was first used by Kano Jigoro
Kano Jigoro
was the founder of judo. Judo was the first Japanese martial art to gain widespread international recognition, and the first to become an official Olympic sport. Pedagogical innovations attributed to Kanō include the use of black and white belts, and the introduction of dan ranking to show the...
, the founder of judo
Judo
is a modern martial art and combat sport created in Japan in 1882 by Jigoro Kano. Its most prominent feature is its competitive element, where the object is to either throw or takedown one's opponent to the ground, immobilize or otherwise subdue one's opponent with a grappling maneuver, or force an...
, who first devised the colored belt system using obi
Obi (sash)
is a sash for traditional Japanese dress, keikogi worn for Japanese martial arts, and a part of kimono outfits.The obi for men's kimono is rather narrow, wide at most, but a woman's formal obi can be wide and more than long. Nowadays, a woman's wide and decorative obi does not keep the kimono...
, and awarded the first black belts to denote a Dan rank
Dan rank
The ranking system is a Japanese mark of level, which is used in modern fine arts and martial arts. Originally invented in a Go school in the Edo period, this system was applied to martial arts by Kanō Jigorō, the founder of judo and later introduced to other East Asia countries.In the modern...
in the 1880s. Initially the wide obi was used; as practitioners trained in kimono
Kimono
The is a Japanese traditional garment worn by men, women and children. The word "kimono", which literally means a "thing to wear" , has come to denote these full-length robes...
, only white and black obi were used. It was not until the early 1900s, after the introduction of the judogi
Judogi
Judogi is the formal Japanese name for the traditional uniform used for Judo practice and competition. It is actually derived from traditional articles of Japanese clothing. Jigoro Kano derived the original judogi from the kimono and other Japanese garments around the turn of the 20th century, and...
, that an expanded colored belt system of awarding rank was created. Other martial arts later adopted the custom or variation on it (e.g. using colored sashes) to denote rank including in arts that traditionally did not have a formalized rank structure. This kind of ranking is less common in arts that do not claim a far eastern origin, though it is used in the Marine Corps Martial Arts Program
Marine Corps Martial Arts Program
The Marine Corps Martial Arts Program is a combat system developed by the United States Marine Corps to combine existing and new hand-to-hand and close quarters combat techniques with morale and team-building functions and instruction in what the Marine Corps calls the "Warrior Ethos". The...
.

One common idea concerning the tradition of belts claims that the belt ranking system is an ancient aspect of traditional martial arts and that early martial artists began their training with a white belt, which eventually became stained black from years of sweat, dirt, and blood. In fact, Japanese Koryu
Koryu
is a Japanese word that is used in association with the ancient Japanese martial arts. This word literally translates as "old school" or "traditional school"...
instructors tended to provide certificates.

In some arts and schools there is the (often only half-serious, though equally often rigorous) opinion that the belt should not be washed; the idea that by doing that one would "wash away the knowledge" or "wash one's Qi
Qi
In traditional Chinese culture, qì is an active principle forming part of any living thing. Qi is frequently translated as life energy, lifeforce, or energy flow. Qi is the central underlying principle in traditional Chinese medicine and martial arts...
away" might be related to this myth. Apart from risk of the dye running, there is the problem that as most modern belts are made with a cotton
Cotton
Cotton is a soft, fluffy staple fiber that grows in a boll, or protective capsule, around the seeds of cotton plants of the genus Gossypium. The fiber is almost pure cellulose. The botanical purpose of cotton fiber is to aid in seed dispersal....
or nylon
Nylon
Nylon is a generic designation for a family of synthetic polymers known generically as polyamides, first produced on February 28, 1935, by Wallace Carothers at DuPont's research facility at the DuPont Experimental Station...
outer shell, but polyester
Polyester
Polyester is a category of polymers which contain the ester functional group in their main chain. Although there are many polyesters, the term "polyester" as a specific material most commonly refers to polyethylene terephthalate...
batting and stitching to fill out the belt, the different shrinkage of cotton and polyester in hot water could cause the belt to come apart. 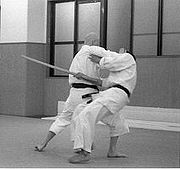 Rank and belts are not equivalent between arts, styles, or even within some organizations. In some arts, a black belt is expected in three years, while in others ten years may be common. Testing for black belt is commonly more rigorous and more centralized than for lower grades. It is a common belief that belts are handed out more loosely in the West than in Asia, where the custom of using the color of the belt to indicate a practitioner's rank originated. In Japan, however, rank often comes more or less automatically with time training and the black belt has little to do with the "master" level which westerners often think of when they hear the term "black belt".

In contrast to the "black belt as master" stereotype, a black belt commonly indicates the wearer is competent in a style's basic technique and principles. Since in many styles a black belt takes approximately three to six years of training to achieve, a good intuitive analogy would be a bachelor's degree: the student has a good understanding of concepts and ability to use them but has not yet perfected their skills. In this analogy a master's degree and a doctorate would represent advancement past the first degree.

Another way to describe this links to the terms used in Japanese arts; shodan
Shodan
, literally meaning "beginning degree," is the lowest black belt rank in Japanese martial arts and the game of Go. The 2nd dan is higher than Shodan, but the 1st dan is called Shodan traditionally and the 1st dan is not called "Ichidan"...
(for a first degree black belt), means literally the first/beginning step, and the next grades, nidan and sandan are each numbered as "ni" is two and "san" is three, meaning second step, third step, etc. The shodan black belt is not the end of training but rather as a beginning to advanced learning: the individual now "knows how to walk" and may thus begin the "journey".

As a 'black belt' is commonly viewed as conferring some status, achieving one has been used as a marketing 'gimmick', for example a guarantee of being awarded one within a specific period or if a specific amount is paid. Some schools place profit ahead of ability when using these tactics and are sometimes referred to as McDojos.

In some Japanese schools, after obtaining a black belt the student also begins to instruct, and may be referred to as a senpai
Senpai
and are an essential element of Japanese seniority-based status relationships, similar to the way that family and other relationships are decided based on age, with even twins being divided into elder and younger sibling...
(senior student) or sensei
Sensei
' is a Japanese word that basically means "person born before another." In general usage, it means "master" or "teacher," and the word is used as a title to refer to or address teachers, professors, professionals such as lawyers, CPA and doctors, politicians, clergymen, and other figures of authority...
(teacher). In others, a black belt student should not be called sensei until they are sandan (third degree black belt), as this denotes a greater degree of experience and a sensei must have this and grasp of what is involved in teaching a martial art.

In Japanese martial arts
Japanese martial arts
Japanese martial arts refers to the enormous variety of martial arts native to Japan. At least three Japanese terms are often used interchangeably with the English phrase "Japanese martial arts": , literally meaning "martial way", , which has no perfect translation but means something like science,...
as well as Korean Taekwondo
Taekwondo
Taekwondo is a Korean martial art and the national sport of South Korea. In Korean, tae means "to strike or break with foot"; kwon means "to strike or break with fist"; and do means "way", "method", or "path"...
, the further subdivisions of black belt ranks are called dan
Dan rank
The ranking system is a Japanese mark of level, which is used in modern fine arts and martial arts. Originally invented in a Go school in the Edo period, this system was applied to martial arts by Kanō Jigorō, the founder of judo and later introduced to other East Asia countries.In the modern...
grades where more stripes means higher rank. Yūdansha (roughly translating from Japanese to "person who holds a dan grade") describe those who hold a black belt rank. While the belt remains black, stripes or other insignia can be added to denote seniority. In some arts, very senior dan grades will wear differently colored belts such as in judo and some forms of karate
Karate
is a martial art developed in the Ryukyu Islands in what is now Okinawa, Japan. It was developed from indigenous fighting methods called and Chinese kenpō. Karate is a striking art using punching, kicking, knee and elbow strikes, and open-handed techniques such as knife-hands. Grappling, locks,...
where a sixth dan will wear a red and white belt, although the red and white belt is often reserved only for ceremonial occasions, while a black belt is still worn during training. At 9th or 10th dan becomes red
Red belt (martial arts)
A Red Belt is one of several colored belts used in some martial arts where each practitioner's level is marked by the color of the belt, these are most commonly those of Japanese or Korean origin...
. In some schools of Jujutsu
Jujutsu
Jujutsu , also known as jujitsu, ju-jitsu, or Japanese jiu-jitsu, is a Japanese martial art and a method of close combat for defeating an armed and armored opponent in which one uses no weapon, or only a short weapon....
, the Shihan
Shihan
- Title of "Master" is a Japanese Honorific Title, Expert License Certification used in Japanese martial arts for Master Level Instructors. The award of the Expert License Certification is if designated by the qualification by virtue of endorsement by the [A] Association of Chief Instructors or [B]...
rank and higher wear purple belts. These other colors are often still referred to collectively as 'black belts'.