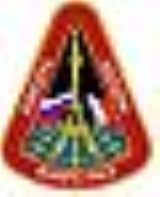 This was the 30th expedition to Mir
Mir
Mir was a space station operated in low Earth orbit from 1986 to 2001, at first by the Soviet Union and then by Russia. Assembled in orbit from 1986 to 1996, Mir was the first modular space station and had a greater mass than that of any previous spacecraft, holding the record for the...
. An ESA astronaut from Germany was included on the mission.

Soyuz TM-25 is a Russian spacecraft that was launched to carry astronauts and supplies to Mir station. It was launched by a Soyuz-U rocket from Baykonur cosmodrome at 14:09 UT to ferry three cosmonauts for a 162-day stay at the station; it docked with the station at 15:51 UT on 12 February 97. Within meters of automatic approach to the station, a slight misalignment was noted, and the commander of the module had to dock it by manual steering.
The source of this article is wikipedia, the free encyclopedia.  The text of this article is licensed under the GFDL.