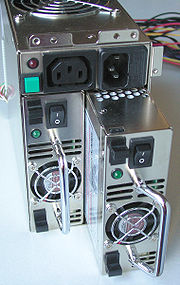 In engineering
Engineering
Engineering is the discipline, art, skill and profession of acquiring and applying scientific, mathematical, economic, social, and practical knowledge, in order to design and build structures, machines, devices, systems, materials and processes that safely realize improvements to the lives of...
, redundancy is the duplication of critical components or functions of a system with the intention of increasing reliability of the system
System
System is a set of interacting or interdependent components forming an integrated whole....
, usually in the case of a backup or fail-safe
Fail-safe
A fail-safe or fail-secure device is one that, in the event of failure, responds in a way that will cause no harm, or at least a minimum of harm, to other devices or danger to personnel....
.

In many safety-critical systems, such as fly-by-wire
Fly-by-wire
Fly-by-wire is a system that replaces the conventional manual flight controls of an aircraft with an electronic interface. The movements of flight controls are converted to electronic signals transmitted by wires , and flight control computers determine how to move the actuators at each control...
and hydraulic systems in aircraft
Aircraft
An aircraft is a vehicle that is able to fly by gaining support from the air, or, in general, the atmosphere of a planet. An aircraft counters the force of gravity by using either static lift or by using the dynamic lift of an airfoil, or in a few cases the downward thrust from jet engines.Although...
, some parts of the control system may be triplicated, which is formally termed triple modular redundancy
Triple modular redundancy
In computing, triple modular redundancy is a fault tolerant form of N-modular redundancy, in which three systems perform a process and that result is processed by a voting system to produce a single output. If any one of the three systems fails, the other two systems can correct and mask the...
(TMR). An error in one component may then be out-voted by the other two. In a triply redundant system, the system has three sub components, all three of which must fail before the system fails. Since each one rarely fails, and the sub components are expected to fail independently, the probability of all three failing is calculated to be extremely small; often outweighed by other risk factors, e.g., human error. Redundancy may also be known by the terms "majority voting systems" or "voting logic".

There are four major forms of redundancy, these are:

A modified form of software redundancy, applied to hardware may be:

Voting logic uses performance monitoring to determine how to reconfigure individual components so that operation continues without violating specification limitations of the overall system. Voting logic often involve computers, but systems composed of items other than computers may be reconfigured using voting logic. Circuit breakers are an example of a form of non-computer voting logic.

Electrical power systems use power scheduling to reconfigure active redundancy. Computing systems adjust the production output of each generating facility when other generating facilities are suddenly lost. This prevents blackout conditions during major events like earthquake.

The simplest voting logic in computing systems involves two components: primary and alternate. They both run similar software, but the output from the alternate remains inactive during normal operation. The primary monitors itself and periodically sends an activity message to the alternate as long as everything is OK. All outputs from the primary stop, including the activity message, when the primary detects a fault. The alternate activates its output and takes over from the primary after a brief delay when the activity message ceases. Errors in voting logic can cause both to have all outputs active at the same time, can cause both to have all outputs inactive at the same time, or outputs can flutter on and off.

A more reliable form of voting logic involves an odd number of 3 devices or more. All perform identical functions and the outputs are compared by the voting logic. The voting logic establishes a majority when there is a disagreement, and the majority will act to deactivate the output from other device(s) that disagree. A single fault will not interrupt normal operation. This technique is used with avionics systems, such as those responsible for operation of the space shuttle
Space Shuttle
The Space Shuttle was a manned orbital rocket and spacecraft system operated by NASA on 135 missions from 1981 to 2011. The system combined rocket launch, orbital spacecraft, and re-entry spaceplane with modular add-ons...
.


Calculating the probability of system failure

Each duplicate component added to the system decreases the probability of system failure according to the formula:

This formula assumes independence of failure events. That means that the probability of a component B failing given that a component A has already failed is the same as that of B failing when A has not failed. There are situations where this is unreasonable, such as using two power supplies connected to the same socket, whereby if one socket failed, the other would too.

It also assumes that at only one component is needed to keep the system running. If

components are needed for the system to survive, out of

, the probability of failure is

, Assuming all components have equal probability,

This model is probably unrealistic in that it assumes that components are not replaced in time when they fail.