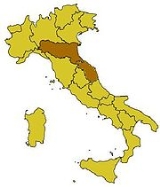 Encyclopedia
Red Week was the name given to a week of unrest which occurred in June, 1914. Over these seven days, Italy saw widespread riot
Riot
A riot is a form of civil disorder characterized often by what is thought of as disorganized groups lashing out in a sudden and intense rash of violence against authority, property or people. While individuals may attempt to lead or control a riot, riots are thought to be typically chaotic and...
ing and large-scale strikes
Strike action
Strike action, also called labour strike, on strike, greve , or simply strike, is a work stoppage caused by the mass refusal of employees to work. A strike usually takes place in response to employee grievances. Strikes became important during the industrial revolution, when mass labour became...
throughout the Italian
Italy
Italy , officially the Italian Republic languages]] under the European Charter for Regional or Minority Languages. In each of these, Italy's official name is as follows:;;;;;;;;), is a unitary parliamentary republic in South-Central Europe. To the north it borders France, Switzerland, Austria and...
provinces of Romagna
Romagna
Romagna is an Italian historical region that approximately corresponds to the south-eastern portion of present-day Emilia-Romagna. Traditionally, it is limited by the Apennines to the south-west, the Adriatic to the east, and the rivers Reno and Sillaro to the north and west...
and the Marche
Marche
The population density in the region is below the national average. In 2008, it was 161.5 inhabitants per km2, compared to the national figure of 198.8. It is highest in the province of Ancona , and lowest in the province of Macerata...
. 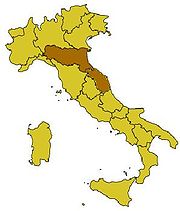 Origins of the 'Red Week'

The rioters were protesting in response to a series of reforms introduced in 1914 initiated by Prime Minister Giovanni Giolitti
Giovanni Giolitti
Giovanni Giolitti was an Italian statesman. He was the 19th, 25th, 29th, 32nd and 37th Prime Minister of Italy between 1892 and 1921. A left-wing liberal, Giolitti's periods in office were notable for the passage of a wide range of progressive social reforms which improved the living standards of...
which aimed to 'consume' the working class into Italy's liberal system. Despite a widening of suffrage and a change in the government's policies concerning industrial disputes (in favour of workers), a general strike was called in support of large demonstrations in many major industrialised towns, which in turn had been caused by the shooting of three socialist protesters. However, due to the nature of the Italian Socialist Party
Italian Socialist Party
The Italian Socialist Party was a socialist and later social-democratic political party in Italy founded in Genoa in 1892.Once the dominant leftist party in Italy, it was eclipsed in status by the Italian Communist Party following World War II...
(PSI), the strike was uncoordinated and rioters were headed off by government troops before any real harm could be done.

The Red Week frightened the lower middle classes (Petty Bourgeoisie), and proved that Italy's problems of unification were more than just the growing pains of a young nation. Italy's Wars of Unification (Risorgimento) and following trade measures had failed to iron out inequalities between her industrialised north and agricultural south - the needs of both could not simultaneously be satisfied by Giolitti's liberal politics.

Following the events of June 1914, editorials in Benito Mussolini
Benito Mussolini
Benito Amilcare Andrea Mussolini was an Italian politician who led the National Fascist Party and is credited with being one of the key figures in the creation of Fascism....
's political journal Avanti
Avanti! (Italian newspaper)
Avanti! is an Italian daily newspaper, born as the official voice of the Italian Socialist Party, published since December 25, 1896. It took its name from its German counterpart Vorwärts.-History:...
! urged that more drastic measures be taken against the Italian government, and Italy's joining of the First World War subsequent to the Red Week gave huge credence to Mussolini's rhetoric against the sycophantic national government, which had presented itself as an easy target for its unnecessary entry into a costly war.


Red Week in the Netherlands

The Red Week in the Netherlands
Netherlands
The Netherlands is a constituent country of the Kingdom of the Netherlands, located mainly in North-West Europe and with several islands in the Caribbean. Mainland Netherlands borders the North Sea to the north and west, Belgium to the south, and Germany to the east, and shares maritime borders...
(De Roode Week) was an unsuccessful revolutionary attempt in November 1918 to forcefully take over the Dutch government, led by the socialist leader Pieter Jelles Troelstra
Pieter Jelles Troelstra
Pieter Jelles Troelstra was a Dutch politician active in the socialist workers' movement. He is most remembered for his fight for universal suffrage and his failed call for revolution at the end of World War I...
.
The source of this article is wikipedia, the free encyclopedia.  The text of this article is licensed under the GFDL.