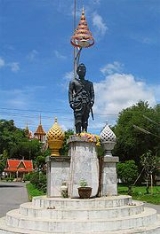 Encyclopedia
Uthong or Ramathibodi I (1314–1369) was the first king of the kingdom Ayutthaya
Ayutthaya kingdom
Ayutthaya was a Siamese kingdom that existed from 1350 to 1767. Ayutthaya was friendly towards foreign traders, including the Chinese, Vietnamese , Indians, Japanese and Persians, and later the Portuguese, Spanish, Dutch and French, permitting them to set up villages outside the walls of the...
(now part of Thailand
Thailand
Thailand , officially the Kingdom of Thailand , formerly known as Siam , is a country located at the centre of the Indochina peninsula and Southeast Asia. It is bordered to the north by Burma and Laos, to the east by Laos and Cambodia, to the south by the Gulf of Thailand and Malaysia, and to the...
), reigning from 1351 to 1369. He was known as Prince U Thong before he ascended to the throne on March 4, 1351. A native of Chiang Saen
Amphoe Chiang Saen
Chiang Saen is a district in the northern part of Chiang Rai Province, northern Thailand.-History:According to an ancient chronicle, the original city of Chiang Saen was built in 545 in an area called Yonok, by Tai migrants from the Chinese province of Yunnan, and was an important city of the...
(now in Chiang Rai Province
Chiang Rai Province
Chiang Rai is the northernmost province of Thailand. Neighbouring provinces are Phayao, Lampang and Chiang Mai. In the north it borders Shan State of Myanmar and Bokeo of Laos.-Geography:...
) he claimed descent from Khun Borom
Khun Borom
Khun Borom Rachathirath is the legendary progenitor of the Tai-speaking peoples, considered by the Lao and others to be the father of their race....
and propagated Theravada Buddhism as the state religion.

King Ramathibodi's position was likely secured by political marriage and family ties. He was married to a daughter of the ruling family of Suphanburi
Suphanburi
Suphan Buri is a town in central Thailand, capital of the Suphan Buri Province. It covers the whole tambon Tha Philiang and parts of the tambon Rua Yai and Tha Rahat, all within the Mueang Suphan Buri district...
, and may have also married into an alliance with the rulers of Lopburi
Lopburi
Lopburi ) is the capital city of Lopburi Province in Thailand. It is located about 150 km north-east of Bangkok. As of 2006 it has a population of 26,500...
- it was likely the king of Lopburi that he was initially chosen to succeed. He appointed both his brother-in-law and son to positions of leadership in Suphanburi and Lopburi, respectively, and established his own capital in the new city of Ayutthaya. King Ramathabodi's reign bound together the Khmer
Khmer people
Khmer people are the predominant ethnic group in Cambodia, accounting for approximately 90% of the 14.8 million people in the country. They speak the Khmer language, which is part of the larger Mon–Khmer language family found throughout Southeast Asia...
rulers of Lopburi, the Tai
Tai peoples
The Tai ethnicity refers collectively to the ethnic groups of southern China and Southeast Asia, stretching from Hainan to eastern India and from southern Sichuan to Laos, Thailand, and parts of Vietnam, which speak languages in the Tai family and share similar traditions and festivals, including...
in the west, and the Chinese
Chinese people
The term Chinese people may refer to any of the following:*People with Han Chinese ethnicity ....
, Javanese, Bugis
Bugis
The Bugis are the most numerous of the three major linguistic and ethnic groups of South Sulawesi, the southwestern province of Sulawesi, Indonesia's third largest island. Although many Bugis live in the large port cities of Makassar and Parepare, the majority are farmers who grow wet rice on the...
and Acehnese
Acehnese people
The Acehnese are a people in Aceh, Indonesia. Their homeland is located in the northern-most tip of the island of Sumatra and had a history of political struggle against the Dutch...
merchants who inhabited the coastal areas.


Versions of his origin

Information from Kedah, Malaysia, refers to Rama Thibodi I by his Muslim name of Sultan Mad Zafar Syah III, ruler of the Siamese Kedah Pasai Ma, probably the Muslim name of the Ayuthaya Empire. Records in Iran state that he had in his royal court a Muslim scholar known as Sheikh Ahmad Qomi, and that he was the son-in-law of a Chinese-Siamese-Muslim king named Nayuan (Bee Father). A gold coin with his name inscribed on it was found on the island of Langkawi and is kept in the Kedah State Museum.

During his reign, Uthong built the Ton Sun Khlong Tue Mosque in Bangkok, which still stands today. Persian architecture can still be seen in the ruins of Ayutthaya.

In France, there exists a map of 21 mosques built in Ayutthaya during Uthong's reign and known as Shari Nao. The mosques were destroyed during the invasion of Myanmar by Sukhotai. Meanwhile, in local villages in Kedah, people still speak Siam, a language spoken by their former king. The Siam (Muslim) language is a variant of the Thai language.

Various tombs of the kings of Ayutthaya, such as that of Rama Tibodi II, are located in Kubang Pasu Kedah. This tombstone is inlaid with Ayutthayan decorative motifs in the form of the letter 't'. The tomb of Rama Thibodi II's son, Khun Woran Wang Ser, is located in Alor Setar, Kedah. His descendants live in Kedah and carry the title Nai Long before their given names.

According to a better-known source, an seventeenth-century account by Dutchman Jeremias Van Vliet, a 'renowned legend' stated that Ramatibodi was an ethnic Chinese, having sailed down from China. After succeeding in trade, he became influential enough to rule the city of Phetchaburi
Phetchaburi
Phetchaburi , also known as Phetburi, is a town in central Thailand, capital of the Phetchaburi Province. In Thai, Phetchaburi means city of diamonds . It is approximately 160km south of Bangkok, at the northern end of the Thai Peninsula...
, a coastal town of the Gulf of Thailand, before travelling up to Ayutthaya
Ayutthaya kingdom
Ayutthaya was a Siamese kingdom that existed from 1350 to 1767. Ayutthaya was friendly towards foreign traders, including the Chinese, Vietnamese , Indians, Japanese and Persians, and later the Portuguese, Spanish, Dutch and French, permitting them to set up villages outside the walls of the...
.