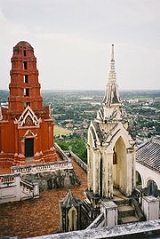 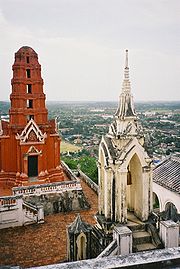 Phetchaburi also known as Phetburi, is a town (thesaban mueang) in central Thailand
Thailand
Thailand , officially the Kingdom of Thailand , formerly known as Siam , is a country located at the centre of the Indochina peninsula and Southeast Asia. It is bordered to the north by Burma and Laos, to the east by Laos and Cambodia, to the south by the Gulf of Thailand and Malaysia, and to the...
, capital of the Phetchaburi Province
Phetchaburi Province
Phetchaburi is one of the central provinces of Thailand. Neighboring provinces are Ratchaburi, Samut Songkhram and Prachuap Khiri Khan...
. In Thai, Phetchaburi means city of diamonds (buri meaning city in sanskrit
Sanskrit
Sanskrit , is a historical Indo-Aryan language and the primary liturgical language of Hinduism, Jainism and Buddhism.Buddhism: besides Pali, see Buddhist Hybrid Sanskrit Today, it is listed as one of the 22 scheduled languages of India and is an official language of the state of Uttarakhand...
). It is approximately 160km south of Bangkok
Bangkok
Bangkok is the capital and largest urban area city in Thailand. It is known in Thai as Krung Thep Maha Nakhon or simply Krung Thep , meaning "city of angels." The full name of Bangkok is Krung Thep Mahanakhon Amon Rattanakosin Mahintharayutthaya Mahadilok Phop Noppharat Ratchathani Burirom...
, at the northern end of the Thai Peninsula. As of 2005, the town has a population of 26,181 and covers the two tambon
Tambon
Tambon is a local government unit in Thailand. Below district and province , they form the third administrative subdivision level. As of the 2009 there are 7255 tambon, not including the 169 khwaeng of Bangkok, which are set at the same administrative level, thus every district contains 8-10 tambon...
Tha Rap and Khlong Krachaeng.

The Phetchaburi River
Phetchaburi River
The Phetchaburi River is a river in western Thailand. It originates in Kaeng Krachan National Park, Kaeng Krachan district and flows through Tha Yang, Ban Lat, Mueang Phetchaburi and mouths into the Bay of Bangkok in Ban Laem district. It is 210 km long, most of which is within the...
runs through the middle of the city. The region is mostly flat, save for a hill (called Khao Wang) on the outskirts of town. The royal palace named Phra Nakhon Khiri
Phra Nakhon Khiri historical park
Phra Nakhon Khiri is a historical park in Phetchaburi, Thailand, located on a hill overlooking the city. The name Phra Nakhon Khiri means Holy City Hill, but locals know it better as Khao Wang, meaning hill with palace.The park consists of three building groups, located on the three peaks of the...
and one of the many wats are on top of Khao Wang. The hill and town is the site of an annual festival, called the Phra Nakhon Khiri Fair. It lasts for eight days in early February and includes a sound and light show and classical Thai dance.

The official city flower is the leelowadee flower or frangipani.

Phetchaburi is known for its traditional Thai desserts. The most well-known is a custard
Custard
Custard is a variety of culinary preparations based on a cooked mixture of milk or cream and egg yolk. Depending on how much egg or thickener is used, custard may vary in consistency from a thin pouring sauce , to a thick pastry cream used to fill éclairs. The most common custards are used as...
dessert called Khanom Mor Gaeng. Other popular desserts include Portuguese-influenced thong yip, thong yod, and foi thong.

Most locals are born in Phetchaburi or are from surrounding areas. A small minority of foreigners work as teachers at various prathom and mattayom schools. However, Phetchaburi is a largely agricultural town with numerous farms. People in Phetchaburi work in a variety of agriculture-related professions such as farmers, fruiter growers, cowherders and agricultural product vendors.

The people of Phetchaburi engage in a variety of recreational activities. Fishing in the Phetchaburi River is quite popular. Young people can be seen playing football as well the traditional Thai sports, sepaktakraw. Adults and their families travel to Bangkok
Bangkok
Bangkok is the capital and largest urban area city in Thailand. It is known in Thai as Krung Thep Maha Nakhon or simply Krung Thep , meaning "city of angels." The full name of Bangkok is Krung Thep Mahanakhon Amon Rattanakosin Mahintharayutthaya Mahadilok Phop Noppharat Ratchathani Burirom...
, go shopping or attend temples. The elderly can be seen playing Chess and other board games by the riverside.

Cha-am is a popular beach resort for Phetchaburi people as well as travellers from Bangkok and surrounding areas.