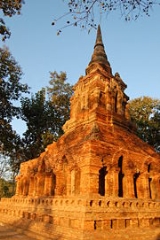 Encyclopedia
Chiang Saen is a district (amphoe
Amphoe
An amphoe is the second level administrative subdivision of Thailand. Usually translated as district, amphoe make up the provinces, and are analogous to a county seat...
) in the northern part of Chiang Rai Province
Chiang Rai Province
Chiang Rai is the northernmost province of Thailand. Neighbouring provinces are Phayao, Lampang and Chiang Mai. In the north it borders Shan State of Myanmar and Bokeo of Laos.-Geography:...
, northern Thailand
Thailand
Thailand , officially the Kingdom of Thailand , formerly known as Siam , is a country located at the centre of the Indochina peninsula and Southeast Asia. It is bordered to the north by Burma and Laos, to the east by Laos and Cambodia, to the south by the Gulf of Thailand and Malaysia, and to the...
. 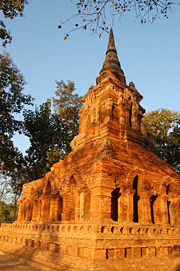 According to an ancient chronicle, the original city of Chiang Saen was built in 545
545
Year 545 was a common year starting on Sunday of the Julian calendar. The denomination 545 for this year has been used since the early medieval period, when the Anno Domini calendar era became the prevalent method in Europe for naming years.- Ireland :* The monastery of Clonmacnoise is built on...
in an area called Yonok
Yonok
Yonok is a village and tambon of Chiang Saen District, in Chiang Rai Province, Thailand. In 2005 it had a total population of 4,777 people. The tambon contains 8 villages....
, by Tai
Tai peoples
The Tai ethnicity refers collectively to the ethnic groups of southern China and Southeast Asia, stretching from Hainan to eastern India and from southern Sichuan to Laos, Thailand, and parts of Vietnam, which speak languages in the Tai family and share similar traditions and festivals, including...
migrants from the Chinese province of Yunnan
Yunnan
Yunnan is a province of the People's Republic of China, located in the far southwest of the country spanning approximately and with a population of 45.7 million . The capital of the province is Kunming. The province borders Burma, Laos, and Vietnam.Yunnan is situated in a mountainous area, with...
, and was an important city (mueang
Mueang
Mueang were historical semi-independent city-states or principalities in present-day Thailand, Laos, parts of northern Vietnam and the Shan State of Myanmar. Smaller Mueang were subordinate to more powerful neighboring Mueang, which in turn were subordinate to the central king, as described in...
) of the Lanna
Lanna
The Kingdom of Lanna was a kingdom centered in present-day northern Thailand from the 13th to 18th centuries. The cultural development of the people of Lanna, the Tai Yuan people, had begun long before as successive Tai Yuan kingdoms preceded Lanna...
Kingdom. No reliable written history of the city exists until the arrival of King Mengrai
Mengrai
King Mangrai was the 25th King of Ngoen Yang and the first King of Chiang Mai , capital of the Lanna Kingdom .-Early years:...
in the 13th century.

The city was sacked by King Kawila during the reign of Rama I because it had been the Burmese base of operations in the preceding years. The city was deserted, while its inhabitants resettled in other Bangkok-allied Lanna cities such as Lampang and Chiang Mai. Several ancient ruins are found in the old cities: for example, Wat Pa Sak hosts a well preserved Lanna style 'Prathat'.

Neighbouring districts are (from the east clockwise) Chiang Khong
Amphoe Chiang Khong
Chiang Khong is a district in the northeastern part of Chiang Rai Province, northern Thailand.-Geography:Neighboring districts are Wiang Kaen, Khun Tan, Phaya Meng Rai, Wiang Chiang Rung, Doi Luang, Chiang Saen of Chiang Rai Province. To the east is Bokeo province of Laos...
, Doi Luang, Mae Chan
Amphoe Mae Chan
Mae Chan is a district in the northern part of Chiang Rai Province, northern Thailand.-Geography:Neighboring districts are Mae Sai, Chiang Saen, Doi Luang, Mueang Chiang Rai and Mae Fa Luang of Chiang Rai Province....
, Mae Sai of Chiang Rai Province. To the north are Shan State
Shan State
Shan State is a state of Burma . Shan State borders China to the north, Laos to the east, and Thailand to the south, and five administrative divisions of Burma in the west. Largest of the 14 administrative divisions by land area, Shan State covers 155,800 km², almost a quarter of the total...
of Myanmar
Myanmar
Burma , officially the Republic of the Union of Myanmar , is a country in Southeast Asia. Burma is bordered by China on the northeast, Laos on the east, Thailand on the southeast, Bangladesh on the west, India on the northwest, the Bay of Bengal to the southwest, and the Andaman Sea on the south....
and Bokeo provinces of Laos
Laos
Laos Lao: ສາທາລະນະລັດ ປະຊາທິປະໄຕ ປະຊາຊົນລາວ Sathalanalat Paxathipatai Paxaxon Lao, officially the Lao People's Democratic Republic, is a landlocked country in Southeast Asia, bordered by Burma and China to the northwest, Vietnam to the east, Cambodia to the south and Thailand to the west...
.

The area around the confluence of the Mekong
Mekong
The Mekong is a river that runs through China, Burma, Laos, Thailand, Cambodia and Vietnam. It is the world's 10th-longest river and the 7th-longest in Asia. Its estimated length is , and it drains an area of , discharging of water annually....
with the Ruak River
Ruak River
The Ruak River is a river at the Thai-Burma border. It originates within the hills of the Shan State , and becomes the boundary river between Thailand and Burma at the confluence with the Mae Sai River at the northernmost point of Thailand. It then meanders to the east until it empties into the...
is called the Golden Triangle
Golden Triangle (Southeast Asia)
The Golden Triangle is one of Asia's two main illicit opium-producing areas. It is an area of around that overlaps the mountains of four countries of Southeast Asia: Burma, Vietnam, Laos, and Thailand. Along with Afghanistan in the Golden Crescent and Pakistan, it has been one of the most...
. This boundary region with Laos and Myanmar is now a popular touristical area, with several casinos on the Burmese side.

The district is subdivided into 6 subdistricts (tambon
Tambon
Tambon is a local government unit in Thailand. Below district and province , they form the third administrative subdivision level. As of the 2009 there are 7255 tambon, not including the 169 khwaeng of Bangkok, which are set at the same administrative level, thus every district contains 8-10 tambon...
), which are further subdivided into 82 villages (muban
Muban
Muban is the lowest administrative subdivision of Thailand. Usually translated as village, they are the subdivision of tambon. As of 2008, there are 74944 administrative villages in Thailand. As of the 1990 census, the average village consisted of 144 households or 746 persons.A muban does not...
). Wiang Chiang Saen is a township (thesaban tambon) which covers parts of tambon Wiang. There are further 6 Tambon administrative organizations (TAO).