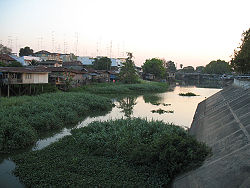 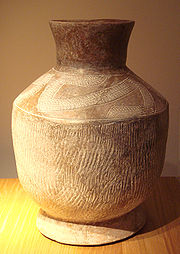 Lopburi is the capital city of Lopburi Province
Lopburi Province
Lop Buri is one of the central provinces of Thailand. Neighboring provinces are Phetchabun, Chaiyaphum, Nakhon Ratchasima, Saraburi, Phra Nakhon Si Ayutthaya, Ang Thong, Sing Buri and Nakhon Sawan.-Geography:...
in Thailand
Thailand
Thailand , officially the Kingdom of Thailand , formerly known as Siam , is a country located at the centre of the Indochina peninsula and Southeast Asia. It is bordered to the north by Burma and Laos, to the east by Laos and Cambodia, to the south by the Gulf of Thailand and Malaysia, and to the...
. It is located about 150 km north-east of Bangkok
Bangkok
Bangkok is the capital and largest urban area city in Thailand. It is known in Thai as Krung Thep Maha Nakhon or simply Krung Thep , meaning "city of angels." The full name of Bangkok is Krung Thep Mahanakhon Amon Rattanakosin Mahintharayutthaya Mahadilok Phop Noppharat Ratchathani Burirom...
. As of 2006 it has a population of 26,500. The town (thesaban mueang) covers the whole tambon
Tambon
Tambon is a local government unit in Thailand. Below district and province , they form the third administrative subdivision level. As of the 2009 there are 7255 tambon, not including the 169 khwaeng of Bangkok, which are set at the same administrative level, thus every district contains 8-10 tambon...
Tha Hin and parts of Thale Chup Son of Mueang Lopburi district, a total area of 6.85 km².

The city has a long history, dating back to the Dvaravati
Dvaravati
The Dvaravati period lasted from the 6th to the 13th centuries. Dvaravati refers to both a culture and a disparate conglomerate of principalities.- History :...
period more than 1000 years ago. According to the Northern Chronicles, it was founded by King Kalavarnadish, who came from Taxila
Taxila
Taxila is a Tehsil in the Rawalpindi District of Punjab province of Pakistan. It is an important archaeological site.Taxila is situated about northwest of Islamabad Capital Territory and Rawalpindi in Panjab; just off the Grand Trunk Road...
(Takkasila) in Northwest India (now Pakistan) in 648 AD. It was originally known as Lavo
Lavo
Known as Lavo during most of its history, Lopburi province is one of the most important cities in the history of Thailand. The city has a long history, dating back into the prehistory period since the bronze age of more than 3,500 years ago....
or Lavapura, meaning "city of Lava
Lava (Ramayana)
Lava or Luv and his twin brother Kusha, were the children of the Lord Rama and his wife Sita, whose story is recounted in the Ramayana. Per that text, he is known as the founder of Lavapuri,that is, the modern day city of Lahore,...
" in reference to the ancient South Asian city of Lavapuri (present-day Lahore
Lahore
Lahore is the capital of the Pakistani province of Punjab and the second largest city in the country. With a rich and fabulous history dating back to over a thousand years ago, Lahore is no doubt Pakistan's cultural capital. One of the most densely populated cities in the world, Lahore remains a...
). Lopburi was under the rising Angkor regime and became one of the most important centers in the Chao Phraya Basin from then on.

Lop Buri (Lavo) is described in Book III of Marco Polo’s Travels, where it is called Locach. This came from the Chinese (Cantonese) pronunciation of Lavo, “Lo-huk” (羅斛). The city is referred to as “Lo-ho” (羅斛) in chapter 20 of the History of Yuan
History of Yuan
The History of Yuan is one of the official Chinese historical works known as the Twenty-Four Histories of China. The historical work consists of 210 chapters chronicling the history of the Genghisid Yuan Dynasty from the time of Genghis Khan to the flight of the last Yuan Emperor Huizong from...
(元史 : Yuán Shǐ), the official history of the Mongol, or Yuan Dynasty
Yuan Dynasty
The Yuan Dynasty , or Great Yuan Empire was a ruling dynasty founded by the Mongol leader Kublai Khan, who ruled most of present-day China, all of modern Mongolia and its surrounding areas, lasting officially from 1271 to 1368. It is considered both as a division of the Mongol Empire and as an...
of China. Due to a scribal error in Book III of Marco Polo’s travels
The Travels of Marco Polo
Books of the Marvels of the World or Description of the World , also nicknamed Il Milione or Oriente Poliano and commonly called The Travels of Marco Polo, is a 13th-century travelogue written down by Rustichello da Pisa from stories told by Marco Polo, describing the...
treating of the route southward from Champa
Champa
The kingdom of Champa was an Indianized kingdom that controlled what is now southern and central Vietnam from approximately the 7th century through to 1832.The Cham people are remnants...
, where the name Java was substituted for Champa as the point of departure, Java Minor was located 1,300 miles to the south of Java Major, instead of from Champa, on or near an extension of the Terra Australis
Terra Australis
Terra Australis, Terra Australis Ignota or Terra Australis Incognita was a hypothesized continent appearing on European maps from the 15th to the 18th century...
. As explained by Sir Henry Yule, the editor of an English edition of Marco Polo’s Travels: “Some geographers of the 16th century, following the old editions which carried the travellers south-east of Java to the land of Boeach (or Locac), introduced in their maps a continent in that situation”.

After the foundation of Ayutthaya Kingdom in the fourteenth century, Lopburi was a stronghold of Ayutthaya's rulers. It later became a new royal capital during the reign of King Narai
Narai
Somdet Phra Narai or Somdet Phra Ramathibodi III was the king of Ayutthaya from 1656 to 1688 and arguably the most famous Ayutthayan king. His reign was the most prosperous during the Ayutthaya period and saw the great commercial and diplomatic activities with foreign nations including the...
the Great of the Ayutthaya kingdom
Ayutthaya kingdom
Ayutthaya was a Siamese kingdom that existed from 1350 to 1767. Ayutthaya was friendly towards foreign traders, including the Chinese, Vietnamese , Indians, Japanese and Persians, and later the Portuguese, Spanish, Dutch and French, permitting them to set up villages outside the walls of the...
in the middle of the 17th century and the king stayed here for about eight months a year.

Today the city is most famous for the hundreds of Crab-Eating Macaque
Crab-eating Macaque
The Crab-eating macaque is a cercopithecine primate native to Southeast Asia. It is also called the "long-tailed macaque", and is referred to as the "cynomolgus monkey" in laboratories.-Etymology:...
s (Macaca fascicularis) that live in the middle of the city, especially around the Khmer
Khmer Empire
The Khmer Empire was one of the most powerful empires in Southeast Asia. The empire, which grew out of the former kingdom of Chenla, at times ruled over and/or vassalized parts of modern-day Laos, Thailand, Vietnam, Burma, and Malaysia. Its greatest legacy is Angkor, the site of the capital city...
temple, Prang Sam Yot, and a Khmer shrine, Sarn Phra Karn. They are fed by the local people, especially during the Monkey Festival in November. Because they are not afraid of humans, they steal whatever food they can find from unwary diners.

Prang Sam Yot, originally a Hindu
Hindu
Hindu refers to an identity associated with the philosophical, religious and cultural systems that are indigenous to the Indian subcontinent. As used in the Constitution of India, the word "Hindu" is also attributed to all persons professing any Indian religion...
shrine, has three prang
Prang (architecture)
A prang is a tall finger-like spire, usually richly carved. This was a common feature of Khmer religious architecture and was later adopted by Thai builders, typically in the Ayutthaya and Bangkok periods. In Thailand it appears only with the most important religious buildings.The first Prangs in...
s that represent Brahma
Brahma
Brahma is the Hindu god of creation and one of the Trimurti, the others being Vishnu and Shiva. According to the Brahma Purana, he is the father of Mānu, and from Mānu all human beings are descended. In the Ramayana and the...
, Vishnu
Vishnu
Vishnu is the Supreme god in the Vaishnavite tradition of Hinduism. Smarta followers of Adi Shankara, among others, venerate Vishnu as one of the five primary forms of God....
, and Shiva
Shiva
Shiva is a major Hindu deity, and is the destroyer god or transformer among the Trimurti, the Hindu Trinity of the primary aspects of the divine. God Shiva is a yogi who has notice of everything that happens in the world and is the main aspect of life. Yet one with great power lives a life of a...
(the Hindu trinity). It was later converted to a Buddhist shrine.