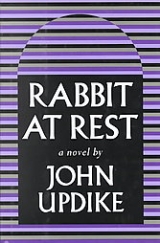 The novel is part of a series that follows the exploits of Harry "Rabbit" Angstrom from 1960–1990. Rabbit at Rest focuses on the years 1988-1989. It finds Harry nearly forty years after his glory days as a high school basketball star in a mid-sized Pennsylvania
Pennsylvania
The Commonwealth of Pennsylvania is a U.S. state that is located in the Northeastern and Mid-Atlantic regions of the United States. The state borders Delaware and Maryland to the south, West Virginia to the southwest, Ohio to the west, New York and Ontario, Canada, to the north, and New Jersey to...
city. Harry and his wife of 33 years, Janice, have retired to sunny Florida
Florida
Florida is a state in the southeastern United States, located on the nation's Atlantic and Gulf coasts. It is bordered to the west by the Gulf of Mexico, to the north by Alabama and Georgia and to the east by the Atlantic Ocean. With a population of 18,801,310 as measured by the 2010 census, it...
during the cold months, where Harry is depressed, bored, and dangerously overweight.

Unable to stop nibbling corn chips, macadamia nuts and other junk food, Rabbit finds himself near death after a heart attack while sunfishing with his nine-year-old granddaughter Judy. In a "redemption" of the drowning death of his infant daughter Rebecca in the earlier novel Rabbit, Run
Rabbit, Run
Rabbit, Run is a 1960 novel by John Updike.The novel depicts five months in the life of a 26-year-old former high school basketball player named Harry 'Rabbit' Angstrom, and his attempts to escape the constraints of his life...
, he saves Judy from drowning during this incident.

He is distracted from his health worries by the acts of his drug-addicted son, Nelson, to whom Janice has very unwisely given control of the family business, a Pennsylvania Toyota dealership. The discovery that Nelson has been stealing from the company to support his drug habit leads to Harry losing the family business. Despite his problems and growing unhappiness, he manages to take some comfort in Judy, who has turned out to be beautiful and attractive, a reminder of himself in his high-school glory days. He is less attached to his four-year-old grandson Roy, who seems wary and fearful of Rabbit, much like Nelson.

While recuperating from heart surgery, Rabbit recognizes one of the nurses, Annabelle Byer, as the young woman he believes is his illegitimate daughter by his old girlfriend Ruth. He becomes friendly with her but decides not to identify himself as her possible father. Around this time, his long-term mistress Thelma Harrison (wife of his high-school nemesis Ron) dies of lupus
Lupus
Lupus most commonly refers to the disease systemic lupus erythematosus.Lupus may also refer to:-Medicine:* Lupus erythematosus, a chronic autoimmune disease with several different forms...
.
Ron angrily confronts Harry at the funeral, but the men later reconcile while playing golf. Harry also sees Cindy Murkett at the funeral, a woman he had sexually obsessed over ten years ago, and is saddened to see she has become an obese and bitter divorcee.

After Nelson comes back from rehab, and Janice begins work as a real estate agent, the family finds out that Harry has had a one-night stand with Pru, Nelson's wife, on the night after he was released from the hospital. Janice's anger over this betrayal prompts Harry to escape to Florida. While in hiding, Harry has a heart attack shortly after winning a one-on-one basketball game with a local youth (echoing the opening of Rabbit, Run
Rabbit, Run
Rabbit, Run is a 1960 novel by John Updike.The novel depicts five months in the life of a 26-year-old former high school basketball player named Harry 'Rabbit' Angstrom, and his attempts to escape the constraints of his life...
in which Harry impulsively joins a group of teenagers playing basketball). Nelson and Janice manage to get to his bedside while Harry is still alive; his wife forgives him, and he reconciles with his son.