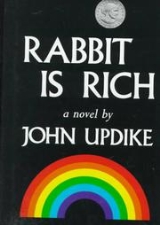 Encyclopedia
Rabbit Is Rich is a 1981 novel by John Updike
John Updike
John Hoyer Updike was an American novelist, poet, short story writer, art critic, and literary critic....
. It is the third novel of the four-part series which begins with Rabbit, Run
Rabbit, Run
Rabbit, Run is a 1960 novel by John Updike.The novel depicts five months in the life of a 26-year-old former high school basketball player named Harry 'Rabbit' Angstrom, and his attempts to escape the constraints of his life...
and Rabbit Redux
Rabbit Redux
Rabbit Redux is a 1971 novel by John Updike. It is the second book in his "Rabbit" series, beginning with Rabbit, Run and followed by Rabbit Is Rich, Rabbit At Rest, and the related 2001 novella, Rabbit Remembered.-Plot summary:...
, and concludes with Rabbit At Rest
Rabbit At Rest
Rabbit at Rest is a 1990 novel by John Updike. It is the fourth and final novel in a series beginning with Rabbit, Run; Rabbit Redux; and Rabbit is Rich. There is also a related 2001 novella, Rabbit Remembered...
. There is also a related 2001 novella, Rabbit Remembered
Rabbit Remembered
Rabbit Remembered is a 2001 novella by John Updike, and a sequel to his "Rabbit" series. It first appeared in his collection of short fiction titled Licks of Love....
. Rabbit Is Rich was awarded the Pulitzer Prize for Fiction
Pulitzer Prize for Fiction
The Pulitzer Prize for Fiction has been awarded for distinguished fiction by an American author, preferably dealing with American life. It originated as the Pulitzer Prize for the Novel, which was awarded between 1918 and 1947.-1910s:...
and the National Book Award
National Book Award
The National Book Awards are a set of American literary awards. Started in 1950, the Awards are presented annually to American authors for literature published in the current year. In 1989 the National Book Foundation, a nonprofit organization which now oversees and manages the National Book...
for Fiction in 1982, as well as the National Book Critics Circle Award
National Book Critics Circle Award
The National Book Critics Circle Award is an annual award given by the National Book Critics Circle to promote the finest books and reviews published in English....
for Fiction in 1981.

This third novel of Updike's Rabbit series examines the life of Harry "Rabbit" Angstrom, a one-time high school basketball star, who has reached a paunchy middle-age without relocating from Brewer, Pennsylvania
Pennsylvania
The Commonwealth of Pennsylvania is a U.S. state that is located in the Northeastern and Mid-Atlantic regions of the United States. The state borders Delaware and Maryland to the south, West Virginia to the southwest, Ohio to the west, New York and Ontario, Canada, to the north, and New Jersey to...
, the poor, fictional city of his birth. Harry and Janice, his wife of twenty-two years, live comfortably, having inherited her late father's Toyota dealership. He is indeed rich, but Harry's persistent problems — his wife's drinking, his troubled son's schemes, his libido, and spectres from his past — complicate life. Having achieved a lifestyle that would have embarrassed his working-class parents, Harry is not greedy, but neither is he ever quite satisfied. Harry has become somewhat enamored of a country-club friend's young wife. He also has to deal with the indecision and irresponsibility of Nelson, his son, who is a student at Kent State University
Kent State University
Kent State University is a public research university located in Kent, Ohio, United States. The university has eight campuses around the northeast Ohio region with the main campus in Kent being the largest...
. Throughout the book, Harry wonders about his former lover Ruth, and whether she had ever given birth to their child.