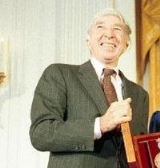 Overview
John Hoyer Updike was an American novelist, poet, short story
Short story
A short story is a work of fiction that is usually written in prose, often in narrative format. This format tends to be more pointed than longer works of fiction, such as novellas and novels. Short story definitions based on length differ somewhat, even among professional writers, in part because...
writer, art critic
Art critic
An art critic is a person who specializes in evaluating art. Their written critiques, or reviews, are published in newspapers, magazines, books and on web sites...
, and literary critic.

Updike's most famous work is his Harry "Rabbit" Angstrom series (the novels Rabbit, Run
Rabbit, Run
Rabbit, Run is a 1960 novel by John Updike.The novel depicts five months in the life of a 26-year-old former high school basketball player named Harry 'Rabbit' Angstrom, and his attempts to escape the constraints of his life...
; Rabbit Redux
Rabbit Redux
Rabbit Redux is a 1971 novel by John Updike. It is the second book in his "Rabbit" series, beginning with Rabbit, Run and followed by Rabbit Is Rich, Rabbit At Rest, and the related 2001 novella, Rabbit Remembered.-Plot summary:...
; Rabbit Is Rich
Rabbit Is Rich
Rabbit Is Rich is a 1981 novel by John Updike. It is the third novel of the four-part series which begins with Rabbit, Run and Rabbit Redux, and concludes with Rabbit At Rest. There is also a related 2001 novella, Rabbit Remembered...
; Rabbit At Rest
Rabbit At Rest
Rabbit at Rest is a 1990 novel by John Updike. It is the fourth and final novel in a series beginning with Rabbit, Run; Rabbit Redux; and Rabbit is Rich. There is also a related 2001 novella, Rabbit Remembered...
; and the novella "Rabbit Remembered
Rabbit Remembered
Rabbit Remembered is a 2001 novella by John Updike, and a sequel to his "Rabbit" series. It first appeared in his collection of short fiction titled Licks of Love....
"), which chronicles Rabbit's life over the course of several decades, from young adulthood to his death. Both Rabbit Is Rich (1981) and Rabbit At Rest (1990) received the Pulitzer Prize
Pulitzer Prize for Fiction
The Pulitzer Prize for Fiction has been awarded for distinguished fiction by an American author, preferably dealing with American life. It originated as the Pulitzer Prize for the Novel, which was awarded between 1918 and 1947.-1910s:...
. Updike is one of only three authors (the others were Booth Tarkington
Booth Tarkington
Booth Tarkington was an American novelist and dramatist best known for his Pulitzer Prize-winning novels The Magnificent Ambersons and Alice Adams...
and William Faulkner
William Faulkner
William Cuthbert Faulkner was an American writer from Oxford, Mississippi. Faulkner worked in a variety of media; he wrote novels, short stories, a play, poetry, essays and screenplays during his career...
) to win the Pulitzer Prize for Fiction more than once.

Could someone please tell me where in Updike's prose writing appeared the phrase "mauve interregnum" to describe the fin de siècle? I know I read it ...

Can anyone tell me which John Updike book mentions an Art Deco House in his hometown of Shillington, PA?
More

The city overwhelmed our expectations. The Kiplingesque grandeur of Waterloo Station, the Eliotic despondency of the brick row in Chelsea … the Dickensian nightmare of fog and sweating pavement and besmirched cornices.

If men do not keep on speaking terms with children, they cease to be men, and become merely machines for eating and for earning money.

A healthy male adult bore consumes each year one and a half times his own weight in other people's patience.

The refusal to rest content, the willingness to risk excess on behalf of one's obsessions, is what distinguishes artists from entertainers, and what makes some artists adventurers on behalf of us all.

On J. D. Salinger, in Studies in J. D. Salinger : Reviews, Essays, and Critiques of The Catcher in the Rye and other Fiction (1963) edited by Marvin Laser and Norman Fruman, p. 231; also quoted in The Christian Science Monitor (August 26, 1965)

I would especially like to recourt the Muse of poetry, who ran off with the mailman four years ago, and drops me only a scribbled postcard from time to time.

Suspect each moment, for it is a thief, tiptoeing away with more than it brings.

When I write, I aim in my mind not toward New York but toward a vague spot a little to the east of Kansas.

Each morning my characters greet me with misty faces willing, though chilled, to muster for another day's progress through the dazzling quicksand the marsh of blank paper.

“Marching through a Novel” in Tossing and Turning (1977)

I think “taste” is a social concept and not an artistic one. I’m willing to show good taste, if I can, in somebody else’s living room, but our reading life is too short for a writer to be in any way polite. Since his words enter into another’s brain in silence and intimacy, he should be as honest and explicit as we are with ourselves.

I love my government not least for the extent to which it leaves me alone.

Testimony given before the Subcommittee on Select Education of the House of Representatives Committee on Education and Labor, Boston, Massachusetts (30 January 1978)
More
x