Encyclopedia
The Roman-Germanic Museum (RGM, in German
German language
German is a West Germanic language, related to and classified alongside English and Dutch. With an estimated 90 – 98 million native speakers, German is one of the world's major languages and is the most widely-spoken first language in the European Union....
: Römisch-Germanisches Museum) is an important archaeological
Archaeology
Archaeology, or archeology , is the study of human society, primarily through the recovery and analysis of the material culture and environmental data that they have left behind, which includes artifacts, architecture, biofacts and cultural landscapes...
museum in Cologne
Cologne
Cologne is Germany's fourth-largest city , and is the largest city both in the Germany Federal State of North Rhine-Westphalia and within the Rhine-Ruhr Metropolitan Area, one of the major European metropolitan areas with more than ten million inhabitants.Cologne is located on both sides of the...
, Germany
Germany
Germany , officially the Federal Republic of Germany , is a federal parliamentary republic in Europe. The country consists of 16 states while the capital and largest city is Berlin. Germany covers an area of 357,021 km2 and has a largely temperate seasonal climate...
. It has a large collection of Roman
Ancient Rome
Ancient Rome was a thriving civilization that grew on the Italian Peninsula as early as the 8th century BC. Located along the Mediterranean Sea and centered on the city of Rome, it expanded to one of the largest empires in the ancient world....
artifacts from the Roman settlement of Colonia Claudia Ara Agrippinensium
Colonia Claudia Ara Agrippinensium
Colonia Claudia Ara Agrippinensium was the name of the Roman colony in the Rhineland out of which the German city of Cologne developed.It was the capital of the Roman province of Germania Inferior and the headquarters of the military in the region. With the administrative reforms under Diocletian,...
, on which modern Cologne is built. The museum protects the original site of a Roman town villa
Roman villa
A Roman villa is a villa that was built or lived in during the Roman republic and the Roman Empire. A villa was originally a Roman country house built for the upper class...
, from which a large Dionysus
Dionysus
Dionysus was the god of the grape harvest, winemaking and wine, of ritual madness and ecstasy in Greek mythology. His name in Linear B tablets shows he was worshipped from c. 1500—1100 BC by Mycenean Greeks: other traces of Dionysian-type cult have been found in ancient Minoan Crete...
mosaic
Mosaic
Mosaic is the art of creating images with an assemblage of small pieces of colored glass, stone, or other materials. It may be a technique of decorative art, an aspect of interior decoration, or of cultural and spiritual significance as in a cathedral...
remains in its original place in the basement, and the related Roman Road
Roman road
The Roman roads were a vital part of the development of the Roman state, from about 500 BC through the expansion during the Roman Republic and the Roman Empire. Roman roads enabled the Romans to move armies and trade goods and to communicate. The Roman road system spanned more than 400,000 km...
just outside. In this respect the museum is an archaeological site.

The museum also has the task of preserving the Roman cultural heritage of Cologne, and therefore houses an extensive collection of Roman glass
Roman glass
Roman glass objects have been recovered across the Roman Empire in domestic, industrial and funerary contexts. Glass was used primarily for the production of vessels, although mosaic tiles and window glass were also produced. Roman glass production developed from Hellenistic technical traditions,...
from funerals and burials
Roman funerals and burial
Ancient Roman funerary practices were part of the mos maiorum, "tradition," that is, "the way of the ancestors," and drew on the beliefs embodied in Roman public and domestic religion....
and also exercises archaeological supervision over the construction of the Cologne underground
Cologne Stadtbahn
The Cologne Stadtbahn is a light rail system in the German city of Cologne, including several surrounding cities...
. 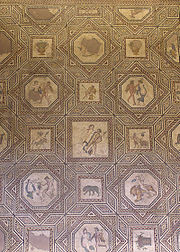 The Römisch-Germanisches Museum, which opened in 1974, is near the Cologne Cathedral
Cologne Cathedral
Cologne Cathedral is a Roman Catholic church in Cologne, Germany. It is the seat of the Archbishop of Cologne and the administration of the Archdiocese of Cologne. It is renowned monument of German Catholicism and Gothic architecture and is a World Heritage Site...
on the site of a 3rd-century villa. The villa was discovered in 1941 during the construction of an air-raid shelter. On the floor of the main room of the villa is the renowned Dionysus mosaic. Since the mosaic could not be moved easily, the architects Klaus Renner and Heinz Röcke designed the museum around the mosaic. The inner courtyards of the museum mimic the layout of the ancient villa. 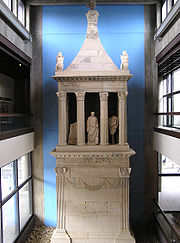 On the night of 18 January 2007, the storm Kyrill blew a sheet of plywood through the glass front of the museum right onto the Dionysus mosaic. The damage was repaired within a week.

The museum has the world's largest collection of locally produced glass from the Roman period.