Mathematicians of Ancient Greece
Greek mathematics
Greek mathematics, as that term is used in this article, is the mathematics written in Greek, developed from the 7th century BC to the 4th century AD around the Eastern shores of the Mediterranean. Greek mathematicians lived in cities spread over the entire Eastern Mediterranean, from Italy to...
, according to the Pythagorean
Pythagoreanism
Pythagoreanism was the system of esoteric and metaphysical beliefs held by Pythagoras and his followers, the Pythagoreans, who were considerably influenced by mathematics. Pythagoreanism originated in the 5th century BCE and greatly influenced Platonism...
doctrine, understood calculation of area
Area
Area is a quantity that expresses the extent of a two-dimensional surface or shape in the plane. Area can be understood as the amount of material with a given thickness that would be necessary to fashion a model of the shape, or the amount of paint necessary to cover the surface with a single coat...
as the process of constructing geometrically a square
Square (geometry)
In geometry, a square is a regular quadrilateral. This means that it has four equal sides and four equal angles...
having the same area (squaring). That is why the process was named quadrature. For example, a Quadrature of the circle, Lune of Hippocrates
Lune of Hippocrates
In geometry, the lune of Hippocrates, named after Hippocrates of Chios, is a lune bounded by arcs of circles, one of which passes through the center of the other and has half the area of the other...
, The Quadrature of the Parabola
The Quadrature of the Parabola
The Quadrature of the Parabola is a treatise on geometry, written by Archimedes in the 3rd century BC. Written as a letter to his friend Dositheus, the work presents 24 propositions regarding parabolas, culminating in a proof that the area of a parabolic segment is 4/3 that of a certain inscribed...
. This construction must be performed only by means of compass and straightedge.
For a quadrature of a rectangle with the sides a and b it is necessary to construct a square with the side

(the Geometric mean
Geometric mean
The geometric mean, in mathematics, is a type of mean or average, which indicates the central tendency or typical value of a set of numbers. It is similar to the arithmetic mean, except that the numbers are multiplied and then the nth root of the resulting product is taken.For instance, the...
of a and b). For this purpose it is possible to use the following fact: if we draw the circle with the sum of a and b as the diameter, then the height BH (from a point of their connection to crossing with a circle) equals their geometric mean. The similar geometrical construction solves a problem of a quadrature for a parallelogram and a triangle. 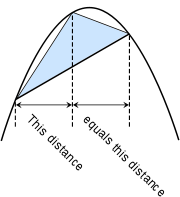 Problems of quadrature for curvilinear figures are much more difficult. The quadrature of the circle with compass and straightedge had been proved in the 19th century to be impossible. Nevertheless, for some figures (for example Lune of Hippocrates
Lune of Hippocrates
In geometry, the lune of Hippocrates, named after Hippocrates of Chios, is a lune bounded by arcs of circles, one of which passes through the center of the other and has half the area of the other...
) a quadrature can be performed. The quadratures of a sphere surface and a parabola segment
The Quadrature of the Parabola
The Quadrature of the Parabola is a treatise on geometry, written by Archimedes in the 3rd century BC. Written as a letter to his friend Dositheus, the work presents 24 propositions regarding parabolas, culminating in a proof that the area of a parabolic segment is 4/3 that of a certain inscribed...
done by Archimedes
Archimedes
Archimedes of Syracuse was a Greek mathematician, physicist, engineer, inventor, and astronomer. Although few details of his life are known, he is regarded as one of the leading scientists in classical antiquity. Among his advances in physics are the foundations of hydrostatics, statics and an...
became the highest achievement of the antique analysis.
For the proof of the results Archimedes used the Method of exhaustion
Method of exhaustion
The method of exhaustion is a method of finding the area of a shape by inscribing inside it a sequence of polygons whose areas converge to the area of the containing shape. If the sequence is correctly constructed, the difference in area between the n-th polygon and the containing shape will...
of Eudoxus
Eudoxus of Cnidus
Eudoxus of Cnidus was a Greek astronomer, mathematician, scholar and student of Plato. Since all his own works are lost, our knowledge of him is obtained from secondary sources, such as Aratus's poem on astronomy...
.

In medieval Europe the quadrature meant calculation of area by any method. More often the Method of indivisibles was used; it was less rigorous, but more simple and powerful. With its help Galileo Galilei
Galileo Galilei
Galileo Galilei , was an Italian physicist, mathematician, astronomer, and philosopher who played a major role in the Scientific Revolution. His achievements include improvements to the telescope and consequent astronomical observations and support for Copernicanism...
and Gilles de Roberval
Gilles de Roberval
Gilles Personne de Roberval , French mathematician, was born at Roberval, Oise, near Beauvais, France. His name was originally Gilles Personne or Gilles Personier, that of Roberval, by which he is known, being taken from the place of his birth.Like René Descartes, he was present at the siege of La...
found the area of a cycloid
Cycloid
A cycloid is the curve traced by a point on the rim of a circular wheel as the wheel rolls along a straight line.It is an example of a roulette, a curve generated by a curve rolling on another curve....
arch, Grégoire de Saint-Vincent
Grégoire de Saint-Vincent
Grégoire de Saint-Vincent , a Jesuit, was a mathematician who discovered that the area under a rectangular hyperbola is the same over [a,b] as over [c,d] when a/b = c/d...
investigated the area under a hyperbola
Hyperbola
In mathematics a hyperbola is a curve, specifically a smooth curve that lies in a plane, which can be defined either by its geometric properties or by the kinds of equations for which it is the solution set. A hyperbola has two pieces, called connected components or branches, which are mirror...
(Opus Geometricum, 1647), and Alphonse Antonio de Sarasa
Alphonse Antonio de Sarasa
Alphonse Antonio de Sarasa was a Jesuit mathematician who contributed to the understanding of logarithms, particularly as areas under a hyperbola....
, de Saint-Vincent's pupil and commentator noted the relation of this area to logarithm
Logarithm
The logarithm of a number is the exponent by which another fixed value, the base, has to be raised to produce that number. For example, the logarithm of 1000 to base 10 is 3, because 1000 is 10 to the power 3: More generally, if x = by, then y is the logarithm of x to base b, and is written...
s.

John Wallis algebrised this method: he wrote in his Arithmetica Infinitorum (1656) series which we now call the definite integral, and he calculated their values. Isaac Barrow
Isaac Barrow
Isaac Barrow was an English Christian theologian, and mathematician who is generally given credit for his early role in the development of infinitesimal calculus; in particular, for the discovery of the fundamental theorem of calculus. His work centered on the properties of the tangent; Barrow was...
and James Gregory made further progress: quadratures for some algebraic curves and spiral
Spiral
In mathematics, a spiral is a curve which emanates from a central point, getting progressively farther away as it revolves around the point.-Spiral or helix:...
s. Christiaan Huygens successfully performed a quadrature of some Solids of revolution
Solid of revolution
In mathematics, engineering, and manufacturing, a solid of revolution is a solid figure obtained by rotating a plane curve around some straight line that lies on the same plane....
.

The quadrature of the hyperbola by Saint-Vincent and de Sarasa provided a new function, the natural logarithm
Natural logarithm
The natural logarithm is the logarithm to the base e, where e is an irrational and transcendental constant approximately equal to 2.718281828...
, of critical importance. With the invention of integral calculus came a universal method for area calculation. In response, the term quadrature has become traditional, and instead the modern phrase "computation of a univariate definite integral" is preferred.